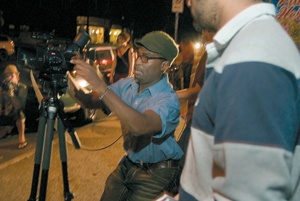 Is Howard Mitchell El Gato Negro? Or is El Gato Negro Howard Mitchell? Even the artist himself has trouble differentiating the two at times.
"I like reinventing myself," Mitchell told The Skanner about his penname, given to him by friends some years ago.
The independent filmmaker, formerly of Seattle, has been living in Portland for 8 months now and has already nearly completed filming a shoestring budget short film, "Throwing Rocks at Boys," about the friendship and struggles of life between two young women.
On the set – which has been filming at various locations around Portland for the last several weeks – Mitchell says he is extremely serious. Sometimes, he admits, he borders on the tyrannical.
"I realized I could be quite difficult," he says. "I get very serious on set. … It's not a democracy."
Which could be why he feels the need to be called "El Gato Negro" when he's working. With a very limited budget, underpaid cast and crew and limited time and patience from everyone on set, El Gato says if he misses that golden window of opportunity during a scene, it can mean life or death for a film that tells an entire story in 24 minutes.
"This film is so important for generating future financing," he said.
The latest story El Gato is trying to tell revolves around two friends whose lives grew apart a decade ago. Much of the film is about the past, as one of the women, Tracie, learns that her childhood friend, Autumn, has just died from cancer at age 32. Recalling a life that once held so much promise, Tracie (Megan Mesloh) remembers what a powder keg of a girl Autumn (Rachael Millen) once was, and how boys, as well as an undisclosed past, threatened to come between a pair once called the "Wonder Twins."

Diverse Roots
Born in Panama in a multicultural household, Mitchell ultimately grew up in New Jersey. After spending time in Seattle, the fledgling filmmaker came south to the Rose City. Mitchell says Portland is a big change from living among a dense population of Blacks, Hispanics, Cubans and others. In a way, the cast of his film represents much of the monoculture of Portland – quite White.
"I wanted a real diverse and unique cast," he says, while admitting that he's been very impressed with the actors. Many have never before acted in a film – an attribute Mitchell says keeps the scenes lively and unexpected. He says he feels reticent to over-direct one of the main characters – afraid to disrupt acting that "can be so beautiful and profound.
He says his scripts are diagrams, but often are changed on set.
"So much of preproduction is about planning," he says. "You have to do it well to be freewheeling and improvisational. You can't do that on the set unless it's so damn planned."
Although Mitchell says his multicultural background is always a part of the work he creates, he didn't write his current characters with a set ethnicity in mind. In "Throwing Rocks," he was more interested in exploring the struggles of women and the interesting ways they interact with each other and the world. But even though all his actors are White, Mitchell says it remains a work of a Black man.
"If it's my perspective, it's going to be a Black perspective," he says.
But he also wants it to be a realistic perspective, as if the audience were merely eavesdropping on a secret conversation. The trouble – and possibly the gift – of filmmaking, is that it is pretty easy to pick out when somebody's faking an emotion or a director leads his story in the wrong direction. Which is why he doesn't censor himself or let anyone tell him something can't be done.
"With film, you can't bullshit," he says. "I'm not interested in making YouTube videos."
Mitchell hopes to launch his film on the festival circuit when it is finished sometime this fall.