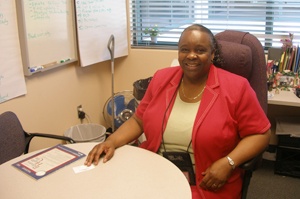 After more than 33 years of service to the county, Wilma Smith, Oregon's first African American Pediatric Nurse Practitioner, will be retiring.
Her retirement comes at a time when there aren't many nurse practitioners of color to take her place.
Smith says she entered the profession in Mississippi, at a time when few Blacks were being admitted to historically White colleges.
"I couldn't get into the University of Mississippi in 1965 because at the time they only let in the token Black," Smith says, who didn't let it get her down. Like most things in life, Smith says every time she saw one door close, another would open. After community college, and completion of nursing school at the University of Mississippi (the school finally admitted her) where she was one of the first graduates of the nurse practitioner program, she began working the orthopedic floor at St. Dominic's Hospital in Jackson, Miss.
After transferring to a community health clinic, Smith was promoted to director of nursing at the ripe old age of 24. After pursuing such a career path, why did she want to study to become a pediatric nurse practitioner?
"I didn't," she said with a laugh. Although she had always loved children – she grew up second oldest out of 17 siblings — the thought of returning to school didn't appeal to her. But a persuasive doctor convinced her otherwise.
"It was the hardest thing I'd ever done," she says of nurse practitioner school.
Apart from breaking ground by being a first – Smith has been advocating for the health, well-being and understanding of the health differences of African Americans for years.
"There were a few myths I had to deal with," she said.
First off, nurse practitioners are only a few steps down from being doctors. They perform routine checkups and physicals, can prescribe medicine and often have to make the decision on whether to refer something to a doctor or not. After moving to Portland in 1974, she was promised a job with Kaiser Permanente – a job that would split duties between Portland and Vancouver. But after she received her nursing certification, Kaiser wouldn't return her phone calls. She found out later that several doctors had reportedly said that people in Vancouver weren't quite ready for an African American nurse.
"It was a blessing in disguise," she says, without a hint of bitterness or remorse. After coming from the racial climate of Mississippi, where imbedded racism was a daily fact of life, Smith said she understood why people felt that way – many had been raised that way. "And maybe they weren't ready."
But what was even clearer was how unready nurses and doctors were in Oregon to properly treat African Americans. After starting a job with the Multnomah County Health Department in 1975, Smith tried to change all that.
It was the little things that made visiting a doctor a negative experience for many African Americans. She said doctors and nurses would give bad advice on using hair oil and weren't educated about why alcohol cotton swabs always seem "dirty" after wiping the skin of a person of color.
"Instead of telling them 'don't use oil' we told them not to use it directly on their scalp," she said.
And what about that "dirt" on alcohol swabs before an injection? It's simply naturally occurring shedding skin – the same as anyone else. The difference? Skin pigments, she says. Her findings were finally published with Kathy Burns in the March/April 1999 edition of the Journal of Pediatric Health under the title "Managing the Hair and Skin of African American Patients."
While the issues might seem trivial, she says it helps improve the self-esteem of patients and the understanding of the racial differences for nurses and doctors.
While the North Portland community will be losing one of the only African American nurse practitioners for the county, Smith says she won't stop helping people. She plans to focus on improving the conditions of nursing homes and also deal with issues relating to health education – helping regular people understand what kind of questions they need to ask during doctor's visits and how to be proactive about dealing with their health and medications.
"I don't know how much I'll be able to let go of," she said about her career.