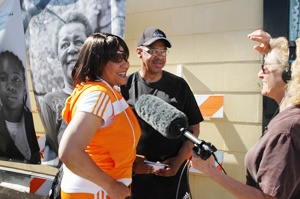 The Skanner photographer Julie Keefe, in collaboration with the arts nonprofit training organization Caldera, has just completed the largest public art project in Oregon history.
"Hello Neighbor" put cameras in the hands of teenagers over half the state – and the resulting artwork is currently hung on gigantic prints hung outdoors in neighborhoods from Madras to Northeast Killingsworth Avenue.
"I have lived in this neighborhood for decades, and have only in the last six or seven years faced the gentrification issues," Keefe said.
When she first moved into the Mississippi neighborhood in 1991, Keefe says, she realized the longtime residents viewed her as an outsider.
Yet over the years – as neighbors on opposite sides of the racial divide confronted crime and street violence together, and as their children grew up together – they became friends.
"For all these years, I've been thinking about how do you deal with these issues without saying, 'everything about gentrification is bad'?"
One day, as she chatted over the fence with her next-door neighbor, Vesia Loving, Keefe realized that many of the newest residents on her block don't know how to simply say "hello."
"Mrs. Loving didn't want crack dealers on the corner either – everyone wants their children to be safe," Keefe says. "But everyone agrees the word gentrification means tearing down old buildings and making more money."
Keefe says the entire Hello Neighbor project was inspired by local resident Charles Ford. Years ago, Keefe says, Ford turned to her and said, "I don't mind if new people move into the neighborhood, I just mind if they don't say hello anymore."
As a professional photographer who also teaches the art to youth, Keefe says she brainstormed a way to build bridges between youth and adults, neighbors and newcomers.
"I thought, what if I got kids from the neighborhood to go talk to their neighbors and decide how to photograph them? And then I thought, how poignant to put the kids' thoughts on what they feel about their neighborhoods next to that?"
Keefe and Caldera eventually traveled to 10 middle schools across the state, involving hundreds of students and their neighbors.
In each town, teenagers fanned out to choose which neighbor they wanted to get to know better. First they met with their subjects and chatted. Then they thought about how the neighbors could be photographed, and then the teens returned to the neighbor and actually took the photos.
"When people find out that kids took the photos, they are really surprised," Keefe says.
In one neighborhood, a teenager decided to interview the Korean grocery store owner on the corner near her house.
Keefe says that, when a woman in the neighborhood found out the child had decided to get to know the grocer, she said, 'I wonder what possessed her to choose him?'
"But the thing is, that kid went into Mr. Lee's grocery store every day before school to buy a snack – that's why she chose him, to get to know him better," Keefe says. "Once the kids sit down with an adult and begin to talk to them, the neighborhood healing begins."
Keefe recalls one day when a whole busload of teenagers went on a tour to meet each others' chosen neighbors. They all ended up at the doorstep of Fay and Tommie Washington in North Portland, who – despite the crowded porch full of teenagers — graciously sat everyone down for a long visit.
"The kids were asking him questions like, 'what inspires you,' 'do you feel safe in your neighborhood,' 'what are your goals in life,'" Keefe said. "The kids came up with their own questions, and it's so cute when they ask a 60 year old man things like, 'who's your best friend?'"
The result is 110 seven by five-foot banners, each divided into two black and white photographs; on one side is the photo the kid took – the other is a photo of the kid. Each photo has a short note scrawled somewhere on it, in the subject's own handwriting. Each note depicts a deep feeling, or a hopeful aspiration, about the person in the photo.
One banner, depicting a Black teenaged girl, says, "I hope to go to the Olympics for gymnastics."
Another, of a White woman, says, "I feel very safe in my community. I feel very lucky that way because I don't think everybody does."
Each banner links the two people pictured; in each banner, the two people are neighbors.
"We were trying to show the community it's members," one student writes in his artist's statement about the project. "To show the cultural diversity they have and that sometimes you have to look underneath the underneath."
"I have the feeling this is what art should be," Keefe says.