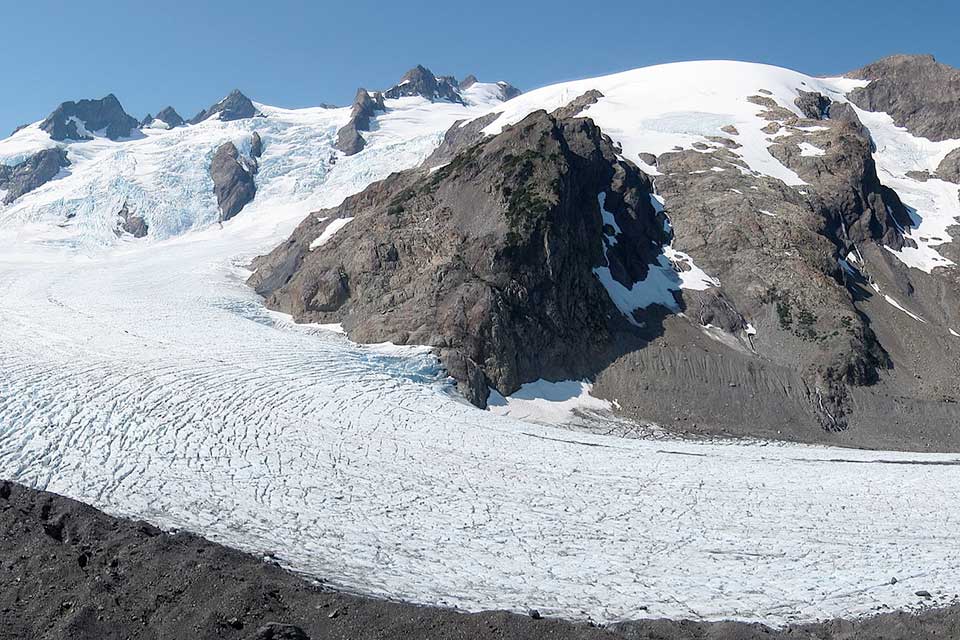 OLYMPIC NATIONAL PARK, Wash. (AP) — Portland State University professor Andrew Fountain has been researching the dwindling glaciers of the American West since the 1980s. He said for years, he studied their retreat dispassionately — as an interesting phenomenon to try to understand. Then last year, he had an epiphany.

“It dawned on me that, ‘wait a minute, in 20 or 30 years, everything that I’ve studied is useless because there are no glaciers,’” Fountain told KUOW.

The Olympic Peninsula has lost 45% of its glacier coverage since 1980, according to a new study by Fountain and coauthors from Washington state and British Columbia.

The peninsula’s remaining 250 glaciers, which covered about two square miles at last estimate, should be gone in another 50 years as humanity’s pollution continues to overheat the planet, the study found.

Fountain said glaciers worldwide are getting a kind of double whammy: Less snow in the winter and more melt in the summer. Beyond the fascination they provide for a small community of researchers, glaciers serve as frozen reservoirs.

“These glaciers provide water during the hottest, driest parts of the year,” Fountain said.

Salmon and people in glacier-fed watersheds rely on nature’s ice chests to keep rivers flowing and cool each summer.

Is it too late?

Fountain said a rapid end to fossil fuel burning could delay the glacial melt-off by a few decades.

“We have to encourage our lawmakers to start enacting legislation to cut greenhouse gases,” Fountain said. “I think, for the foreseeable future, the fate(s) of the glaciers on the Olympic Peninsula are sealed.”

Western Washington University glaciologist Douglas Clark, who was not involved in the new study in the Journal of Geophysical Research Earth Surface, called its findings “particularly stark.”

“That essentially all glaciers in an entire mountain range, the Olympics, will be gone by 2070 should disturb even the most ardent climate contrarian,” Clark said by email.

The glaciers of Olympic National Park sit at relatively low elevations, about 5,000 (1,524) to 6,000 feet (1,829 meters), and are shrinking faster than higher-elevation ice fields. Fountain called Olympic glaciers “the canary in the coal mine” for others in the western United States.

“It’s the same story as you go from mountain range to mountain range, how they’re responding,” said Mauri Pelto, a geologist at Nichols College in Dudley, Mass. Pelto has been studying the ice atop the North Cascades for nearly 40 years. “Lots of glaciers have already disappeared.”

Though scientists emphasize it is not too late to fend off catastrophic climate change, some amount of warming is already “baked in” to the atmosphere by the pollution already emitted.

“It may be too late for the Olympic glaciers, but perhaps not for those elsewhere in the Pacific Northwest, particularly on our taller (mostly volcanic) peaks,” Clark said.

Pelto estimated that three-fourths of glaciers in the North Cascades could not survive the current climate, let alone an even hotter one.

If the region sees more hot summers like it had in 2021, “there’s not going to be much left on Glacier Peak or Mount Baker, for sure,” Pelto said.

Pelto said glacier research is a mixture of discovery, joy, and sadness.

“Of course, your work is relevant and important, and that keeps you going and keeps you focused,” he said. “It’s what you have to do.”

Fountain said sometimes when thinking about the future of the icy realms he specializes in, he just shakes his head.

“Am I kind of wasting my time here? Maybe I should be doing something else,” he said. “But you’ve got to fight the good fight when you can. And that’s what I think a lot of the glaciologists are doing now.”