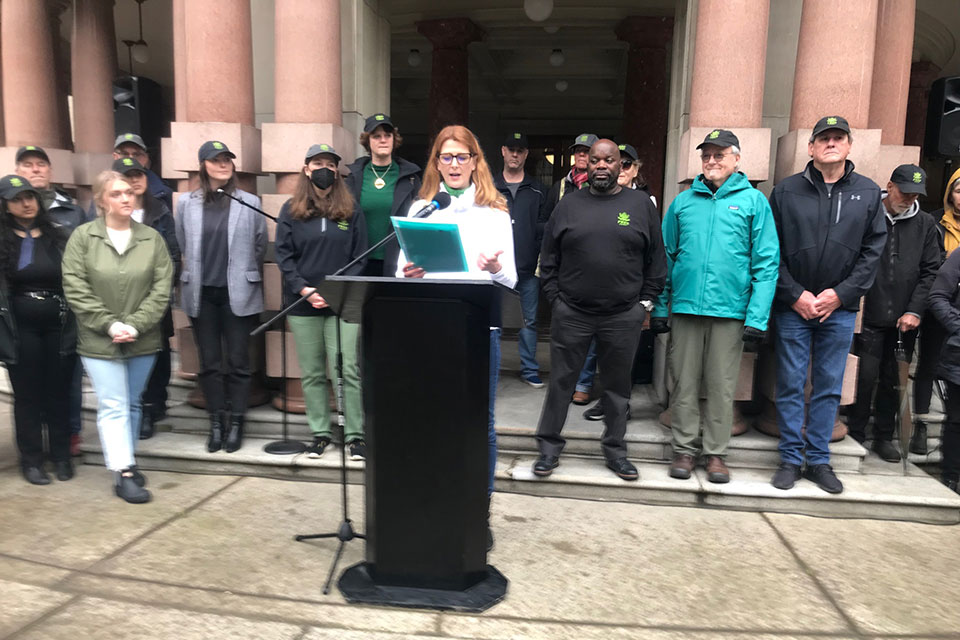 PORTLAND, Ore.—Friends of Frog Ferry held a news conference in front of Portland City Hall yesterday to announce that it will not “fold due to political powerplays” and will continue its plans to develop a passenger ferry system on the Willamette and Columbia rivers. The organization’s future was in doubt after City Council voted down a proposal for a spring budget amendment of $225 million on April 13, 2022, to fund ongoing operations and a transit-oriented development study along the Willamette River. The group issued the following press release:

“We believe in a better Portland,” said Frog Ferry Founder and President Susan Bladholm. “After the city council vote, we were overwhelmed with support and encouragement from the public.

"Our supporters asked us not to give up.

"This project is bigger than any one of us, and we must continue with our mission to provide an alternate, green mode of transit to our region.”

Frog Ferry has been negatively impacted due to a six-month delay in accessing the entirety of a $500,000 ODOT Statewide Transportation Improvement Fund (STIF) award granted in 2021. The award is being administered by TriMet in a separate contractual agreement, where TriMet is serving as a pass-through of ODOT’s funds. This is the second ODOT STIF grant that Frog Ferry has been awarded. The first grant in 2020 was paid in full by TriMet, without issue.

Frog Ferry has made several requests for mediation to TriMet leadership to resolve the dispute. The first request was made to TriMet leader, Sam Desue, in a memo sent on March 7, which went unanswered. The contract states that any dispute between Frog Ferry and TriMet that cannot be resolved should be entered into mediation.

In addition to requesting mediation with TriMet, Bladholm addressed comments made by Portland City Commissioner JoAnn Hardesty, who led the charge against funding for Frog Ferry. “We have repeatedly tried to address Commissioner Hardesty’s concerns and keep her informed throughout this effort, but she refuses to meet with us to find a path forward. This is not just about transportation, but the benefits a ferry system will bring to our community around livability, the environment and emergency response,” said Bladholm.

Frog Ferry announced that they have already contacted Portland City Commissioners Dan Ryan and Carmen Rubio to address any questions or concerns they have about Frog Ferry and the TriMet dispute so that they can return to city hall and secure their funding request. “We appreciate that the commissioners have expressed support for Frog Ferry and look forward to going back to city council and clarifying any outstanding questions or concerns. At the end of the day, we need the city to be an active, not a passive, supporter. There are millions of federal dollars out there to help us fund a ferry system for Portland. Together, with a champion in the city, we can bring those funds to our region,” said Bladholm.

For more information about the ferry project, including funding, route map and vessel renderings, visit www.frogferry.com.