Brian Stimson of The Skanner
Published: 28 May 2008 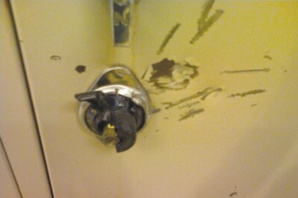 Two teenagers were arrested around midnight on Friday, May 23 during a break-in at Jefferson High School. According to Portland Public Schools spokesman Matt Shelby, the two suspects didn't steal anything but caused a considerable amount of damage, including smashing five computer monitors in the main office, 20 computer monitors in the library, pushing a soda machine downstairs, damaging lockers and several doors. It is unlikely the computers will be able to be replaced by the end of the school year.
According to Portland Police, the two teens arrested were 13-year-old Guillermo Perez of King School, and 14-year-old Joshua Erickson of Jefferson. Sgt. Brian Schmautz said the damage was "tens of thousands of dollars" but didn't have hard numbers. The two youths are being charged with two counts of Burglary in the second degree and Criminal Mischief in the first degree, both felonies.
They were apprehended nearly 30 minutes after they tripped the alarm by forcing their way into the building. It took 12 minutes for security to arrive and another 20 minutes for the police to set up a perimeter around the building – all the while the unaware students were smashing their way through the building.
Theft and vandalism are problems that students and teachers say has been ongoing at Jefferson. In the last 12 months, over $70,000 worth of equipment has been stolen from the school, a number that Shelby said is high when compared to other schools.
Some teachers say a rumor is circulating that a student might have a master key. Although security officials with the school district say they don't have enough evidence to back up the claim – they say they would likely see more alarms tripped at night — teachers say many items have gone missing when doors have been locked and no signs of breaking and entering were present. An entire mobile lab of Apple laptop computers – about 50 computers — was also stolen earlier in the year.
District spokesman Matt Shelby said they take allegations of a missing master key very seriously. The cost of re-keying a school the size of Jeff would probably cost almost as much as repairing the damage caused over the weekend – tens of thousands of dollars.