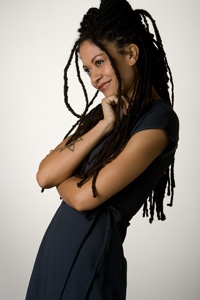 Renowned internationally for her provocative performance art and writings about race, damali ayo made a radical career change this month.
The author of "How to Rent a Negro," who was chronicled by The New York Times and National Public Radio as she traveled coast to coast panhandling for reparations for the trans-Atlantic slave trade, is now a clothing designer.
Her new fashion line, Crow Clothing, is available exclusively on her website, www.crow-clothing.com.
What made ayo decide to switch from social justice activism to designing clothes?
"It's been brewing in me for a long time, because I saw a fundamental – almost aching – part of work about social justice was that everybody was competing with each other," she said.
"And with Crow Clothing, I can actually deliver something concrete to people."
In fact, ayo has loved sewing and creating clothes since childhood; she's also a passionate gardener and yoga enthusiast.
A graduate of Brown University with a Master's of Fine Arts from Portland State, ayo (who chooses not to capitalize her name) started out as a visual artist incorporating issues of race and racism nearly a decade ago, soon branching out into performance art, including an Internet "television show" called Dose of Reality.
Her gallery shows have included Yarn, Playback, and The Flesh Tone Series, in which ayo visited local paint stores and commissioned the counter employees to mix cans of paint matching the varied flesh tones of her body. The Flesh Tone Series became two gallery shows and a radio documentary aired on stations in Portland and New York City.
Perhaps her most controversial performance art project has been Panhandling for Reparations, in which ayo and dozens of other performers stood on sidewalks in 21 states and three countries, collected change from White people, offered them a written receipt, and then gave the money to the next Black passerby – also offering them a receipt. The project was a media sensation covered by more than 50 radio stations, television stations and newspapers around the world.
Ayo's new venture seems uniquely timed to take advantage of current trends in online technology – it's a green business, advocating sustainable technology and offering social networking around healthy food and lifestyles.
Where did such a complicated idea come from?
"When I did the 'Rent a Negro' website in 1993, that's where I learned about the potential of the 'Net," she said. "So many people found me there – that's where my agent found me, was on the web.
"It was the Net that created my national and international presence."
Ayo said she's experienced a steep learning curve in the use of computer and Internet technology in her work, but she insists she's loved the challenge.
"My friend that set up my first website, he made me sit next to him and made me learn," she said. So when ayo decided to build her next website, she saw it as an art form in itself.
"The Net teaches you about the Net," she said. "And you need to hold your own. I'm learning to admit that I'm wrong, but some people take advantage of that – 'you don't know this, you don't know anything' – and I have to say, 'no, it's just this one thing I don't know.'"
When she created Crow as an online store rather than a storefront, some people thought it was less than an accomplishment.
"Our first order came from Canada, so rather than just having a storefront here, we have a storefront that reaches people anywhere in the world," ayo said. "I realized you could have such a broad, global reach."
She said the key to using technology as a tool in your everyday career is seeing it as just that – a tool, not an obstacle.
"I see a lot of people who just give up, and to me that's just cutting yourself off," ayo said. "Just because you don't know how to write code, you can still write email, blogs and network with people.
"And I think we have to remind ourselves that we all have the potential to connect with each other. It's a lot like a toaster," ayo said. "In fact, I interact a lot better with the web than my toaster – it's all relative."