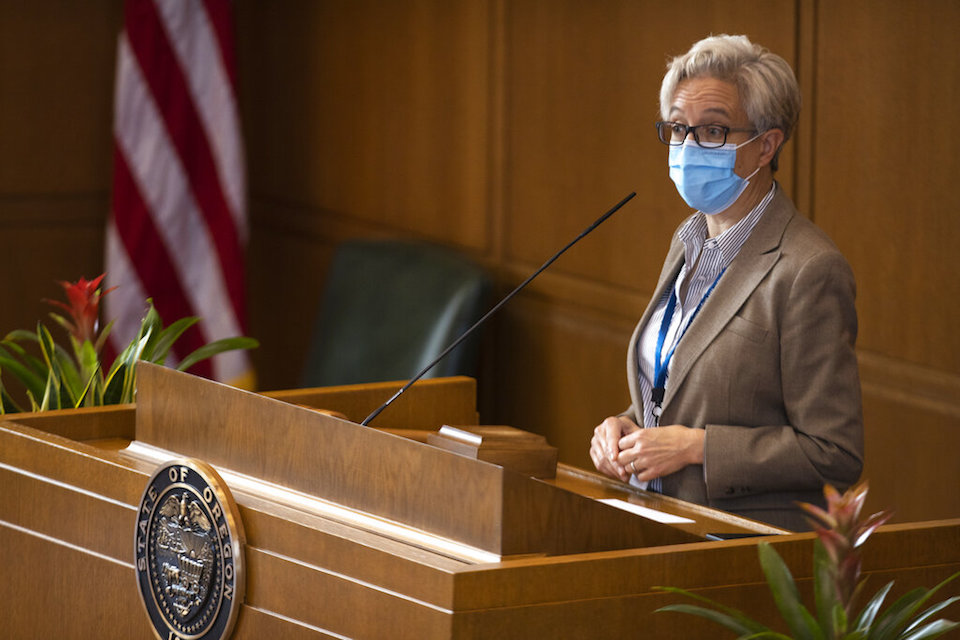 SALEM, Ore. (AP) —Republicans in the Oregon House failed to show up for a floor session on Saturday, thwarting majority Democrats’ attempts to pass new political maps before a looming deadline.

The absence of GOP lawmakers denied the House a quorum, meaning there weren't enough members present to formally begin work. As the day drew to a close, Democratic House Speaker Tina Kotek announced that the House would adjourn until 9 a.m. Monday. If enough Republicans haven't shown up by 9:30 a.m., Kotek said, the session will end.

The Legislature has until the end of the day on Monday to participate in the once-a-decade job of redrawing the state's congressional and legislative districts in accordance with new U.S. Census numbers. This year, the redistricting includes a new, sixth U.S. House seat for Oregon, which gained political clout in the latest census.

If they miss the deadline, the job of redrawing congressional maps will fall to a panel of five retired judges appointed by the Oregon Supreme Court, and Democratic Secretary of State Shemia Fagan will be tasked with redrawing the state's legislative districts.

But it's not yet clear if the new proposal will bring House Republicans back to the bargaining table. Republican lawmakers have been threatening to stay away to deny the Democratic-led House a quorum, the minimum number of legislators needed to do business.

Republicans are upset that Democratic House Speaker Tina Kotek rescinded a deal she made with them to split power in the redistricting process, even though Democrats have large majorities in the Senate and House.

The most substantial thing lawmakers are supposed to do before Sept. 27 is approve a new, sixth U.S. House seat for Oregon, which gained political clout following the latest census.

If lawmakers are unable to agree on new congressional maps by the deadline, the job would fall to a panel of five retired judges appointed by the Oregon Supreme Court.

Democrats don’t have large enough advantages to convene without a few Republicans present. Quorum rules say there must be two-thirds of lawmakers — or 40 representatives on the House floor — for votes to take place.

Oregon is one of the few states that require two-thirds of lawmakers to be present for any work to be done, instead of a simple majority.

Kotek delayed a Saturday morning floor session while both sides considered the new plan. She praised those who worked over the past 24 hours to come up with the proposal, which she said was fair and offered compromise.

No agreement after months of work

Under the Democrats’ earlier plan, the party would likely end up with five U.S. House seats to the GOP’s one. Democrats now have a 4-1 advantage among the state’s U.S. House members. The latest proposal would make the district now held by Democratic U.S. Rep. Kurt Schrader more likely to be a toss-up.

The redistricting deal that Kotek pulled out of was decided in April, during the legislative session. She said that in exchange for Republicans ending their delay tactics that blocked bills, she would evenly split the House Redistricting Committee — essentially granting veto power to the GOP.

Kotek said she decided to void the deal Monday because she was “disappointed that after many months of work, House Republicans did not engage constructively despite many attempts to address their concerns.”

Republicans have said Kotek abandoning the deal was a “shameful” exercise of political power.

In addition to the six congressional districts, lawmakers are also responsible for approving 90 legislative districts where voters pick state representatives and senators.

If the legislative maps are not passed by Monday, the task will fall to Secretary of State Shemia Fagan, a progressive Democrat who few Republicans would want to see in charge of the process.

Both parties have used walkouts — a tool made available by the Oregon Constitution — in the past, with Republicans relying on it in recent years. Most notably, in 2019 Republicans used it to stop a cap-and-trade bill, a strategy to reduce greenhouse gas emissions that contribute to climate change.