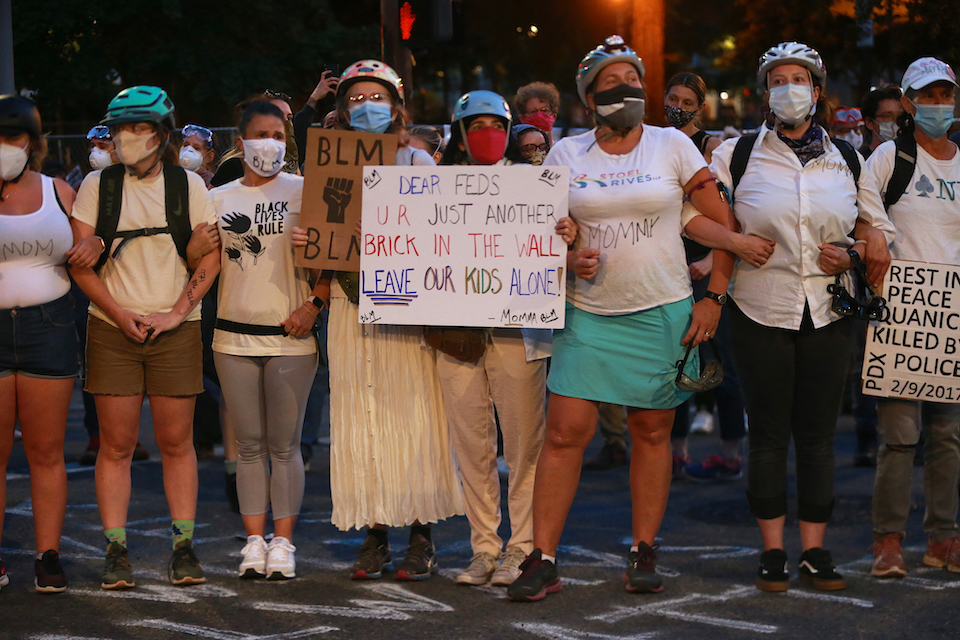 PORTLAND, Ore. (AP) — Protesters broke into a building, set it on fire and started dumpster fires late Saturday night in Oregon's largest city, police said, as demonstrations that have been taking place since the death of George Floyd intensified for another night in Portland.

The fire at the Portland Police Association building was put out a short time later, Portland police said on Twitter. The department declared the gathering a riot, and began working to clear the downtown area.

“As the crowd was dispersed, several people in the crowd were arrested and officers were able to extinguish the fire. Portland Police did not use any CS gas,” the bureau said in a statement early Sunday. Several arrests were made.

Tear gas was deployed, according to pictures and video from the scene, but it was not necessarily CS gas. Fencing that had been placed around the federal courthousehad also been removedtweeted.

Later, as police dispersed a group that had gathered near North Interstate Avenue, people threw rocks and paint-filled balloons at officers. Some were injured, the statement said.

Do you remember being told as a kid that the main difference between the USA & the USSR is that you could criticize the USA government without fear of being whisked away at night by a secret police force?

Those were good times. pic.twitter.com/P6uaXmnoFC

President Donald Trump has decried the demonstrations, and Homeland Security Secretary Chad Wolf blasted the protesters as “lawless anarchists” in a visit to the city on Thursday.

“We are trying to help Portland, not hurt it,” Trump tweeted Sunday. “Their leadership has, for months, lost control of the anarchists and agitators. They are missing in action. We must protect Federal property, AND OUR PEOPLE. These were not merely protesters, these are the real deal!”

Before the aggressive language and action from federal officials, the unrest had frustrated Mayor Ted Wheeler and other local authorities, who had said a small cadre of violent activists were drowning out the message of peaceful protesters in the city. But Wheeler said the federal presence in the city is now exacerbating a tense situation and he has told them to depart.

I appreciate the direct and forceful response by Senators Merkley and Wyden, and Representatives Bonamici and Blumenauer. https://t.co/CAuBac3JJn

“Keep your troops in your own buildings, or have them leave our city," Wheeler said Friday.

Oregon Attorney General Ellen Rosenblum late Friday sued Homeland Security and the Marshals Service in federal court. The complaint said unidentified federal agents have grabbed people off Portland’s streets “without warning or explanation, without a warrant, and without providing any way to determine who is directing this action.”

The administration has enlisted federal agents, including the U.S. Marshals Special Operations Group and an elite U.S. Customs and Border Protection team based on the U.S.-Mexico border, to protect federal property.

But Oregon Public Broadcasting reported this week that some agents had been driving around in unmarked vans and snatching protesters from streets not near federal property, without identifying themselves.

Pelosi and Blumenauer call out abuses of power

Tensions also escalated after an officer with the Marshals Service fired a less-lethal round at a protester’s head on July 11, critically injuring him.

“We live in a democracy, not a banana republic. We will not tolerate the use of Oregonians, Washingtonians — or any other Americans — as props in President Trump’s political games.

"The House is committed to moving swiftly to curb these egregious abuses of power immediately,” they said. 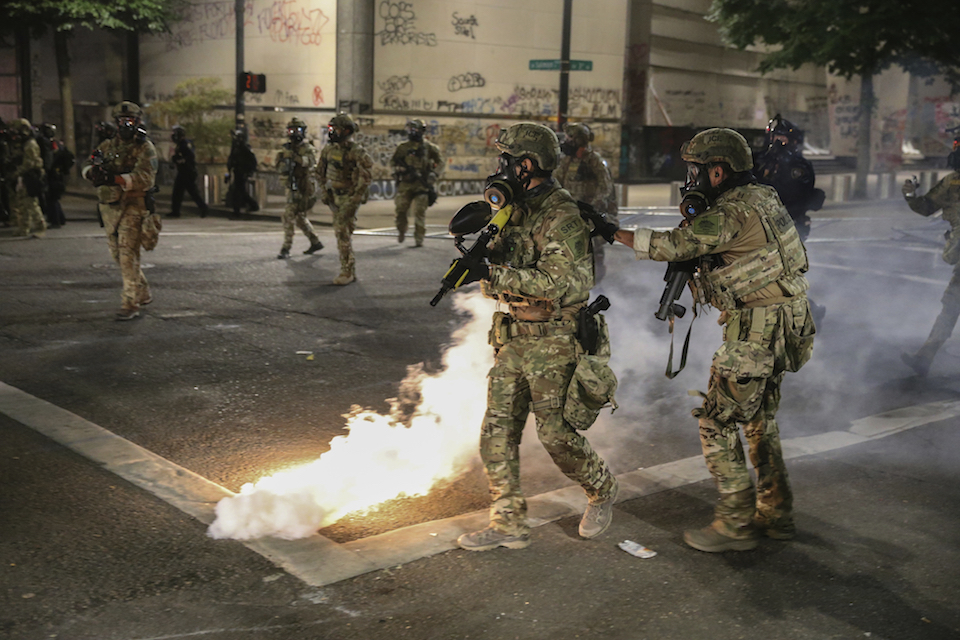 Police respond to protesters during a demonstration, Friday, July 17, 2020 in Portland, Ore. Militarized federal agents deployed by the president to Portland, fired tear gas against protesters again overnight as the city’s mayor demanded that the agents be removed and as the state’s attorney general vowed to seek a restraining order against them. (Dave Killen/The Oregonian via AP)

Hundreds of people had gathered Friday night for a vigil outside the downtown Justice Center, which is sandwiched between two federal buildings, including a courthouse, The Oregonian/OregonLive reported.

Across the street, dozens of other protesters entered two recently closed city parks after dismantling chain-link fencing that blocked access.

Federal agents emerged from an office building next door and used impact munitions, stun grenades and tear gas to clear the area, the news organization reported.

It said its journalists did not observe any incident that might have prompted the use of the weapons.

Early Saturday, Portland police declared the gathering unlawful, saying protesters had piled fencing in front of the exits to the federal courthouse and the Multnomah County Justice Center and then shot off fireworks at the Justice Center.

Federal officers and local police then advanced simultaneously on the demonstrators to clear the streets, making arrests as protesters threw bottles and pieces of metal fence at police, the Portland Police Bureau said. Portland Police Chief Chuck Lovell told reporters Friday that his officers are in contact with the federal agents, but that neither controls the others’ actions.

The overnight action by Portland's police was condemned by Jo Ann Hardesty, a prominent member of the City Council. Hardesty said Saturday that local police “joined in the aggressive clampdown of peaceful protest.”

Hardesty also slammed Wheeler, telling the mayor he needed to better control local law enforcement. Hardesty, who oversees the city's fire department and other first-responder agencies, said in an open letter to Wheeler if "you can’t control the police, give me the Portland Police Bureau.”

Mayor @tedwheeler, I've had enough. If you can't control the police, give me the Portland Police Bureau. Full Statement below. pic.twitter.com/Xq4dkV2Tdr

In a statement Saturday, Portland Police said as they responded to the overnight protests — which included people throwing projectiles at them — some federal agencies took action “under their own supervision and direction.” Portland Police said city officers arrested seven people, and one officer sustained a minor injury.