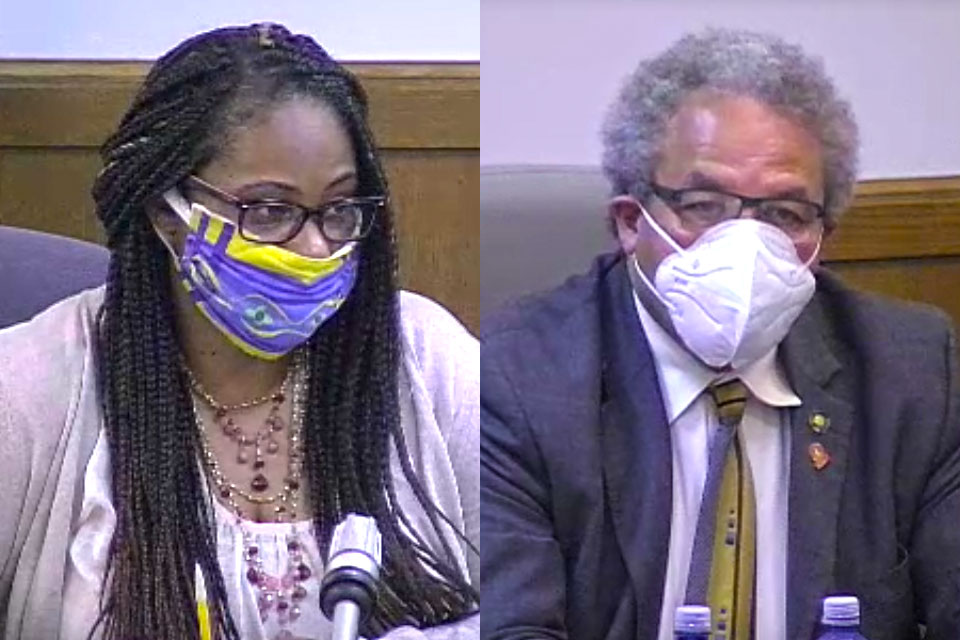 For the latter, six House bills and one Senate bill were passed on Friday.

“We’re talking about six activities -- six steps, I’ve been saying -- towards a much longer journey, in changing attitudes and philosophy and culture regarding police and public safety,” Rep. Lew Frederick (D-Portland) told The Skanner. “I like to put it this way: We’re trying to change things from being a law enforcement to being a peace officer situation.”

Some community leaders criticized the process as rushed and incomplete. Testimony submitted and signed by a group of organizations that included Unite Oregon, the Urban League of Portland, SEIU, the local Service Employees International Union, and East County Rising, Planned Parenthood Advocates of Oregon provided a detailed critique of each police reform bill.

“Many of the proposed bills represent police reform that falls short of honoring communities’ call to eliminate Oregon’s overreliance on police,” the testimony read. “Our communities are instead calling for alternatives that are not represented here, such as non-law enforcement first-response, restorative justice models, and investments in mental health and housing supports.”

Kayse Jama, executive director of Unite Oregon, told The Skanner that 400 years of oppression couldn’t be undone in a single special session.

“The community needs to be centered in this conversation,” Jama said.

“We have been demanding this kind of change for a long time, but in the meantime, we’re also committed to community engagement and community organizing. We have to engage the community that has been impacted for generations of police violence and over-policing in our community.”

“That’s correct, there wasn’t enough time,” Frederick told The Skanner. “But that doesn't mean that we will not be building into the (Joint Committee on Transparent Policing and Use of Force Reform) that’s been formed, a real structure so that we do have that ability for the community members and community groups to be part of the next set of discussions. We are not going to solve the problems in three days. The other side of that was, if we didn’t do anything and we waited and took too much time, people would say we were slowing it down.

"It was sort of a lose-lose situation.”

HB 4201 establishes the Joint Committee on Transparent Policing and Use of Force Reform.

“We heard when you said that HB 4201 needed additional work to ensure we do not unintentionally perpetuate further harm as we work to dismantle systemic racism,” Rep. Andrea Salinas (D-Lake Oswego) addressed Oregonians from the House floor. “We heard you when you asked for this work to include extensive and meaningful community engagement, and to center the lived experiences of Black people.”

Salinas explained the committee would examine police protocol, use-of-force policies, and the disparate impacts of such policies on communities of color, and would issue its recommendations by Dec. 31 of this year.

But the testimony from Unite Oregon and others insisted that such a group should have broader purview than what was outlined in the amended bill, arguing that the committee could ultimately allow the community to “hold a resources space for reimagin(ing) public safety.”

“There is much more work to be done in imagining what law enforcement means to our community,” Jama told The Skanner. “That’s the broader conversation Oregon needs to have.”

Frederick told The Skanner he hoped the next special session would give the Legislature the opportunity to reassess the role police officers are expected to play in the community.

“They're trying to be social workers and psychologists, and that’s not their expertise, that’s often not the reason many of them got into the profession,” Frederick said.

HB 4203 bans police use of choke holds and other methods of impeding a person’s ability to breathe, unless use of deadly physical force is warranted.

“Imagine this: At least 134 additional times in the past 10 years, ‘I can’t breathe’ went through the minds of people as they died from asphyxia in police custody,” Meek said. “This deadly use of force is disproportionately used against communities of color.”

Meek argued that while Oregon officers were allowed to use deadly force and weapons, the public was not trained in defense against such measures.

“Having the use of breathing restraints on the table leaves too many legal and lethal options that police officers can escalate to their use if their emotions get away from them,” Meek said.

While the testimony from Unite Oregon and others supported the bill, it warned that the “‘deadly physical force’ standard” would likely provide a loophole that would undermine the bill’s purpose, depending on how such a standard could legally be determined.

HB 4205 is designed to protect whistleblowers in law enforcement and requires any officer who observes misconduct to report the incident within 72 hours.

“That’s just part of a much broader set of issues that we need to look at in terms of both recruitment of people, how folks understand what they are allowed to do and why they are doing certain things, because I don’t think they really have that as an understanding statewide,” Frederick told The Skanner. “Part of that has to be, quite frankly, how do we look at a statewide discipline matrix? And who enforces that? Is that the Attorney General’s office, the DA’s association, is it the Police Chiefs’ or the Sheriffs’ associations? Who sets those guidelines?”

Unite Oregon and others argued the bill did not address the core problem that proper disciplinary action is inconsistently applied, and that the state should adopt stricter standards for when use of force is appropriate or prohibited.

HB 4207 establishes a public, statewide online database of police officers who have been suspended or had any certifications revoked, and requires every law enforcement agency to review personnel records before hiring police officers with previous experience in other jurisdictions.

But the testimony of Unite Oregon and others called the bill insufficient, arguing that it does not require the database to also include discipline imposed at the local level that did not rise to the level of suspension or revocation, “but still (met) a high degree of discipline.”

HB 4208 bans police use of tear gas and long-range acoustic devices in crowd control, unless a gathering has been categorized as a riot.

In their testimony, Unite Oregon and others supported the bill, but urged more specific language around what constitutes a riot, as well as clearer definitions of “tear gas” and “long-range acoustic devices.”

SB 1604 lays out an alternative for law enforcement agencies seeking to discipline officers, restricting use of binding arbitration.

In their testimony, Unite Oregon and others called the bill problematic, arguing that it gave too much power to police unions in the disciplinary process, and would allow “discipline for excessive use of force to be an issue that unions can negotiate away through collective bargaining.”

“I want to offer the opportunity for people who feel that maybe their hearts haven’t gotten there yet to acknowledge the pain that our communities have expressed,” Rep. Janelle Bynum (D-Clackamas) said during the Joint Committee on the First Special Session of 2020 last week. “And I just want to offer that grace to allow people to look at it for what it is: It’s not an indictment of you as a person, but I do expect people to recognize that there are multiple truths and those of us who serve here in the Legislature only want the best for all Oregonians. And just as I care when a saw mill or a paper mill shuts down in your town, I need you to care when one of our brothers or sisters is killed in the street. That’s all we ask.”

Frederick said the legislative momentum would continue on police reform bills, work he has been doing for the past decade.

“We are not letting up, and we are very vocal and we know how to get that point made,” Frederick told The Skanner. “This is not going to slow down, we’re not going to allow it to do that. I have had commitments from all of the leadership from Democrats and Republicans to continue this effort and really expand it.”