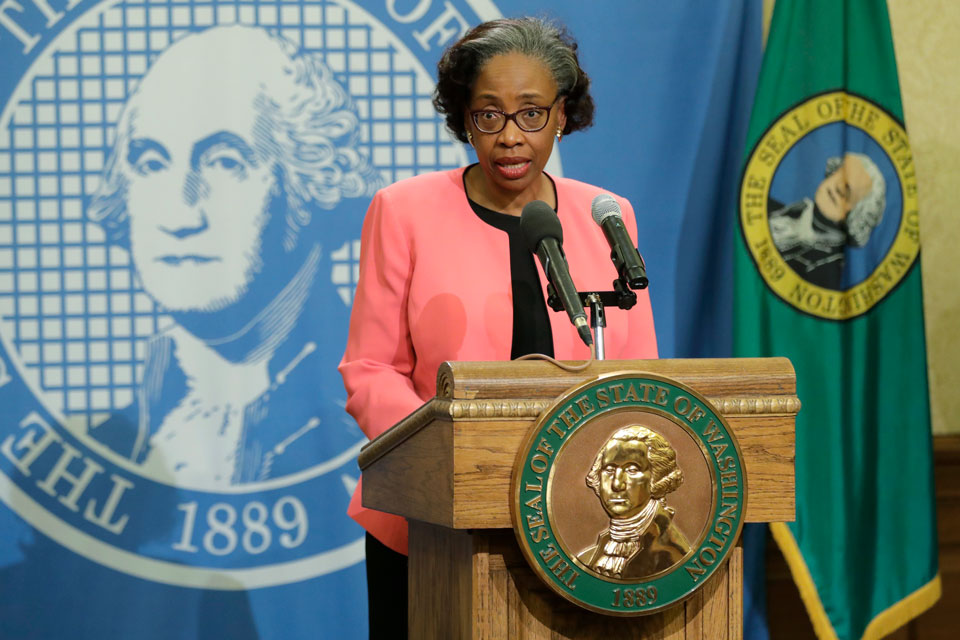 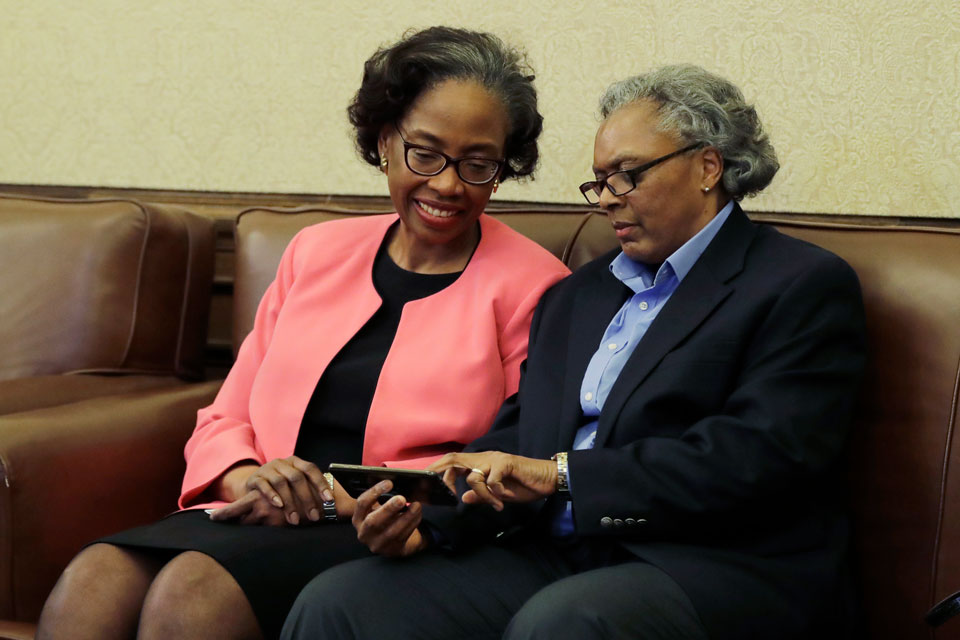 Pierce County Superior Court Judge G. Helen Whitener, left, looks at photos taken on the phone of her wife, Lynn Rainey, right, after Whitener spoke at a news conference, Monday, April 13, 2020, at the Capitol in Olympia, Wash. (AP Photo/Ted S. Warren)Whitener has served on the superior court since being appointed by Inslee in 2015, and previously served as a judge on the Board of Industrial Insurance Appeals. Before becoming a judge, she worked as both a prosecutor and defense attorney.

She replaces Justice Charles Wiggins, who retired from the court at the end of last month. She will have to run in the November general election to maintain the seat, and then again in 2022, when Wiggins’ term would have ended.

Whitener, 55, was born in Trinidad and moved to the U.S. to attend college, earning her bachelor’s degree from Baruch College in New York and her law degree from Seattle University School of Law.

“I think my background is so diverse and so varied that I represent just about every type of individual that could possibly come before the court,” said Whitener.

“As far as equity and inclusion, it does not matter where you are, or who you’re dealing with. What we are to be concerned about is the impact our actions have on others and that has always been my focus and I hope I can continue doing that.”

She’s the second recent appointment by Inslee. Justice Raquel Montoya-Lewis, who was sworn in Jan. 6, is the first Native American justice to serve on the state’s highest court.

“Judge Whitener inspires lawyers and non-lawyers alike with her relentless work to raise awareness for matters of race, justice and equity,” Inslee said in a written statement. “She is tireless in her commitment to building a justice system that works for all, and as a Supreme Court justice, she will have an even greater platform to promote justice for everyone in Washington state

Stephens said that while a public swearing-in ceremony will have to be delayed because of the ongoing COVID-19 outbreak, Whitmer will be informally sworn in as soon as possible so that she can begin her work on the court.

“Judge Whitener’s reputation for excellence precedes her and I know she will serve the people of Washington well in her new role as a justice,” Stephens said in a written statement.

“While many know her for her work in Pierce County, I can personally attest to her traveling statewide to inspire and mentor youth from underrepresented backgrounds into the legal profession,” Washington State Bar President Rajeev Majumdar said in a written statement.

“Now the entire state will benefit from her human-centered and dignified pursuit of justice.”