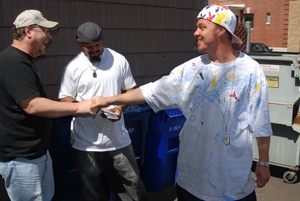 Dan Shea, a muralist and veteran with Vets for Peace chapter 72, shakes hands with a volunteer named Bucket at the 2007 People of Color Against the War workshop. Mic Crenshaw, an MC and founder of Global Fam stands in the background.

Mireaya Medina has noticed a shift in the way the Iraq War is treated in the media. Suddenly, now that election season is in full swing, coverage has tilted to the weak state of the U.S. economy. That's a problem, Medina says, because the way she sees it, the reason why our economy is in such bad shape is because we are at war.
"Somehow we're still forgetting we are in an occupation," she said.
Medina is helping to organize the second annual "People of Color Against the War: Iraq Winter Teach-In." The event aims to expose the true costs of war. Iraq seems to be half a world away, organizers point out, yet billions of dollars are being shipped there to finance a conflict that a majority of Americans now oppose.
Guest speakers and workshop facilitators will include, Zahra Sultan, a former Iraqi translator, refugee and founder of saverefugees.org; the Rev. Dr. Leroy Haynes, senior pastor of Allen Temple C.M.E.; Kayse Jama of Center for Intercultural Organizing; and Joshua Arogon, aka Rocket One of 45th Parallel Universal Zulu Nation.
Rev. Haynes, who has a long history in the civil rights movement, said the Iraq War and the policy blunders that have come along with it have undermined the United States' moral standing in the world.
"They're promoting a political policy of torture, and we're supposed to be the leading standard throughout the world," he said. "We no longer have that moral drum major stand."
While Medina doesn't pretend to have the solution to ending the war, she hopes meeting and learning from one another will help change perspectives and expand the peace movement into communities of color.
"We can't forget that people in Iraq are people of color," she said.
Hearing Sultan talk about the human cost of war will really bring the consequences home for many people of color, Medina said. Her experiences illustrate the toll our invasion has taken on Iraq's civilian population.
"When she talks about a baby getting his arms blown off, you listen," Medina said. "It's a lot more important than someone shooting steroids."
Chief workshop sponsor Oregon Action said Oregon taxpayers will contribute $1.3 billion to the war in 2008. That money could pay for 185,570 Head Start slots for children, or health care for 374,114, their fact sheet points out.
Rev. Haynes said he is proud of the anti-war peace movement, and says the momentum must continue to bring the troops home.
"We can't fight a war like this and continue to deal with important issues like poverty, infrastructure, poverty and health care," he said
People of color who attend the teach-in will learn how to build a successful campaign against government policy, the human cost of war and the economic costs associated with military occupation. Videographer Joe Anybody will show his video about the crisis in veteran's health care on demand.
The anti-war movement on a larger scale is mostly White, Medina said. She hopes that by providing people of color with a safe place to come together and share their perspective, the teach-in will be part of changing this. The costs of war are affecting people of color disproportionately – in money that could be going for programs of social uplift instead of the machinery of war, she said. "People of color are suffering from this."

The second annual "People of Color Against the War: Iraq Winter Teach-In." will begin at 11 a.m. on Saturday, Feb. 23 at Liberty Hall in the Worker Education Resource Center, 311 N. Ivy St. Everyone is welcome.