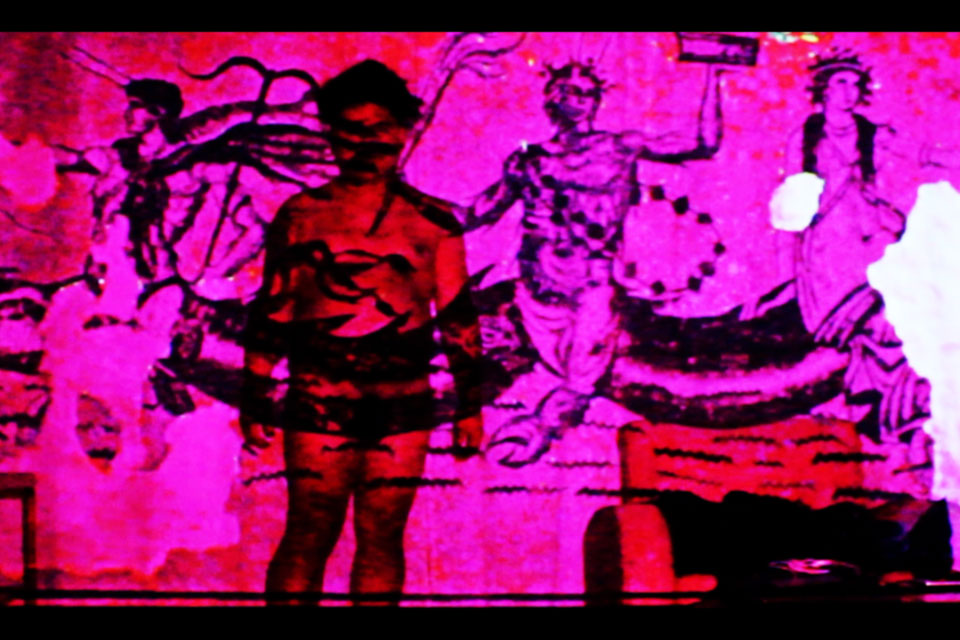 In the coming month, the Portland Art Museum is highlighting Black artists from a number of disciplines through exhibits and thoughtful discussions of their work. A series of artist talks will give the public access to the artists themselves as they discuss not only their own disciplines, but other exhibits currently on display at the museum.

On Jan. 16, performance and video artist maximiliano will lead a talk about their unique blend of science fiction imagery, industrial backdrops and religious iconography, which they use to explore Black identity.

“The present is dystopian enough,” maximiliano told The Skanner.

“But (I’m) definitely always thinking about what exists beyond our regular sight. Maybe thinking of futures that are kinder, kinder to Black people.” 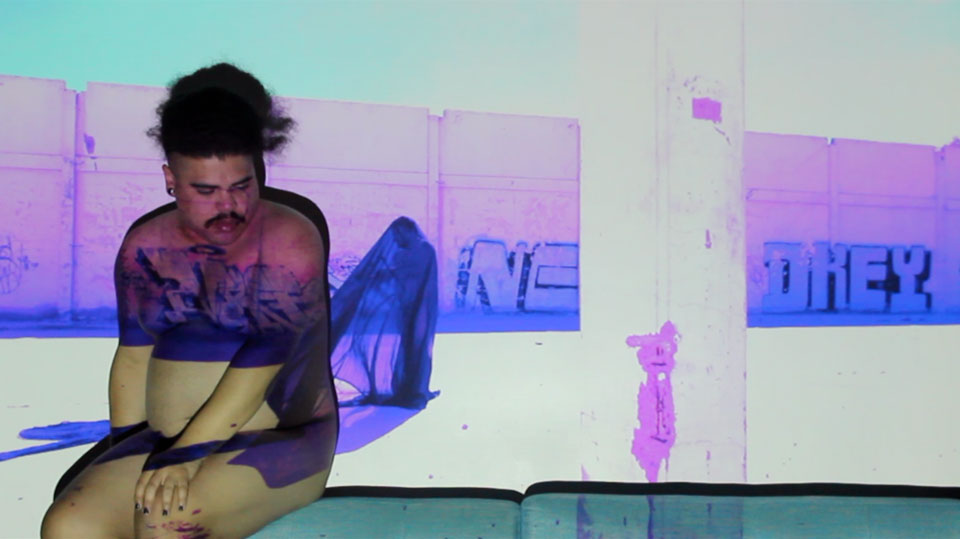 Performance and video artist maximiliano will deliver an artist talk at Portland Art Museum on Jan. 16. (courtesy maximiliano)“Softness” is a running theme through maximiliano’s work, which includes photos of the artist in and around a loading dock covered in a dark opaque veil that is by turns reminiscent of a funeral shroud or cocoon. In some images maximiliano appears to be mourning; in others, defeated, being baptized, or being born. maximiliano appears in some shots as something discarded next to garbage bins, hiding from the elements or other, more human dangers; in others, the artist has an ominous, almost supernatural presence.

“I grew up in the Catholic church, so a lot of my vibes come from that ritual and ceremony, placing my work as a Roman Catholic refusal, as empty and void, as ghostly, to be filled with my own reality, and shared realities of others,” maximiliano told The Skanner.

But maximiliano shows the takeaway is “soft futures,” with “softness as a key ingredient of resistance, of essential survival.”

Fittingly, maximiliano, who uses they/them pronouns, often uses their body as both medium and canvas.

“The body is powerful,” maximiliano told The Skanner.

“The Black body is powerful.

"What are we but an unbroken line going back, of shared flesh, of the sweat, and blood of individual and communal existence and understanding? As an artist thinking about making art with my reality—with what is around me, with what I have access to, thinking of materials, and materiality—what seems more of zero point than my own body?”

By veering into more fantastical elements, maximiliano finds ways to explore concepts of resistance. Take, for example, another motif in their work: “maroon space societies.”

“Successful Black and indigenous resistance during colonialism of the new world is a very undertold story and there are and were plenty of maroon societies that maintained independence for centuries,” maximiliano told The Skanner.

Playing with a more futuristic setting allows maximiliano to explore such “respites from whiteness, and the violence of that.” These settings are “hidden sites of Black and brown healing,” maximiliano added.

Such visualizations have real-world benefit, maximiliano said: “The more a thing is explored, is imagined, the more it’s actualized and exists in this world as we understand it.”

The following events will be hosted at the Portland Art Museum: 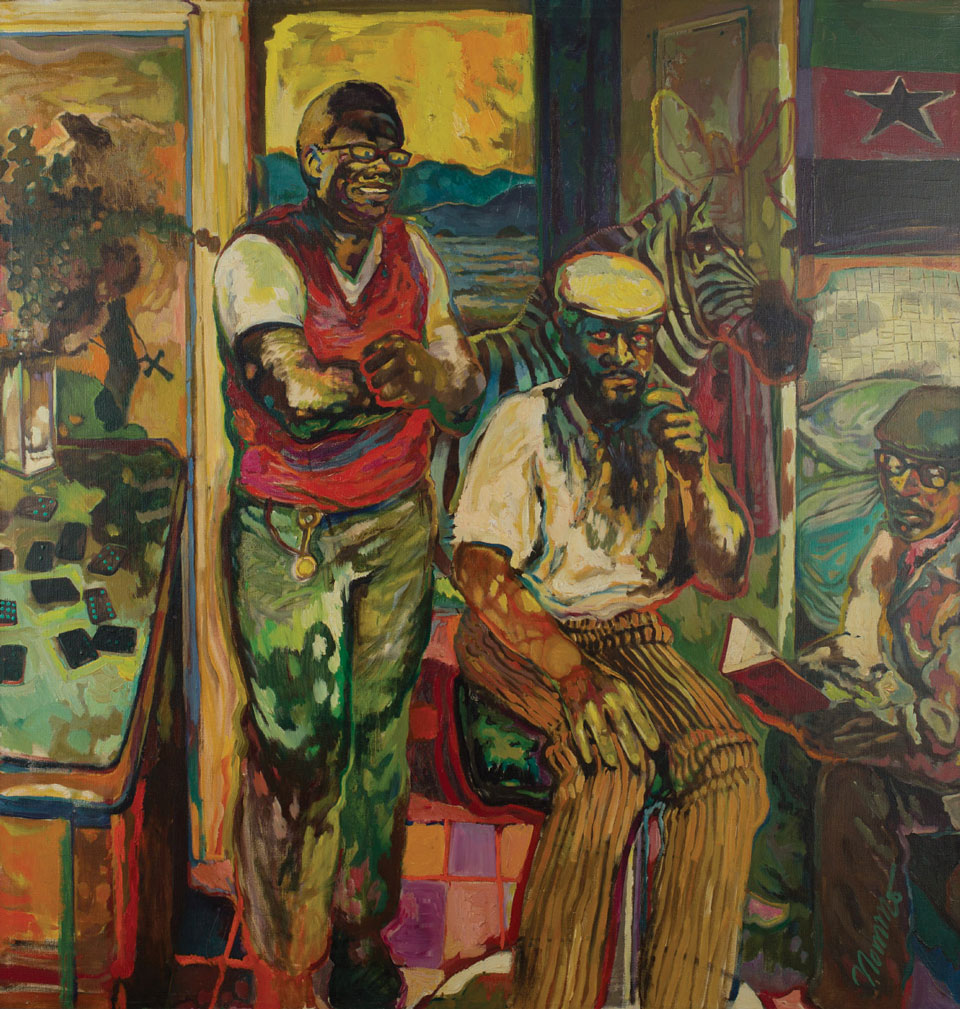 Isaka Shamsud-Din is a Portland-based painter whose Rock of Ages exhibit can be seen at the Portland Art Museum through Aug. 2021. He will deliver an artist talk at the museum on Jan. 8. (courtesy Portland Art Museum)Longtime Portland artist Isaka Shamsud-Din will deliver a 45-minute talk in the galleries, presented in conjunction with his exhibition Rock of Ages. Shamsud-Din is a masterful painter who blends folklore and personal narrative in his warm, intimate work. His scenes often illustrate old Portland landmarks significant to the Black community, some of them long since shuttered, while introducing elements that evoke African roots: the Pyramids of Giza, a zebra peeking over a shoulder.

For his artistic work and his accomplishments as a social justice leader, Shamsud-Din was recognized with Isaka Shamsud-Din Day at the 2019 Juneteenth celebration at Portland’s City Hall. His current exhibit is supported by the Regional Arts and Culture Council and Teressa Raiford of Don’t Shoot Portland, and will also showcase the many iconic murals Shamsud-Din has painted in the city throughout the past half-century.

Space is limited and advance tickets are recommended.

Activist, writer and art curator Kimberly Drew will lead a dynamic discussion about the role photography plays in artist Hank Willis Thomas’ work, specifically his current All Things Being Equal… exhibit at the Portland Art Museum.

Drew combines her background in art history and African-American Studies, as well as her work managing social media for the Metropolitan Museum of Art, to reflect on the medium of photography and its potential in new and expanding media. Drew was previously an intern with The Studio Museum in Harlem. Her writing has appeared in Vogue, Glamour, W, and Teen Vogue.

Police Violence, White Supremacy, and How it Affects Your Brain

From Portland Art Museum: Throughout his career, Hank Willis Thomas (American, born 1976) has addressed the visual systems that perpetuate inequality and bias in bold, skillfully crafted works. Through photographs, sculpture, video collaborative public art projects, he invites us to consider the role of popular culture in instituting discrimination, and how art can raise critical awareness in the ongoing struggle for social justice and civil rights.

The many works included in All Things Being Equal… demonstrate Thomas’s inventive exploration of photography, advertising and modern art and their many sociocultural ramifications. The exhibition groups art works thematically to illuminate subjects that Thomas has treated with sensitive nuance throughout his career, including the human toll of gun violence, the impact of corporate branding and the commodification of individuals, and the ways advertising plays to myths and stereotypes of race. The exhibition also highlights Thomas’s investigation of archival images from many sources and how he has applied strategies of appropriating and reframing texts, images and materials to connect historical moments of resistance and protest to our lives today as a call to continue moving toward greater social justice.

Also: Portland artist Jeremy Okai Davis will be on Oregon Art Beat on Jan. 9 to discuss his vivid acrylic portraits, many of which highlight luminaries from popular American music and pop culture.

The following exhibit will be hosted at the Jordan Schnitzer Museum of Art:

Portland artist Carrie Mae Weems will be awarded an honorary doctorate from the University of Oregon later this year in honor of her work in both visual arts and a wider conversation about race and justice. Here, in an exhibition organized by the Louisiana State University Museum of Art, she uses video, installation and photography to ask "How do you measure a life?" as she considers modern society and Black identity.

From Jordan Schnitzer Museum of Art: "In this body of work, created between 2014 and 2018, Weems addresses the constructed nature of racial identity--specifically, representations that associate Black bodies with criminality and the resultant killings of Black men, women, and children without consequence. Through a formal language of blurred images, color blocks, stated facts, and meditative narration, she questions this sustained history of violence and judicial inaction."