By Nancy Mccarthy of The Skanner
Published: 08 February 2006 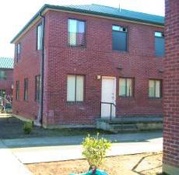 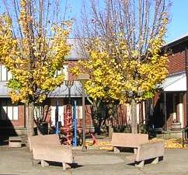 Fresh from an apparently successful run at New Columbia, the Housing Authority of Portland is embarking on a new redevelopment project.

The 60-year-old, 101-unit public housing complex formerly known as "Iris Court," and now called "Humboldt Gardens," will undergo a transformation from one-and two-bedroom low-income apartments in four buildings to a modern development containing 129 units for single parents with children, families and the disabled with very low to moderate incomes. A Head Start center and police contact and management offices also may be located on the site.

Another 21 homes away from the site will be developed for sale to residents at or below 80 percent of the area's family median income.

The projected $40 million project is being partially financed by a $16.9 million federal HOPE VI grant, the same type of grant that paid for much of the redevelopment of Columbia Villa — renamed "New Columbia" — on 82 acres in the Portsmouth neighborhood of North Portland.

Located on five acres between North Commercial and Vancouver avenues north of the state Department of Human Services office, Humboldt Gardens is a small garden court complex built in the 1940s, noted Steve Rudman, executive director of the housing authority.

The housing authority has wanted to redevelop the complex for many years, but didn't find the opportunity until now, Rudman said. At one time it had an even higher priority than Columbia Villa, but the Columbia Villa project was a "better fit" for the HOPE VI grant that the housing authority received nearly six years ago.
"The history in the past 20 years is that it has had problems both physically and
socially," Rudman said. "The road behind it was closed off for community safety reasons, but now there are a lot of places to hide or to be out of eyesight in the neighborhood. There have been issues of crime and drugs."

Following several public hearings and design workshops, the committee will recommend a site plan to the board. Committee members also will keep tabs on the economic partnerships that could be formed between the housing authority and community businesses during the construction, and they will help to market the homes for sale to minority and low-income households.

Design workshops are planned from March through July. The first workshop will be on March 4; the time and place is to be announced later. Residents will begin moving out of the court in June, and the relocation should go through November. Demolition will go on from next February through May, and construction is planned from July 2007 through December 2008. Residents may begin moving back to Humboldt Gardens in December 2008.

Builders should receive a request for proposals at the end of this month. A selection committee will evaluate the contractors for construction ability, experience and safety. Participation of smaller and minority-owned businesses also is being encouraged in the request for proposals.

The site is a challenge, said Mike Andrews, director of community revitalization for the Humboldt Gardens project. Because the buildings face each other and away from the street, they feel "disconnected" from the neighborhood, Andrews said. There are hidden "pockets" on the site that raise safety issues.

In an effort to open it up and spread the development out, the housing authority is negotiating with the state for land being used as a parking lot on the corner of North Alberta Street and Vancouver Avenue. The lot is operated by the state Department of Human Services.

Andrews hopes the development's new design will include 129 rental units, with some three-bedroom apartments included in the mix of one- and two-bedroom units.

ManyofHumboldt Garden's residents are single parentswithchildren, Rudman noted, and none of the apartments are accessible for the disabled. The new development should attract more families to the new apartments, including those with handicaps, Rudman said.

Within a one-mile radius of the Humboldt Gardens site, the housing authority will offer 21 homes for sale on scattered lots to lower-income residents. These will either be remodeled existing homes that are being used for public housing, or they may be new homes built two to a lot where only one house once stood.

Current residents in the development will be relocated to other public housing units beginning June 1. They will be asked which part of town they want to move to, and the housing authority will try to place them in that location, Rudman said. About 40 percent of the Columbia Villa residents who had to be relocated during construction were able to stay in North and Northeast Portland, he noted.

In addition to the $16.9 million HOPE VI grant, the project will receive financial help from the city of Portland, which is contributing $1.5 million; the sale of low-income tax credits to investors for $13 million; and $2 million in tax-exempt bonds from the Oregon state Treasurer's office. The housing authority also is allocating $2.5 million from its budget and receiving $2 million in federal low-income tax credits.

Rudman said the new HOPE VI grant was one of only seven the federal government distributed this year. Unlike many cities that received the earlier HOPE VI grants to revitalize public housing projects, Portland brought the $153 million New Columbia project in under budget and ahead of schedule, Rudman said. Residents began moving back last May, two months earlier than originally planned. The 852-unit project should be completed by December.

When asked what lessons the housing authority learned from New Columbia that it might apply to Humboldt Gardens, public affairs director Shelley Marchesi went back to the name. "Don't name it 'new,' " she said.

"New Columbia" was something that people just started calling the Columbia Villa project, and critics continued to ask where it came from.

"There was no process we could point to for selecting it," said Marchesi, who added that Iris Court residents, instead, were asked to offer suggestions for renaming their development. "That's something we definitely learned to do," she added.