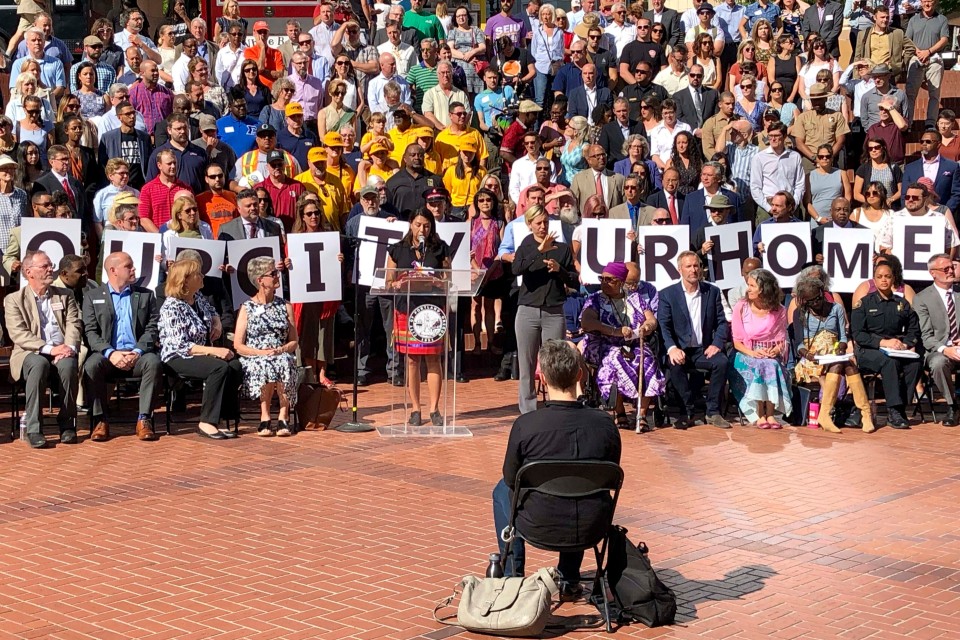 PORTLAND, Ore. (AP) — The mayor of Portland, Oregon, said Wednesday that people planning violence or espousing hatred at a weekend protest by right-wing groups in the liberal city "are not welcome here."

Mayor Ted Wheeler spoke at a rally with other leaders ahead of the event Saturday, which is also expected to bring out anti-fascist protesters. Anticipating trouble, none of the city's nearly 1,000 police officers will have the day off.

The weekend event is being organized by a member of the Proud Boys, which has been designated as a hate group by the Southern Poverty Law Center.

Wheeler decried any groups "who plan on using Portland on August 17th as a platform to spread your hate." Other participants stood behind him holding letters on large posters that spelled out, "Our city, Our home."

Also expected at the Saturday event are members of the American Guard, Three Percenters, Oathkeepers and Daily Stormers.

American Guard is a white nationalist group, according to the Southern Poverty Law Center, while Three Percenters and Oathkeepers are extremist, anti-government militias. The Daily Stormers are neo-Nazis, according to the center.

Wheeler said Wednesday that Portland has a history of supporting free speech and the right to assemble.

However, Wheeler said groups have recently used the "guise of free speech" to be violent.

"Violence is not a civil right," the mayor said.

The speakers were heckled by about a half-dozen protesters who shouted that anti-fascists were to blame for past violence, not right-wing visitors.

"I don't want to stop anyone's free speech. Everyone should always express their free speech, right or left," said Haley Adams, a member of a group Portland Liberation.

The group says it is aligned with the right-wing organization Patriot Prayer in Washington state and has camped out at Wheeler's house to protest his handling of past demonstrations and the attack on Ngo, the conservative blogger.

Some businesses are closing their doors Saturday and several weekend events have been canceled.

The Heaven to Earth Festival, a religious music event with a 10-year history in Portland, is in limbo after subcontractors said they would not set up tents in downtown due to potential unrest.

The Block, with a 21-year history in Portland, will close one of its food carts closest to the rally, owner Chris Schenk said.

"You know, I always fear the broken glass and looting and all the stuff that could go on," Schenk said as he busily filled sandwich orders.

"I would like to say it myself: Stay away, we don't want you here."

A 5K race was forced to move its course and an Irish bar that's a Portland institution canceled an annual amateur boxing match that draws 500 spectators.