ACLU of Oregon to Sue ICE 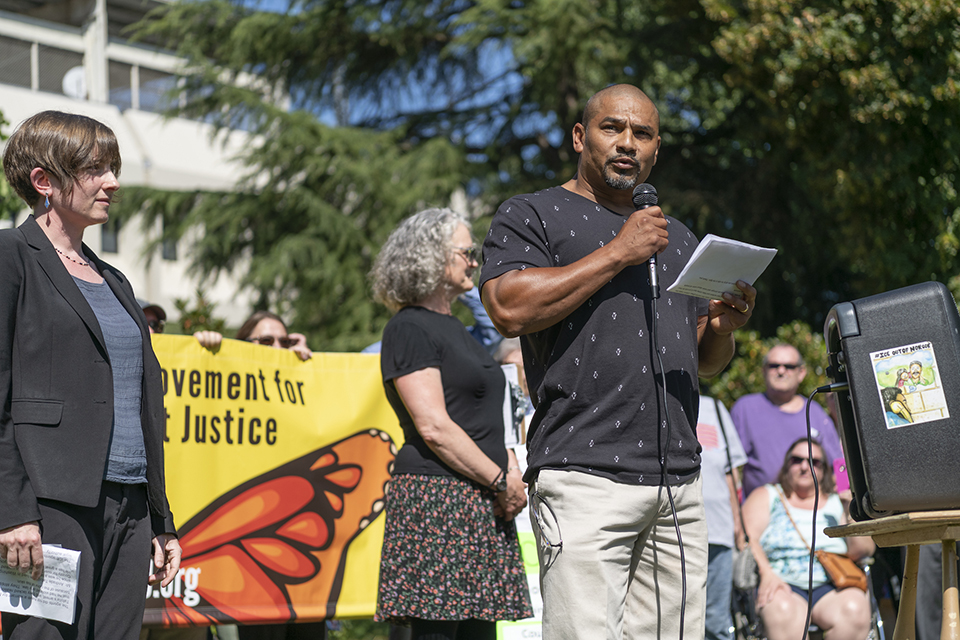 On Monday the ACLU of Oregon announced that it has filed a tort claim against Immigration Customs and Enforcement on behalf of a US citizen who was illegally detained in Washington county in 2017.

According to the claim, in September 2017 ICE agents followed Isidro Andrade Tafolla and his wife, Renee Selden Andrade, into a Washington County courthouse for a court appearance related to a DUI, and continued to follow them as they exited the courthouse. They confronted the couple with a  mugshot portraying somebody else, saying, “This picture right here? That’s you.” The photo, according to the couple and the ACLU, portrayed a different individual. Officers also refused to identify themselves when pressed by the couple and by legal observers who were on scene protesting.

“Two years ago, I asked for an apology from ICE, and they said they didn’t do anything wrong,” Andrade-Tafolla said at a Monday-morning rally outside the courthouse. “Today, I get to fight back through the legal system.

"These federal agents must be held accountable.”

The couple is seeking damages of $100,000 for “humiliation, emotional distress, and psychological harm” as a result of being approached without reasonable suspicion or probable cause.

In December 2018 a coalition that included Innovation Law Lab, Adelante Mujeres, the Interfaith Movement for Immigrant Justice (IMIrJ), Northwest Workers’ Justice, formally petitioned Oregon Supreme Court Chief Justice Martha Walters to issue an emergency rule prohibiting ICE arrests at or near state courthouses. Walters asked to meet with ICE officials regarding courthouse enforcement in June but has not issued a rule, which would be similar to one issued by courts in New York and which a federal judge in Massachusetts has issued an injunction to oppose.

“Because of incidents like this, which are happening day in and day out, people are afraid,” said Nadia Dahab, attorney at Stoll Berne who helped draft the letter on behalf of Innovation Law Lab. “We’ve asked Chief Justice Walters to issue a rule that would make clear that our state courthouses are safe places for all Oregonians.”

In October 2017 Washington County Sheriff Pat Garret criticized the agents’ tactics, saying they violated agreed upon protocols by not identifying themselves and by driving unmarked cars not obviously associated with law enforcement.

There’s evidence that what happened to the Selden Andrades in 2017 was not an isolated incident. According to the ACLU of Oregon, documents and video taken by legal observers show ICE has engaged in enforcement activities throughout the state, in urban and rural counties. In a news release the organization listed Multnomah, Clackamas, Lane and Marion counties as well as rural counties like Wheeler, Umatilla and Josephine as sites where ICE agents have appeared to question or detain individuals they suspect of being in the United States illegally.

“If a law enforcement stop, absent clear identification, leads to a 911 call, arriving officers could easily become just as confused as the person stopped,” Garret said in 2017. “That confusion about who is who, with unidentified ICE agents, could literally become deadly.”

The ACLU classifies the Selden Andrade incident as a false arrest and is suing on those grounds. At the federal level, Rep. Suzanne Bonamici (D-Oregon) introduced the Protecting Sensitive Locations Act to codify Department of Homeland Security policy on ICE activity at sensitive locations and expand it to include courthouses, health care facilities, schools and places of worship. It would also require DHS to provide training to ICE officers.