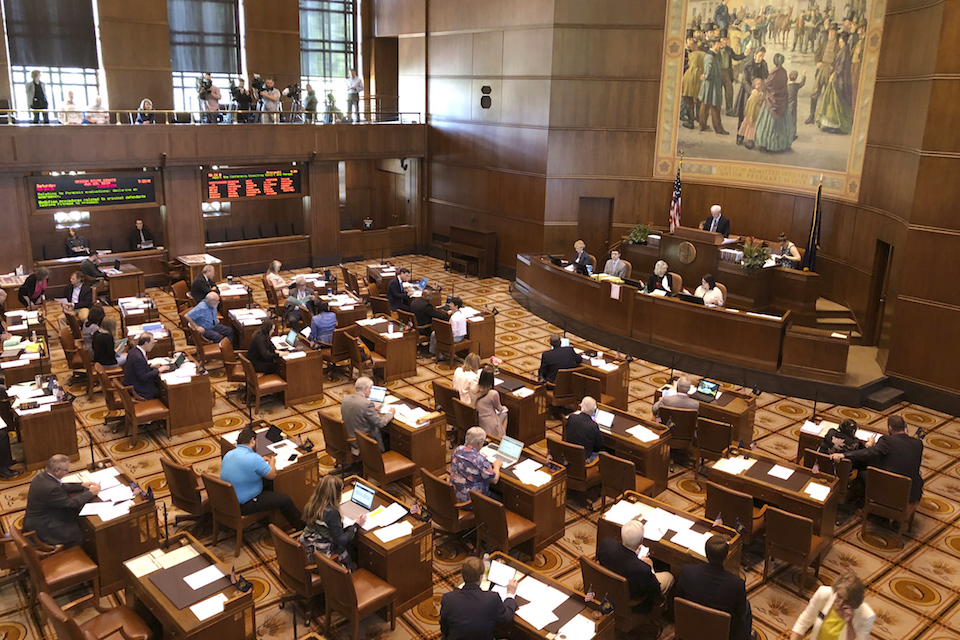 SALEM, Ore. (AP) — Republican lawmakers returned to the Oregon Senate on Saturday, ending an acrimonious nine-day walkout over a carbon emissions bill that would have been the second such legislation in the nation.

The boycott had escalated when the Democratic governor ordered the state police to find and return the rogue Republicans to the Senate so the chamber could convene, and a counter-threat by one GOP senator to violently resist any such attempt. Senate Republicans fled the state to avoid being forcibly returned by the Oregon State Police, whose jurisdiction ends at the state line.

Democrats have an 18 to 12 majority in the Senate but need at least 20 members — and therefore at least two Republicans — present to vote on legislation.

Nine minority Republicans returned to the Senate on Saturday after Senate President Peter Courtney said the majority Democrats lacked the necessary 16 votes to pass the legislation, a statewide cap on carbon that allows companies to trade pollution credits. Shortly after convening, senators quickly voted 17-10 to send the climate proposal back to committee, essentially killing it for the session.

Sen. Sara Gelser, a Democrat from the college town of Corvallis, said the demise of the cap-and-trade bill has deeply upset many constituents.

"That's a bill that's been many, many years in the making. Thousands of people have weighed in on it through email, over a thousand people came to visit the Capitol during the session alone ... so people were really invested in that," Gelser told reporters Saturday.

"I think there's a lot of heartbreak, but today is one day and we'll come back and address it. We have to. Our planet demands it."

The House had previously passed the bill, one of the centerpieces of Oregon's 2019 legislative session, which is scheduled to end late Sunday.

One of the Republicans absent Saturday was Sen. Brian Boquist, who had told state police to come heavily armed and to send bachelor officers if they were going to forcibly return him to the Senate during the walkout. Senate Republican leader Herman Baertschiger, Jr., on Friday refused to condemn Boquist's words, only saying the comments were unhelpful.

The walkout by the Republicans, which began June 20, inspired protests at the Capitol by their backers and led to the building being closed one day due to security threats.

But it had zero impact on the climate change bill, Gelser said.

"It was my understanding before they left the building that we did not have 16 votes for that bill," Gelser said. "It did not fail because of a walkout."

The Republicans, though, painted their boycott as a triumph.

"Our mission in walking out was to kill cap and trade," Senate Minority Leader Herman Baertschiger told reporters Friday. "And that's what we did."

Democrats had said the climate legislation was critical to make Oregon a leader in the fight against climate change and will ultimately create jobs and transform the economy.

The bill, if passed, would have been the second in the nation, after California, to cap and trade pollution credits among companies. It aimed to dramatically reduce greenhouse gases by 2050 by capping carbon emissions and requiring businesses to buy or trade for an ever-dwindling pool of pollution "allowances."

With only two days before the 2019 legislative session officially ends, the Senate hurried through some of the more than 100 bills and motions that were still pending. Among the measures are ones on paid family and medical leave, campaign funding, and funding for the Oregon Food Bank and for Medicaid. Other big-ticket items are a bill aimed at addressing sexual harassment in the Capitol, money to expand affordable housing and an increased tobacco tax.

The Republicans wielded power disproportionate to their numbers this session. They walked out of the Senate last month to block a school funding tax package. They returned only after Gov. Kate Brown brokered a deal in which Democrats dropped legislation on gun control and children's vaccination requirements.

"This is not how our democracy is supposed to work," said Tara Hurst, executive director of the lobbying group Renew Oregon, which helped craft the climate proposal.

Rep. Rachel Prusak, a freshman Democrat from a Portland suburb, said she is "heartbroken over the state of our Legislature."

Eleven Republicans participated in the walkout, with one Senate seat vacant due to the death of veteran lawmaker Jackie Winters in May, from cancer.

Denyc Boles, who had been serving in the House, was sworn in Friday to take Winters' seat, restoring the GOP caucus to its full number of 12.

This story has been updated to correct the spelling of the last name for Rep. Rachel Prusak.___