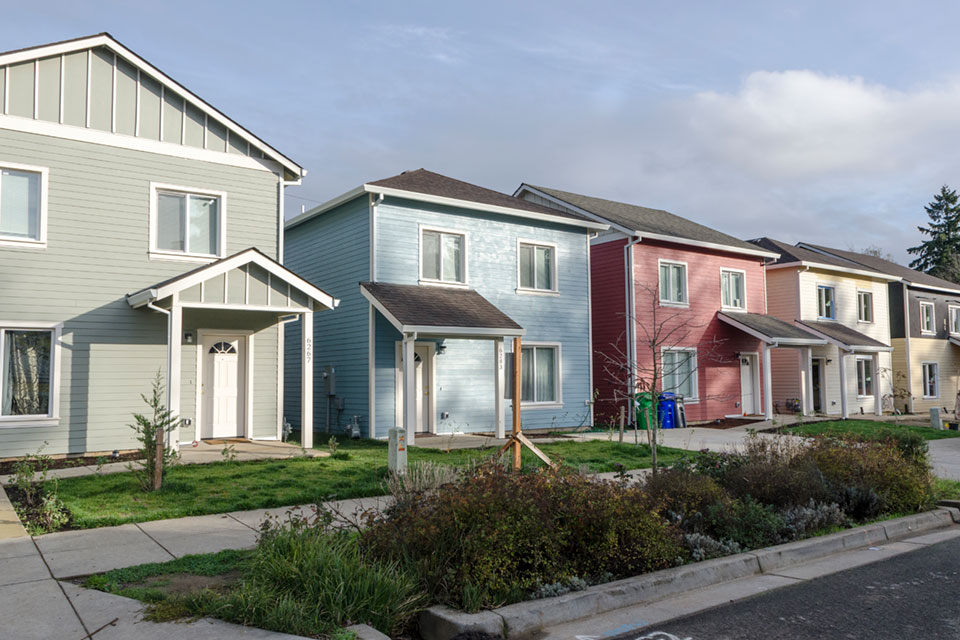 Last week the organization announced its Cost of Home campaign, part of a national initiative to address housing affordability and security that supporters say will be “customizable” for Oregon’s unique housing issues.

State Sen. Lew Frederick (D-Portland), present at the June 15 Habitat for Humanity Portland/Metro East home dedication where the Cost of Home campaign was announced, found it to be a perfect fit.

“I’m old enough to have been around when we would go down to Americus, Georgia, where Habitat for Humanity began, and watch them build homes for people,” Frederick said. “This really just continues their philosophy. They’ve already shown us that they can create and develop affordable homes. If you have an agency or a city or a neighborhood that does something that is exceptional, that really works and answers the questions people have been asking for some time, you try to incorporate them into any sort of public policy that’s going on. They’re a really good model for how you get things done, in terms of affordable housing.

"We desperately need affordable housing now, we need to help people get in and stay in their homes and be comfortable.”

In launching the campaign, Habitat for Humanity of Oregon cited the fact that statewide, 25% of renters and 10% of homeowners spend more than half their income on housing.

“Our goal is that collectively through our shared policy, we’re going to help 10 million people in the US go from this dire situation to paying less than a third of their income on stable housing,” Shannon Vilhauer, executive director of Oregon Habitat, told The Skanner. “Our rule of thumb is that if your housing expenses are within 30% of your monthly income, you've got an appropriate amount left over for everything else.”

The campaign takes an ambitious, multifaceted approach, with a heavy focus on Salem.

Vilhauer said Oregon Habitat advocated for a number of initiatives in the 2019 legislative session, including the successful Senate Bill 608, which prohibits landlords from ending month-to-month tenancies after 12 months of occupancy; House Bill 3028, which would increase the state’s Earned Income Tax Credit; and House Bill 2802, which would assist low-income homeowners with housing repairs and rehabilitation.

Habitat of Oregon was also a major advocate for House Bill 2001, which would increase density in neighborhoods previously only zoned for single-family residences. The bill passed through the State House last week, but faces an uncertain future in light of a waning legislative session.

“One of our objectives is fair access. In all parts of the state, we are struggling to attract market rate development of affordable homes for first-time home buyers,” Vilhauer told The Skanner. “Just like it's challenging here in Portland, it’s potentially more challenging in some place like Florence, where if a builder is building something, it’s often a 4,000-square-foot beautiful home with a view of the ocean. For communities of 10,000 or more, to have these options to put in duplexes -- we’re hopeful that might make it appealing to for-profit home builders. And then communities of more than 40,000 can have cottage clusters and townhomes. We’re hopeful we can attract more for-profit development of these more affordable development types.”

She added, “That’s part of our goal. We want to have home ownership opportunities that are affordable to a variety of income levels, and we think zoning opportunities are part of that long-term solution.”

Habitat is also asking the Legislature to include $200 million in general obligation bonds to support the Local Innovation and Fast Track Housing Program, which increases affordable housing stock.

Prominent Cost of Home supporter Rep. Alissa Keny-Guyer (D-Portland) thanked Habitat for “pushing policymakers in Oregon to come together to propose solutions that make the cost of home something every family can afford.” Vilhauer praised Keny-Guyer’s support for a controversial yet effective approach to funding affordable home ownership programs: mortgage interest deduction reform.

This year, Keny-Guyer was a chief sponsor of House Bill 3349, which would prohibit homeowners from taking a mortgage interest deduction on second residences on their personal income taxes.

“The mortgage interest deduction adds up to about $1 billion biennium,” Keny-Guyer told The Skanner. “That is by far our largest housing subsidy.”

She called it “one of the most egregious and racist tax policies in our country.”

Keny-Guyer said the new law, if passed, would only impact households making more than $200,000 a year, and that 96.1% of Oregonians who file taxes and can claim a mortgage deduction would not be impacted.

“All we’re saying is you shouldn’t get a tax break. What is the public policy purpose for giving them a tax break for a second home that’s just sitting there? My hope is we can pass the mortgage deduction reform so we don’t continue to exacerbate the income disparity by giving money back to highest income Oregonians who are financially and housing secure,” Keny-Guyer said.

She would prefer to see that money earmarked for programs that promote affordable home ownership, and for anti-displacement strategies to keep low-income owners in their homes with repair assistance.

“These are the kinds of things that could be funded if we redirected the savings from the mortgage interest deduction that currently goes to the wealthiest,” she told The Skanner.

While HB 3349 is not likely to move forward, Keny-Guyer is inspired by what she sees as increasing support for these reforms -- and by Habitat’s renewed focus on state- and national-level advocacy.

“I’m just really proud of Habitat,” Keny-Guyer said. “They went from a service organization, and they saw what a difference their homes make but how limited in scale they’re able to be with our current policies.”