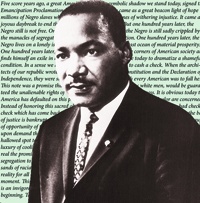 ATLANTA (AP) -- Hundreds of civil rights leaders and others crowded Martin Luther King Jr.'s Ebenezer Baptist Church on Monday to the celebrate the man and his legacy.
"We would be remiss if we did not commemorate Martin Luther King Jr., a champion of peace in a time of war," said Isaac Newton Farris Jr., a nephew of King.
The King Center has asked the nation to commemorate his birthday for 40 years -- for more years than the civil rights leader lived, Farris said. King was assassinated at age 39 on April 4, 1968, while standing on the balcony of a motel in Memphis, Tenn. He would have turned 79 this year.
Farris urged diplomacy, economic incentives and other nonviolent efforts "as an alternative to military intervention to end the war in Iraq."
Former President Bill Clinton, Republican presidential candidate Mike Huckabee and Atlanta Mayor Shirley Franklin were among the dignitaries attending the ceremony.
"Martin aimed high, acted with faith, dreamed miracles that inspired a nation. Can we act on King's legacy without dreaming? I think not," she said. "King's legacy gives light to our hopes, permission to our aspirations and relevance to our dreams."
Clinton told the congregation he appointed more black officials in his administration than all other previous presidents combined "not because of me, but because of the influence of Martin Luther King in my life."
"He freed us all to fight the civil rights battle, to fight the poverty battle, to fight all these battles and do it together," Clinton said. "He made a place at the table for all of us. He made the beloved community possible."
Clinton noted the diverse presidential race that includes a Mormon, a Black man and a Baptist preacher, as well as his wife, Hillary Rodham Clinton.
"How cool is it? You got all these different people seeking the presidency," he said. "And guess what? It's all possible because of Martin Luther King's vision of the beloved community."
The holiday has been observed at Ebenezer Baptist Church -- where King preached from 1960 until 1968 -- every year since his death. But it holds a new political significance this week because it falls closer to primary elections than in past years, since many states moved up their balloting.
South Carolina, which has a large Black electorate in the Democratic primary, votes on Jan. 26. And King's home state, Georgia, will be part of the Super Tuesday voting on Feb. 5, along with California, New York and 22 other states.
King's actual birthday is Jan. 15, but the federal holiday is observed on the third Monday in January. It has been a national holiday since 1986.
His widow, Coretta Scott King, worked for more than a decade to establish her husband's birthday as a federal holiday. She died in 2006 at age 78.