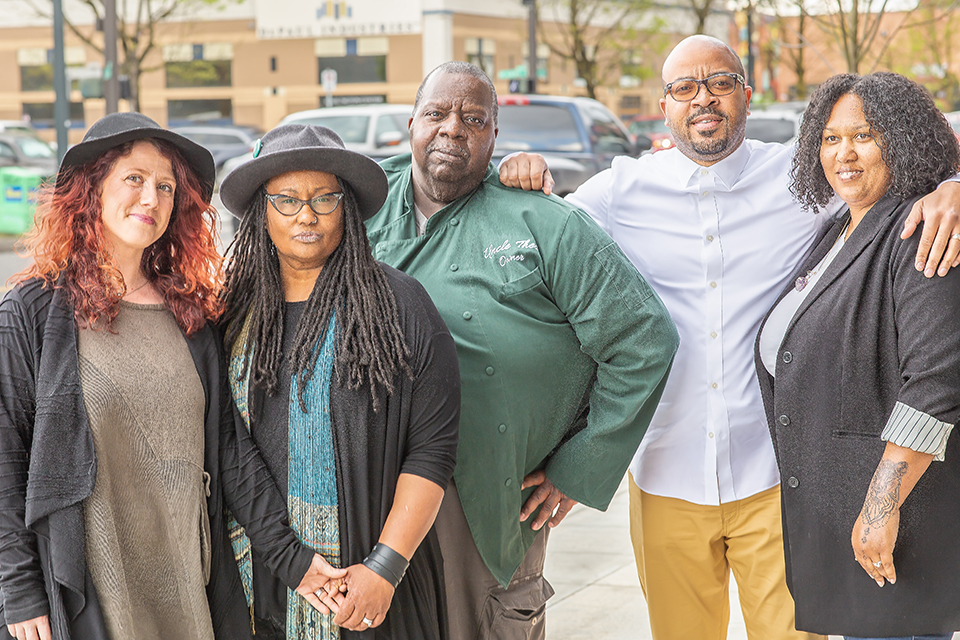 By Christen McCurdy | The Skanner News
Published: 02 May 2019

Three minority-owned businesses are moving to the corner of Martin Luther King Jr. Boulevard and Alberta in the newly constructed Alberta Commons Building that currently houses Natural Grocers and Wingstop.

Champions Barbershop opened April 20, greenHAUS gallery is scheduled to open in May and Cason’s Fine Meats will open at the new location in June. There will be a grand opening for Alberta Commons as a whole on June 22.

Dayna and Cole Reed co-own greenHAUS, a gallery and gift shop featuring vintage, custom and salvage art and household items on Northeast Killingsworth, which opened in 2016 and is moving to the Alberta location in May.

“We’ll be ready for the Fourth of July holidays,” said Theotis Cason, the owner of Cason’s Meats, who started his career as a butcher working for Safeway and Fred Meyer and eventually opened his own store, operating at several locations in North and Northeast Portland over the years.

The new Cason’s location will sell locally raised beef and chicken, raised without hormones or antibiotics and will offer services like catering. His nephew, Barry, who has worked with him for six years, is learning the trade, but is also a source of ideas and advice about doing business in 2019.

Jamaal Lane, who has operated Champions Barbershop at MLK and Failing for 10 years, and still operates Champions Barbering Institute on Northeast Killingsworth. The institute is staying put, but the barbershop is moving – increasing the number of barbers, adding a front desk and updating its look to a more “promenade-type feel.” The new location also includes services like scalp treatments, beard treatments and mini-facials.

“I just had a vision of longevity on MLK,” Lane told The Skanner. “I want to be celebrating 20 years still right here.”

Business owners said Prosper Portland approached them about the possibility of relocating to Alberta Commons, which completed construction in 2018.

In 2013 the city agency – then known as the Portland Development Commission – inked a deal to sell the lot for far less than market value to open a grocery store. A deal with the California-based grocery chain Trader Joe’s fell through after protests from the Portland African American Leadership Forum. Activists hoped affordable housing would be built on the site; they also released a list of demands that included small business assistance for minority-owned businesses and job creation for minorities. The city also committed $20 million in urban renewal funds for urban housing in North and Northeast Portland.

Ultimately, the city made a deal to bring Golden, Colo.-based Natural Grocers to the lot, but hired a Black-owned construction firm – Colas Construction – to build it and said the new development would offer space to minority-owned businesses.

Since discussion about the fate of the lot began in 2006, the population surrounding the surrounding neighborhood, which was once majority-Black and was already beginning to gentrify, has become Whiter and wealthier, and housing prices have climbed upward. Currently, according to a recent Portland State University Study, the Albina neighborhood is about 14 percent Black.

“For us, it’s not just selling goods. We want you to purchase hope, because we are in a time right now when a lot of us as Americans are feeling pretty hopeless. People of color in Portland are feeling isolated and hopeless, and so we look for the brilliance in the other underdog,” said Cole Reed.

Cole Reed is Black; her wife, Dayna, is White, and they have a four-year-old son. They moved to Portland from Arizona in 2015 due to Oregon’s more inclusive adoption policies, and in their new location, they hope to make space for community conversations about race and identity.

“We talk about race every day. We live in a city where it’s 75 percent White people, 25 percent ‘other,’ and of that other, it’s an extremely diminished amount of Black people,” Cole Reed said. “So we talk about the other, and we hope to have so many conversations that it’s no longer necessary to talk about the others.”