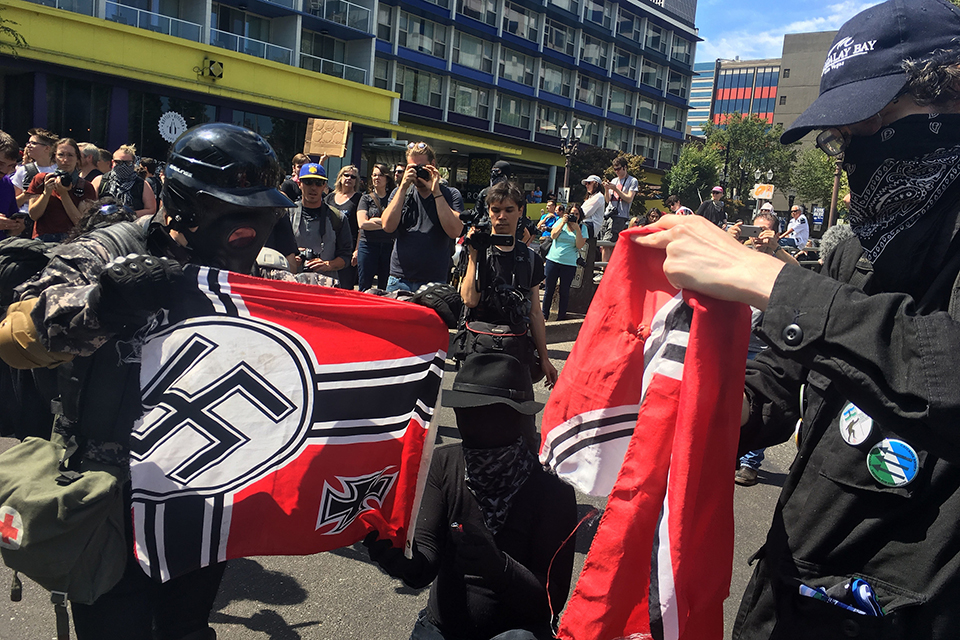 On Tuesday the Portland Police Commanding Officers Association (PPCOA) filed a complaint with Chief Human Resources Officer Serilda Summers-McGee against Mayor Ted Wheeler, Commissioner JoAnn Hardesty and Commissioner Chloe Eudaly and a grievance against the City of Portland. It charges that the commissioners’ public statements about Portland Police Bureau Lt. Jeff Niiya violate the city’s human resources rules and its contract with the union.

Last week Willamette Week and the Portland Mercury reported that Niiya, in charge of containing protests, texted repeatedly with Joey Gibson, the Vancouver, Wash.-based leader of Patriot Prayer, a group whose demonstrations have often descended into bloody clashes with antifascist demonstrators. The stories drew national attention and criticism from the named commissioners, prompted the mayor to call for an investigation of the texts and to ask Niiya to cease communication with Gibson.

The Portland Police Bureau announced there would be an internal review, released additional texts and the city scheduled a listening session, which will take place from 6 to 8 p.m. Feb. 21at the Maranatha Church, 4222 NE 12th Ave.

In a statement, Wheeler said police must remain objective and that the texts appear to "cross several boundaries."

"They also raise questions about whether warrants are being enforced consistently and what information is being shared with individuals who may be subject to arrest," he said.

In one text, Niiya tells Gibson he does not see a need to arrest Gibson's assistant, Tusitala "Tiny" Toese, who often brawls with anti-fascist protesters, even if he was the target of a warrant, unless Toese committed a new crime.

On Wednesday Willamette Week reported that the Multnomah County District Attorney’s office built a convincing case for prosecuting Toese but have so far failed to do so, in part because they’ve asked the police for more evidence and PPB has not provided it.

“This story, like many that have come before it, simply confirms what many in the community have already known – there are members of the Portland police force who work in collusion with right-wing extremists,” wrote city commissioner Jo Ann Hardesty after last week's stories were released.

Eudaly joined Hardesty and Wheeler in calling for an investigation, writing, “This revelation has only served to confirm suspicions and deepen the divide between the PPB and the community. All members of our police bureau must follow our rules and uphold our progressive values, not aid and abet groups and individuals bent on doing harm to our communities and responsible for terrorizing our city.”

PPCOA’s pending grievance alleges that these comments violate a clause in its labor agreement with the city, saying if it has reason to reprimand or discipline a commanding officer, “it shall be done in a manner that is least likely to embarrass the commanding officer before other employees or the public.”