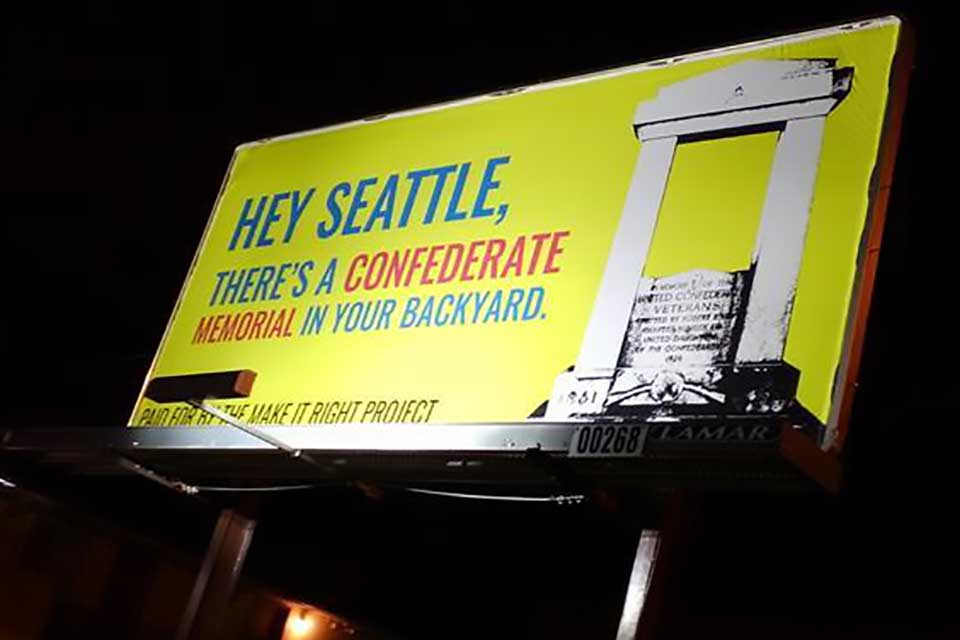 Seattle—The Make It Right Project put up a billboard in Seattle to ensure widespread awareness across the city of a local Confederate monument. Located in Lake View Cemetery, in Seattle’s iconic Capitol Hill neighborhood, the tribute to the Confederacy has stood on the site for more than 90 years.

The monument was erected in 1926 by the United Daughters of the Confederacy—the organization behind most of the 1,700 Confederate markers in the U.S.—the same year that the group dedicated its monument to the Ku Klux Klan in North Carolina. The billboard, which includes a picture of the monument, tells the city, “Hey Seattle, there’s a Confederate memorial in your backyard.”

“It notable that Seattle’s tribute to the Confederacy was carved from a 10-ton piece of Stone Mountain—the site where the Ku Klux Klan held its rebirth ceremony in 1915—that was shipped across the country from Georgia to Washington,” said MIR Director Kali Holloway. “The UDC sought to ensure that white racist terror was, both figuratively and literally, an elemental part of this monument. While the marker is surrounded by Confederate graves, there are no bodies directly beneath it, meaning it serves only to glorify the army that fought to maintain black chattel slavery.

"It is not a headstone, but instead a sculptural assertion of white supremacy and power.”

“The Loren Miller Bar Association joins the Make It Right Project in calling for the removal of Seattle’s Confederate monument,” said Loren Miller Bar Association president Erika Evans. LMBA is the Washington affiliate chapter of the National Bar Association, the oldest minority bar association in the U.S. and largest organization of African-American lawyers in the country. “We strongly believe our namesake, Loren Miller, who dedicated his four-decade career in law to fighting racial injustice and discrimination—and whose father was born into slavery—would undoubtedly support this effort to remove a symbol of the virulent racism he fearlessly confronted. Particularly in this moment, much like the moment it was erected, when hard-fought African American civil rights are under attack.”

“The Lake View Cemetery Confederate monument was put up during an era of intense racial violence in the South—a period that had also seen the Klan expand across Washington and Oregon, when lynchings became a common way of terrorizing black communities around the country,” said Michelle Merriweather, president and CEO of the Urban League of Metropolitan Seattle. “It continues to send the message it was erected to convey. The Urban League of Metropolitan Seattle—which has been fighting on behalf of Seattle’s most vulnerable communities for as long as this monument has stood—is loudly calling for its removal.”

Kali Holloway is the director of Make It Right, a project dedicated to working with multiple groups—activists, artists, historians and media outlets—to remove Confederate monuments and develop post-removal protocols to tell the truth about history.