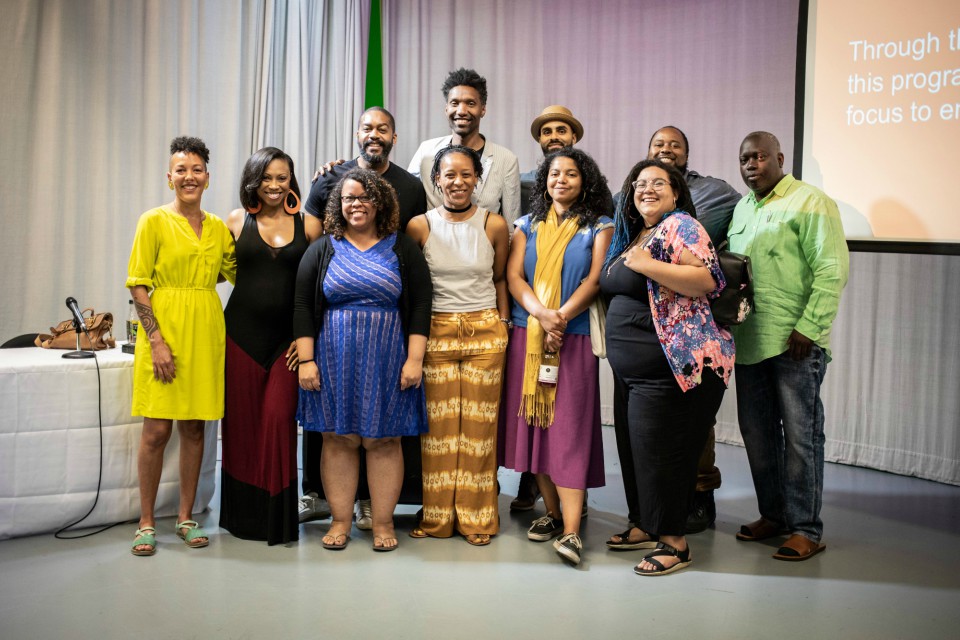 Called Open Signal Labs, the pilot program has invited six Black artists for an almost year-long filmmaking fellowship, which kicked off this summer.

In a grassroots search, the Portland-based participants were selected from across varying levels of career experience.

“We set up broad criteria,” said Ifanyi Bell, artist and executive producer behind the lab. “I thought, who do I know who is interested? Who is dedicated to the craft of filmmaking? Who has the time and who is local? I wanted to make sure we had an equal representation of women and men, and a diverse group of identity within the culture.”

For fellow Kamryn Fall, the lab represents a kind of homecoming. "As a transplant to Portland, finding the Black creative community was the most essential factor in making a home here, but I was becoming discouraged by the lack of momentum this group was able to make in this city.”

She added the fellowship has “completely changed the landscape and filled me with hope that Portland can truly support and elevate the black filmmaker community.”

Over the course of the fellowship, the participants will collaborate on group projects as well as produce their own work, from short films to documentaries and even experimental narrative features. Their works-in-progress, which are encouraged to hit both technical and artistic benchmarks, will be screened publicly in summer 2019.

Ultimately, the fellowship is a culmination of ideas that Bell brought to Open Signal. Since 2014 – when a nationwide conservation erupted following the fatal shooting of Michael Brown – Bell had been seeking a safe space to share conversations and creative output on Portland’s complex racial issues.

Unfortunately, he struggled to find it. His work in public radio and television then took him to Philadelphia and San Francisco, where he witnessed far more support for artistic institutions dedicated to exploring Black culture.

“I went to a lot of film festivals and art shows and people were totally engaged in this work that was specific to communities of color, Black identity and law enforcement,” Bell told The Skanner.

In 2016, he returned to Portland and began his relationship with Open Signal. Two years later, through months of brainstorming and grant-making, they launched Open Signal Labs.

“I think this program that we’ve started has become the fulcrum point around which the entire organization is revolving,” said Bell. “So much is hinging on this – not only is the community watching, but other public access stations around the country.”

As a filmmaker himself, Bell calls Open Signal Labs the first of its kind in Oregon.

“I’m hoping that it will be somewhat revolutionary in nature,” Bell said. “At the very least, it’ll be something that this city has never seen before, in terms of the quality of content coming from the community and the authenticity of the content.”

The lab is also striving to address the sheer deficit of Black professionals working in film and television.

Open Signal cited a 2018 study by the University of Southern California that noted of the top 1,223 American directors working between 2007 and 2017, only 64 (or five percent) were Black. Of those 64 directors, only four were women.

“We know the lab isn’t a genius idea,” Bell told The Skanner. “But I think there’s been an awareness of different peoples’ experiences within the creative community of filmmaking, and the white identity and male dominance of that space is finally being recognized.”

Bell also noted today’s economic and commercial viability of Black professionals within the entertainment industry, underscored by indie sensations like “Moonlight” and blockbuster giants such as “Black Panther.”

“So my feeling is, let’s feed this mechanism so it’s not a blip on the radar, it’s not an anomaly in the history of film and television,” he said. “My goal is to make sure that it’s sustainable, so there’s no longer that excuse of having no Black filmmakers, which is bullsh__.”

Thinking along those lines, Bell and the Open Signal team are working on bringing to Portland nationally recognized Black industry professionals – or “cultural capital” as Bell calls it – to influence the local filmmaking scene, especially for African American artists.

What’s more, the lab has already acquired a handful of mentors for its pilot fellowship, including Los Angeles-based actress and producer Keena Ferguson of the television program “Atlanta” and New York director and cinematographer Che Broadnax.

With financial support from the Mt. Hood Cable Regulatory Commission, The Collins Foundation, and the Portland Film Office, each fellow will receive a $2,000 stipend, plus access to equipment, training, and staff and actors from the Artists Repertory Theatre.

“If I could divide success into five ingredients, it would include opportunity, essential tools, mentorship, vision and courage. I bring the last two. This fellowship provides the rest,” said fellow Elijah Hasan.

So far, the lab has raised more than $250,000 and is looking to expand its budget into a more sustainable model. Ultimately, the goal is to solidify the fellowship as an annual program at Open Signal, with a more traditional application process on which past fellows could advise

“We want to make sure we keep the continuity of the experience, or brain trust, that happens here,” said Bell. “We don’t want to lose anybody, we want people to maintain connections.”