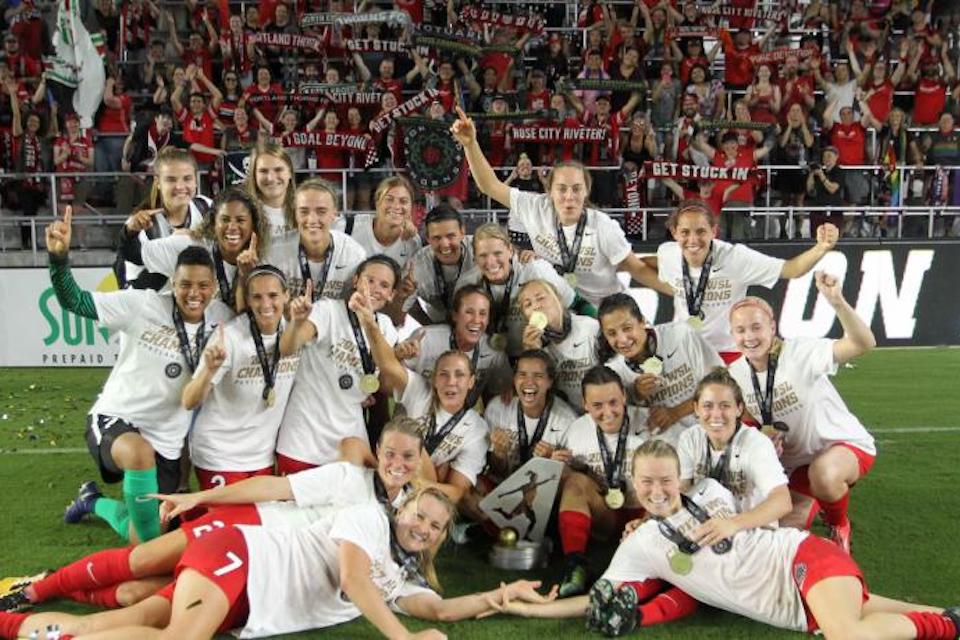 PORTLAND Ore. - When a team plays happy, they play well and when they play well, they win. The Portland Thorns FC came home happy last October after winning their second National Women's Soccer League Championship in its five year history.

"All of us associated with Thorns FC are honored to be selected as the Grand Marshal of the Starlight Parade," said Mike Golub, president of business for Thorns FC.

"The team is so proud to be part of an event that has long been an important part of our community."

Rose Festival board member and Starlight Parade Chair Amy Johnson along with the Rose Festival living history character Rosie the Riveter announced the selection at halftime of the Thorns match against the Orlando Pride.

Rosie presented the traditional bouquet of roses to the Portland Thorns in front of the greatest fan club in women's professional soccer; the Rose City Riveters.

"It's because of strong and capable women that the Rose Festival has succeeded for more than 111 years," says Amy Johnson, Chair of the PGE/SOLVE Starlight Parade.

"It's only fitting that we take this opportunity to honor a group of strong women that have made the Portland sports scene so successful."

Also winners of an NWSL Shield in 2016, Thorns FC have led the NWSL in attendance in each of the league’s first five seasons. Globally, Portland has the highest attendance of any women’s professional team in the world, averaging 17,653 fans in their fifth season in the league in 2017.

The Startlight Parade began in the early 1900s, when illuminated floats built on electronic trolley cars made their way through the streets of Portland on trolley tracks. Today, traditional marching bands, illuminated floats and unique hand-built entries will light up the night along the 2.25-mile route. The parade will feature a live broadcast on FOX 12 Oregon (KPTV) from 9-11 p.m. (Pacific).

The Portland Rose Festival Foundation is a 501(c)(3) non-profit that serves families and individuals with programs and events that promote the arts, education and volunteerism. We value environmental responsibility, diversity, patriotism and our historic & floral heritage.