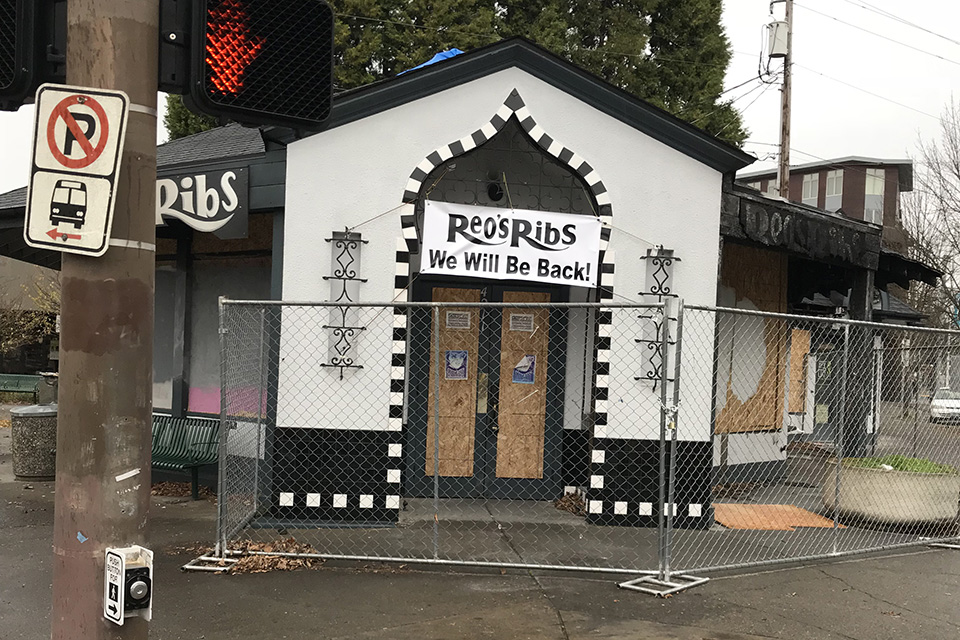 The owners of Reo’s Ribs announced this month that they plan to reopen the restaurant soon, although they don’t yet have a set date.

The announcement came in the form of a brand-new banner reading at the barbecue restaurant’s location at Northeast 42nd and Sandy, reading “We Will Be Back!” Varnado also posted a photo of himself in front of the banner with the message, “Thank you Heavenly Father for your blessings, it been a long time coming to everyone, “Reo’s Ribs” will be opening real soon, the best soul food from Heaven!”

Varnado and his partner, co-owner Myra Girod, told The Skanner they’re eager to re-open the facility after a May 8 fire forced the facility to close.

The owners told The Skanner they had a meeting with city officials this week to discuss next steps and don’t have many details yet, but Girod estimated reopening was at least a couple months away.

At about 3:30 a.m. May 8, Portland Fire & Rescue crews responded to heavy fire coming out of every window at the restaurant, and some initial news reports said the fire department had interviewed witnesses who said they saw people running away from the scene.

Shortly after the event, Varnado posted a Facebook Live video suggesting the fire was a racially motivated arson. Varnado was in Los Angeles at the time of the fire, shooting an episode of “Martha and Snoop’s Potluck Dinner,” a cable cooking show co-hosted by Varnado’s nephew, Snoop Dogg.

Later in May PF & R spokespeople said they saw no evidence of arson at the scene of the fire. The full fire investigation report, requested by The Skanner in June and obtained in September, includes an on-scene witness interview with someone who said she saw a group of Black juveniles running from the scene of the fire. That report concludes the fire was caused by an ember left burning in the barbecue pit.

In an interview with The Skanner Tuesday, Varnado expressed skepticism of the official account. He said he’d been assaulted twice at the restaurant and received a threat to the property itself. Varnado, who opened his first restaurant in Portland in 1999 and has relocated four times, was in 2010 the target of neighbors’ complaints about the smell of the smoke at a southwest Portland location.

Girod also expressed skepticism of the report’s finding. But she and Varnado also said they’re eager to get back to work, and to put their employees – who have been out of work for several months – back to work as well. Landlord Leon Drennan, who has owned the building since 2001, raised $3,030 through a crowdfunding campaign to help support the couple financially during the months their business has been closed.

Varnado said the restaurant, which seats about 20, is also a community gathering space, and he’s looking forward to seeing community members get together again.

“I’d like to see everybody come, enjoy themselves, talk and make new friends. This world would be a better place if people would just talk to each other,” Varnado said.