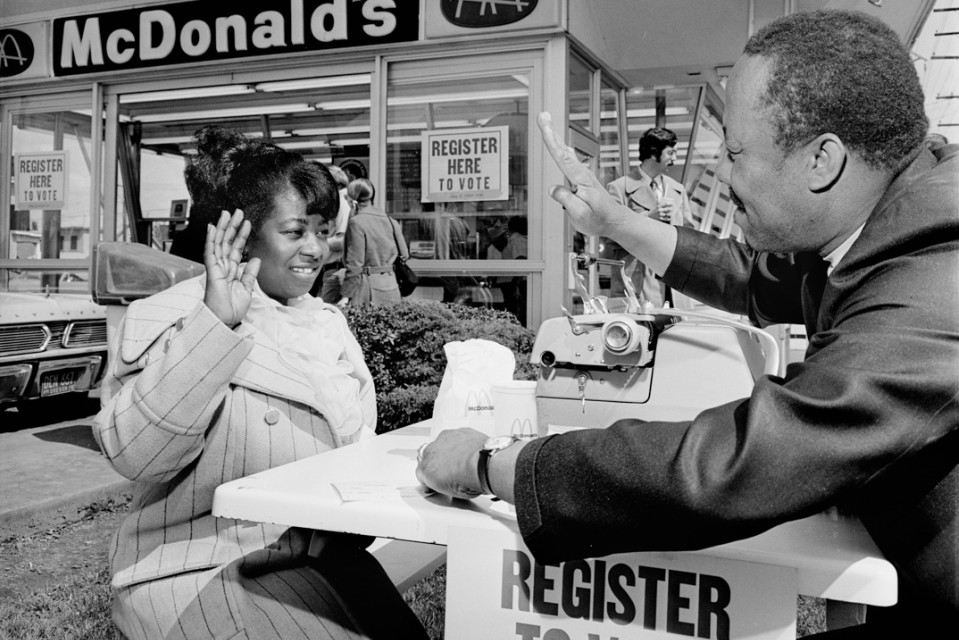 At the start of a new year, the Oregon Black Pioneers will invite Oregonians to join them in what they do best – looking to their shared past.

The historians’ newest and largest exhibit to date, “Racing to Change: Oregon’s Civil Rights Years,” will open on Jan. 15 at the Oregon Historical Society and will offer visitors an opportunity to experience the struggles and achievements of the 1960s and 70s in their home state.

For the past two years, the all-volunteer non-profit organization based in Salem has been collecting stories and overturning artifacts to compile an image of conflict, courage and change at a volatile time in history.

The exhibition picks up chronologically where its last one, "Community on the Move" – which examined Black Portland life in the 1940s and 50s – left off.

“We had just come out of the ‘50s, where there were certain (protective) laws that had been enacted, but the discriminatory practices were still roughly the same as they had been before,” Black Pioneers secretary Gwen Carr, told The Skanner. “And so people were still struggling with trying to get an education and a job and a home.”

It was those racist attitudes and policies of exclusion faced by Oregon’s Black population that spurred the civil rights movement, which was largely reflective of what was happening on the national stage.

Nevertheless, through the dedicated efforts of volunteers, the Pioneers have composed a regional portrait of the struggle towards equality from various archives, private collections, and personal and public stories. The result is a larger cultural and legal context of discrimination and displacement at that time.

“It’s important to point out that the photo work in (the exhibit) is really of Oregon’s time and Oregon people,” said Black Pioneers president Willie Richardson, who noted many civil rights movement retrospectives focus on southern states. “You’re going to be looking at your hometown folks who were activists.”

In the 1960s, Black culture went through tremendous change, giving rise to a new sense of Black identity with Afro-centric style. So part of the fun of the exhibit, the Pioneers told The Skanner, is seeing how the some of the movers and shakers of Oregon communities – including Portland State professor Darrell Millner and education advocates Ron Herndon and Joyce Harris – looked back then.

“I think one of our lessons learned from prior exhibits is that because there is so much material, and so much to say, that you tend to want to say it all,” said Carr. “And yet in an exhibit, you have to find that balance between saying it and showing it – or having people experience it.”

In addition to rare photographs of the movement’s key players, “Racing to Change” includes artifacts, captions and quotes in place of heavy texts, as well as interactive components, including a chance for visitors to act out scenes from the Sidney Poitier classic film, “A Raisin in the Sun.”

Students as catalysts for change

Visitors can also experience a mock dormitory room – decorated with posters of Black Power icons and various paraphernalia of the era – to get a sense of what a college campus might look like back then.

“A lot of what was going on then was centered on college campuses, so you’re looking at eastern Oregon, southern Oregon, that’s where the action was taking place,” said Carr. “The more research we did, the more we found how important young people were as a catalyst for that across the state.”

With historically Black neighborhoods and businesses being demolished, and school integration measures proving to be more disruptive than intended, students became exceedingly frustrated with the lack of progress and so made their voices heard.

Carr herself was actively involved in the civil rights movement in Los Angeles, where she attended a small private college.

“So seeing this again and talking about it brings back memories,” she said. “When you’re in college you’re trying to figure, ‘what can I do?’ But we hit the streets with signs, we had forums and we had allies.”

The exhibit will also cover how media, in addition to other forms of communication and expression in Black  communities, became more influential at that time – including theater, newspapers, radio stations, and even the churches – particularly with the Vietnam War that spanned the era.

Aimed at people of all ages and backgrounds, the inclusive exhibit works to bridge the generational gap and will feature activities for children, as well as offer a corresponding curriculum for teachers.

“Racing for Change” will also coincide with monthly associated programs to engage the community, including untold stories of women of color and a family day.

And while the 1960s and 70s was an unprecedented time of social and cultural upheaval, today’s politic climate – and the public uprising in opposition – has been compared to the similar vigor of those days.

“Racing to Change” doesn’t leave that out either. It includes references to Black Lives Matter and current social justice movements.

“Some of the stuff that’s happening now was the very stuff that was being fought for in the ‘60s and ‘70s,” said Richardson. “So there’s a continuum in helping young folks see that.”