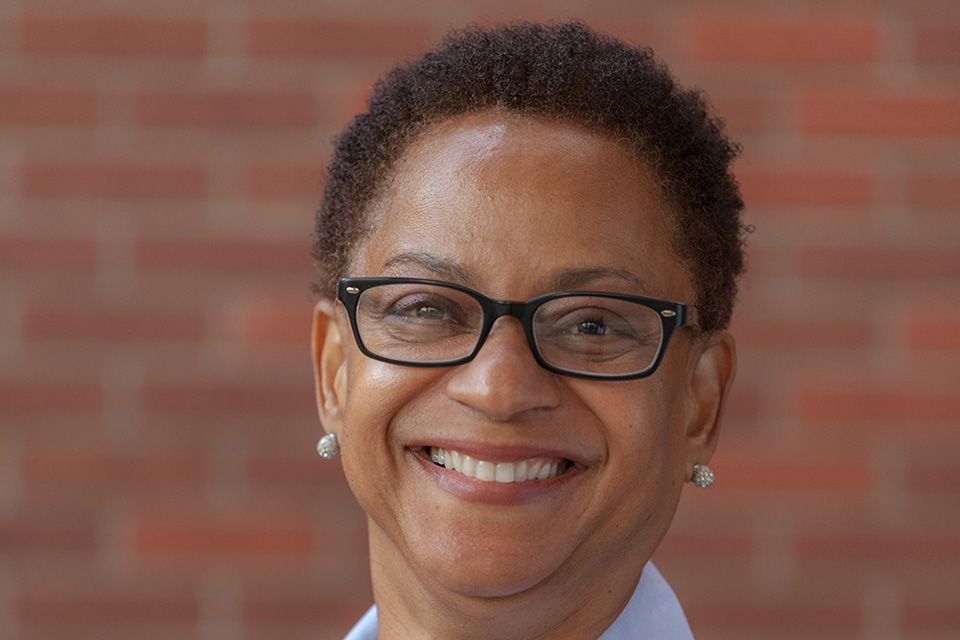 Growing up in Trinidad, Charlene Alexander never thought there was anything she couldn’t do.

“I grew up in a culture where I was part of the majority. I saw examples of women, including my mother, in leadership roles in every area of society. I never had this perspective that I couldn’t do whatever I wanted to do,” she said.

Only when she emigrated to the United States at 17 did Alexander start to see and think about how oppressive structures can hold individuals back.

Alexander, the new vice president and chief diversity officer at Oregon State University, moved to Corvallis in July and started her new job – a position that is itself newly created – July 1.

There’s no typical work week, she said, but she’s spent her first weeks at OSU meeting with stakeholders – including faculty, students and members of the administration -- and listening.

“My work is to educate students to advocate as leaders. It’s their responsibility in schools to see the power that’s within them, to make sure they have all the resources they need to be successful in school. These are socially constructed barriers for a whole host of reasons, obviously, given the whole history of the country,” Alexander told The Skanner.

Alexander comes to OSU from Indiana’s Ball State University, where she worked in a variety of positions over the course of 20 years. Most recently, Alexander served as Ball State’s associate provost for diversity and the director of its Office for Institutional Diversity. There she helped the school establish its first diversity advisory committee and develop its first diversity strategic plan.

“Charlene was an outstanding faculty member whose expertise was often used when difficult situations arose at the university,” wrote Marilyn M. Buck, Ball State’s interim provost and interim executive vice president for academic affairs, in a statement emailed to The Skanner. “She was always an advocate for underserved populations and was highly respected across the campus. She worked with departments to increase the diversity of applicant pools and our continued rise in employee diversity levels is due to some of her work. We believe that we are a more sensitive campus to the needs of all faculty, staff, and students because of Charlene’s work on our campus.”

In addition to meeting with stakeholders, Alexander said she’s reconfigured a couple of leadership committees and created training opportunities for faculty and staff. Faculty are also engaging in a “crosswalk of the curriculum,” reviewing gaps in the school’s diversity curricula. The president’s task force on diversity is also reviewing recruitment and retention practices and how the school reports bias incidents.

Alexander said she was contacted by a consulting firm last December on OSU’s behalf, and spent significant time researching the position before deciding to make the leap. One of the clinchers, she said, was her conversation with OSU President Ed Ray, to whom she reports directly.

“I have never met someone who was so passionate about these issues. Someone who understands that he is a White male and what that means here, and what it also means that he doesn’t know – that he knows what he doesn’t know. With that level of awareness and passion, at the end of that meeting, I thought this is absolutely somebody I want to work for,” Alexander said.

The Skanner was not able to reach Ray, nor representatives from OSU’s Black Student Union or the Lonnie B. Harris Black Cultural Center, for comment. Ray created the vice president and chief of diversity role in 2016; Alexander succeeds Angela Batista, who was appointed as the university’s interim chief diversity officer and vice president in February 2016.

Alexander started her academic career wanting to be a dentist. The combination of a particularly bad physics class and a particularly good psychology class – which she took the same academic term – changed her mind.

“The fact that you could study and predict human behavior just seemed to be this amazing thing to me as a discipline,” Alexander said.

In her doctoral program, Alexander started to focus on multicultural counseling and how issues of identity and race affect one’s psychology. Before shifting to administrative work, she worked as a counselor in university counseling settings and as a professor of psychology. She wants to help students understand the “power and worth” of who they are, and to make sure they’re accessing the things they need to succeed – as well as that the curriculum is culturally appropriate.

“My commitment to ensuring that kids -- and others -- understand the power and the worth of who they are is people is really important. That’s a real passion of mine," Alexander said.