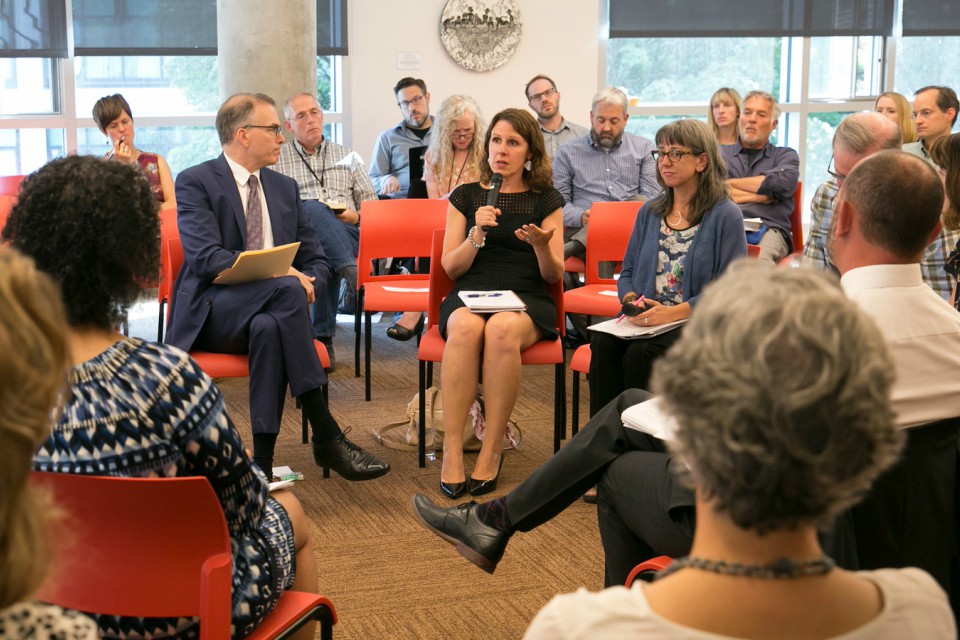 After one of Multnomah County’s highest ranking African American officials, Tricia Tillman, was ousted last month from her job as public health director – followed by the retiring of Health Director Joanne Fuller, along with more than a dozen people testifying to the practice of systemic racism in the county workforce – Chair Deborah Kafoury has turned up the pressure.

Last Thursday, the chair set a spring 2018 deadline to improve progress in workforce equity and review the county’s human resources structure that could be attributing to institutional racism.

During a quarterly meeting last week with Health Department leadership and Chief Operating Officer Marissa Madrigal, Kafoury stated, “We know there is institutional racism at Multnomah County. This is an organization that was built on the backs of people who didn’t have a voice.”

“It will be long, hard process,” continued the chair. “It's going to take a lot of open conversation and reflection. I do know that we are committed, your board of commissioners is committed."

Kafoury’s plan is to hire a national consulting firm with practice in dismantling structural racism in public institutions. To do so the firm would have to scrutinize the county’s existing human resources framework, examine policies and practices from hiring to termination, and most importantly, evaluate the complaint and investigation process, using the dismissal of Tillman – who called for a probe into racist practices at the county – as a case study.

In response to bringing in an outside consulting firm, Tillman told The Skanner, “I’m hopeful that this firm has been well vetted by diverse community leaders and staff with expertise in structural racism – and that they have the opportunity to look beyond overt acts of racism to address impacts of implicit bias.”

The county’s chief human resources officer, Travis Graves, recently concluded an inquiry into Tillman’s termination using more than 120 pages of documents, including texts, emails and hand-written notes. In his summary letter, dated Sept. 25, Graves said he “did not find any evidence to support the conclusion that Ms. Tillman’s race or protected leave were negative factors in her continued employment.”

“The record shows that both subordinate managers and Health Human Resources began receiving a number of complaints concerning Ms. Tillman’s management over the organization beginning over a year ago,” Graves wrote.

He added that Tillman received feedback regarding her performance from multiple sources – including from her supervisor, human resources, peers, and from at least one consultant – on what appeared to be her lack of clear direction.

Yet Tillman’s 2016 performance records – released through a public records request by the Portland Tribune – show a different story, one where the public health director received entirely positive reviews.

“The process by which the inquiry was conducted, analysis, conclusions, and release all serve to reinforce the reasons why I asked for an investigation of systemic racism,” she told The Skanner.

In exchange for not suing the county, Tillman received a settlement of a year’s salary, plus a sum of $25,000 and a letter of reference.

Commissioner Loretta Smith, too, was dissatisfied with Graves’ findings and held her own press conference the day after the HR officer concluded his investigation. Smith was joined by Oregon’s first African American woman legislator, former Sen. Margaret Carter, as well as Sen. Lew Frederick (D-Portland), one of three Black state senators, to publically address the recent events of racial bias within the county's employment practices.

Smith – who was also the subject of a county investigation earlier this year – asked the chair for an outside investigation into institutional and structural racism.

In addition to the consulting firm, Kafoury is calling for all racial complaints to be taken directly to the chief operating officer and department directors. As it stands now, employees register complaints by calling the good government hotline, or by talking to their supervisors.

The county will also collaborate with community members and the office of diversity and equity to develop the new strategy.

In the meantime, Madrigal said a national search will be considered in hiring a new health department director and has urged employees to reach out about concerns.

As for Tillman's future, she told The Skanner she is “committed to continuing to work for racial justice. I will start work again this month and I am considering other opportunities.”