A New Vision for Albina 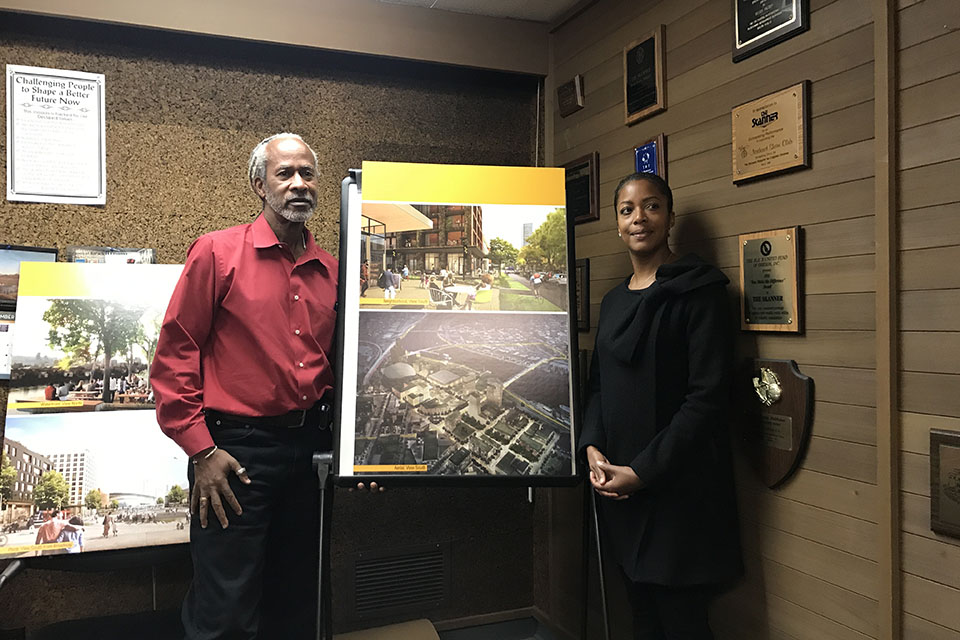 A group of volunteers has put together an ambitious new plan for Northeast Portland – one they envision as livable, equitable and taking full advantage of Willamette River access.

Group members Rukaiyah Adams, chief investment officer at Meyer Memorial Trust and Michael Alexander, the retired CEO of the Urban League and a former member of Regence Blue Cross Blue Shield’s management team, unveiled drawings last week that were the result of two years of discussion and visioning by a group involving community members, developers and leaders in the business community.

The plan – which for now is called the Albina Vision – includes mixed-use buildings and dense housing that can accommodate multiple income levels, as well as easy access to amenities. Adams noted that when she commissioned the drawings, she guided illustrators to portray residents of many races, and to include cultural signifiers that show the envisioned neighborhood is not just for affluent White people.

Adams said the group was convened at the behest of then-Mayor Charlie Hales and that the guiding concept has been twofold: to push back against the “primacy of the car” in urban design, and to buck a longstanding trend of displacing Black communities to neighborhoods with lower property values and fewer amenities.

The plan incorporates an area situated on the north by the Broadway Bridge and the Blanchard school site, on the south by the Steel Bridge, on the west by the river, on the east by the Lloyd district.

Adams took inspiration from the city of Berlin, Germany, the Presidio in San Francisco and Battery Park City in New York, and sought to incorporate arts in the design as well as taking advantage of access to the river. It includes a new street grid that would build over the Interstate-5. (Adams and Alexander said they are “agnostic” on the proposed plan to widen the freeway.)

“This is a vision that will hopefully guide the development over decades,” Alexander said.

The project is ambitious from a design perspective, and details on the “how” are murky. But organizers also want its execution to be guided by a different set of principles than have guided Portland’s urban development in the past.

“It’s the ability to talk and to think without being constrained by, ‘How do we make the most money?’” Alexander said.

‘This is our home’

“Time doesn’t stop. We’ll continue to see change. We can either direct the change or witness it,” Alexander said. “It goes without saying there have been a number of times in the past, particularly in Northeast Portland, when the community has seen change foisted upon it, and has not felt very positively engaged, respected or treated.”

The construction of the Veterans’ Memorial Coliseum and Moda Center (originally known as the Rose Garden) is a case in point. The Veterans Memorial Coliseum opened in 1960 and was part of a series of “urban renewal” projects for which hundreds of homes, many occupied by Black families, were razed.

Or as Adams puts it, “We destroyed the homes of Black veterans to put up a monument to White veterans.”

Adams’ vision for the project includes a public memorial to the Great Migration, the historical term for the movement of African Americans from rural, Southern communities to urban communities in the North and on the West coast. That includes Portland, whose Black population grew tenfold during World War II.

Adams’ family came to Portland shortly before World War II, and she’s engaged with the project out of a sense of obligation to that history.

“Our story is a story of itinerancy. We were brought on boats, and the motion of the sea cast us upon the eastern shore of the United States. We moved northward, and east and westward voluntarily, on foot, by car, escaping violence. Then we arrive in the city (of Portland) and a flood displaces us from our original neighborhood here. Urban development pushes us north and east,” she said. “This is the first time that African Americans have been able to stop, turn around and say, ‘We’re not going anywhere. This is our home. It belongs to us.’”

One of the distinctions between this vision and a more traditional development master plan is that stakeholders envision a different governance structure. No official organization has been formed, but stakeholders are mulling the creation of a nonprofit with guiding principles that can carry development into the future.

“We want the city to come to the table as a landowner, not as a regulatory authority,” Adams said. She said Hales deliberately convened the group outside of the “sausagemaker” of what was then called the Portland Development Commission, which had been accused of generating  inequity in the past.

Right now, Vulcan leases the property under the Rose Quarter, but owns the river front land, and is in the process of conversations with the city to renegotiate the lease. That means next steps are “murky,” Adams said. But murky, she added, is okay.

The Albina Vision group is not the only group to cast an eye towards developing the Rose Quarter in recent years. Last fall, The Oregonian reported that a group of developers had “quietly pitched” a plan to redevelop Memorial Coliseum, which is on the National Historic Registry and is in need of repairs. Mayor Ted Wheeler has sold the I-5 redevelopment plan as an economic boon for communities of color, though no advocacy groups representing communities of color have taken positions on the subject and few citizens of color have commented.

In 2012 Portland architect and urban designer Michael McCulloch created a plan for the Portland Development Commission (now called Prosper Portland) called the Rose Quarter District Plan. The advisory group included personnel from Nike and the Trail Blazers, and included a plan to put a large running track inside the Coliseum. That plan languished, he said, because Nike never pulled the trigger.

“There’s been plan after plan after plan for this,” McCulloch said. “The problem is, architects can dream up all kinds of cool stuff and they can draw all kinds of cool stuff. That’s not a problem. Getting the political and economic forces to align, that’s the problem.” One major problem he foresees is moving the railroad, which takes up a lot of waterfront property in Northeast Portland.

But, McCulloch said, one big change can set off a chain reaction.

John Russell, who developed PacWest Center and 200 Market and has served on numerous design commissions and chaired the political committee of the Oregon Business Association, has spoken with Adams and Alexander about the Albina vision and is also skeptical, given the complexity of what the stakeholder group has in mind.

But he noted that Paul Allen’s involvement in the project is an encouraging indicator. Allen was instrumental in the redevelopment of South Lake Union in Seattle, an area Russell describes as a “jewel” which was previously downtrodden.

“Allen has some experience that gives me some optimism that his development company, Vulcan, is willing and has the knowledge to do some dramatic things,” Russell said.

Alexander and Adams acknowledge the current version of their plan is light on specifics. But they’re also in it for the long haul – for the Portland of a few generations from now.

“We’re impressing our cultural values on our economy. We’re saying that our commonwealth here is really, really important,” Adams said. We don’t want to just drive individual wealth through a development plan where people will name buildings after their English children’s names. We’re not trying to drive individual wealth, although there will be tons of contracting opportunities and tons of wealth-building in this, what we’re really saying is we want to build community up here. We want to be intentional about that.”