Woman Attacked on MAX Before May 26 Murders Comes Forward 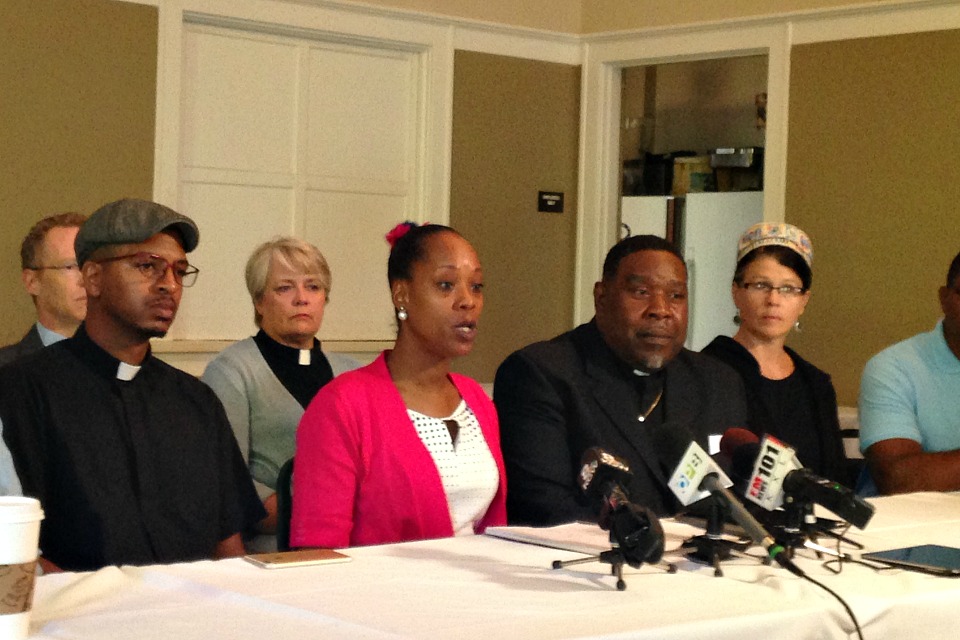 On the night of May 25, 2017, Demetria Hester, 42, was riding the TriMet MAX home after work, just past 10:30 p.m. She got on the Yellow Line at the Kenton/Denver stop and took a seat directly behind the train operator.

Three stops later she says she was verbally and physically assaulted by a raging man who told her he was a neo-Nazi and that she – a Black woman – had no right to be in his country.

His name was Jeremy Joseph Christian. Less than 24 hours later, he would brutally stab to death two men on MAX, and injure a third. All three were attempting to protect two young African American women from his racist threats.

Following the recent hate-fueled violence in Charlottesville, Va., Hester – whose story was shared anonymously in May – was prompted to come forward to the press Friday to share her personal story about what she witnessed as a lack of police protection against neo-Nazi attacks.

The recounting of her story was supported by a coalition of interfaith and community leaders at the Billy Webb Elks Lodge in North Portland. Rabbi Ariel Stone of Portland Interfaith Clergy Resistance and activist Teressa Raiford were on the panel.

Pastor E.D. Mondainé, of North Portland’s Celebration Tabernacle Church, opened by remarking that the intent of the conference was “not to demonize Portland Police, but simply to ask the central question as to why this was allowed to happen to any citizen, but especially this woman of color.”

“Portland has been crowned the Queen of White Cities. The Whitest city in America,” continued Mondainé, who added that Portland has a unique opportunity to turn the scales of injustice around.

Hester’s disturbing account was an attempt to prove that the fatal MAX stabbings on May 26 “were not only preventable, but were the direct result of ineffectual, racially biased policing by Portland Police,” reads the coalition’s statement to the press.

She then knocked on the door of the MAX operator for help, but received no response.

Hester recalled how the ranting went on for three stops, while not one of the 25 or so people on the train spoke up.

When Hester was preparing to get off the train, “he told me, ‘Bitch, you’re about to get it now.’” Christian then hit her in the head with a Gatorade bottle.

Fighting back, she pepper spayed him and kicked him in the groin.

After leaving the train at the Rose Quarter stop, Hester sat on a bench to catch the Green Line. She explained how two TriMet workers, who apparently witnessed the entire incident, did nothing.

Meanwhile, Christian stopped at a nearby drinking fountain to wash the mace from his eyes.

When two police officers arrived, Hester said she relayed the encounter to the police and pointed to her assailant.

(According to Portland police, in their summary account of the May 25 events, Hester did not identify Christian as the assailant immediately, but another witness did point him out.)

Hester claims that one of the officers said, “No, I asked him (Christian). He said he had nothing to do with it.”

Only when the MAX operator backed her story, did the police believe her, she said.

Officer Nelson Glaske then asked Hester – who was bleeding from her eye – for her I.D., but not for Christian’s.

Glaske told Hester they were waiting for another officer to arrive; during that time, however, Christian then left the scene.

Hester claimed one of the officers made a small effort to catch up with Christian in his patrol car. When the officer returned to the TriMet stop, he told Hester he did the best he could.

Hester replied by saying, “Catch him, because he’s going to harm or kill someone.”

The next day he did.

“I should feel safe in Portland. I don’t,” said Hester, who is originally from Tennessee and has “seen racism at low and high levels.”

She’s left to question why police and transit officers fail to protect people “when we pay their salaries.”

After learning that Christian had slayed two people on the MAX the following day, she said her heart dropped. “It’s beyond disturbing. Words cannot express how sad and bitter I felt.”

The following Tuesday, after the MAX murders, Hester was contacted by police to testify against Christian.

Visibly shaken while telling her story, Hester ended by saying, “Let’s stop the hate, from the President down.”

His full-day bail hearing is set for Oct. 20.

Our thoughts are with Ms. Hester as well as those touched so deeply by the May 26 attack, and all those who struggle daily against hatred and bigotry.

TriMet, Transit Police and our law enforcement partners work every day to provide safety on the transit system and in the region. During the May 25 incident, the operator immediately contacted the Operation Command Center and a supervisor was dispatched to meet the train. Portland Police Bureau’s statement details the events that occurred following that.

Transit remains a unifier, connecting people and creating a stronger community. TriMet believes there is far more that unites our community than divides it. Acts of hate and violence, here and elsewhere, create fear in our community and can only be addressed as a community. We will continue to stand up against hate and work toward unity with our police and community partners.

The Portland Police Bureau is aware of questions in the community regarding the response to an assault investigation on May 25, 2017, that occurred on a MAX platform. This assault investigation involved Jeremy Christian, the suspect indicted for the deaths of two men and the injuries to another man on a MAX train the following day.

Because both of these cases are pending, the Police Bureau cannot release reports, but can outline what occurred:

On May 25, 2017, at 11:36 p.m., and officer was dispatched on a priority call to the Rose Quarter Transit Station, regarding a disturbance between a male and female. No other officers or Transit Police were in the area.

Upon arrival, the officer contacted individuals standing at the platform and asked if they had been involved in a disturbance. No one indicated they were involved. The group included Jeremy Christian, but at the time, the officer had no information to know he was the suspect. The officer then contacted the victim who was standing with two TriMet supervisors who had called for medical to come to the scene. A witness was also standing with the victim.

The officer began to interview the victim and witness, who stated the suspect had thrown a plastic Gatorade bottle at the victim, causing injuries in the eye area.

The witness pointed to a man standing near the fountain (who was identified as Jeremy Christian the following day), and said it was the man who had thrown the bottle. The suspect did not appear to be concerned police were there was not trying to leave the scene.

The officer asked the victim twice to confirm that Christian was the man who had assaulted her. The victim told the officer Christian was not the suspect both times. During traumatic incidents such as this, officers often interview people who need more time to process the information.

At this time, the officer did not have reasonable suspicion to detain Christian. Meanwhile, the suspect began casually walking away, and then the victim identified him as the man who had thrown the bottle at her.

The officer then returned to the location to continue to interview the victim and document what occurred. She told him about what had happened between her and the suspect on the Max train and what subsequently led to the assault on the platform. The officer took photos of the victim's injuries and then TriMet provided a ride home for her. The officer then recovered the bottle, photographed it as well and logged it into the property room.

The officer notified his supervisor of the incident and contacted TriMet to pull the video from the train so it could be logged as evidence. The officer also searched YouTube just in case there were any videos posted from people on the train or platform, but he did not locate any.

On the next day, May 26, 2017, the officer saw news reports and recognized the suspect from the May 25th assault as Jeremy Christian. He notified supervisors on the scene of the homicide about the incident on May 25, 2017.

"The Police Bureau understands the emotion and fear of hatred that has occurred in our community," said Acting Chief Chris Uehara. "We will continue to lift up, support and protect all community members."