Urban Farming for Everybody 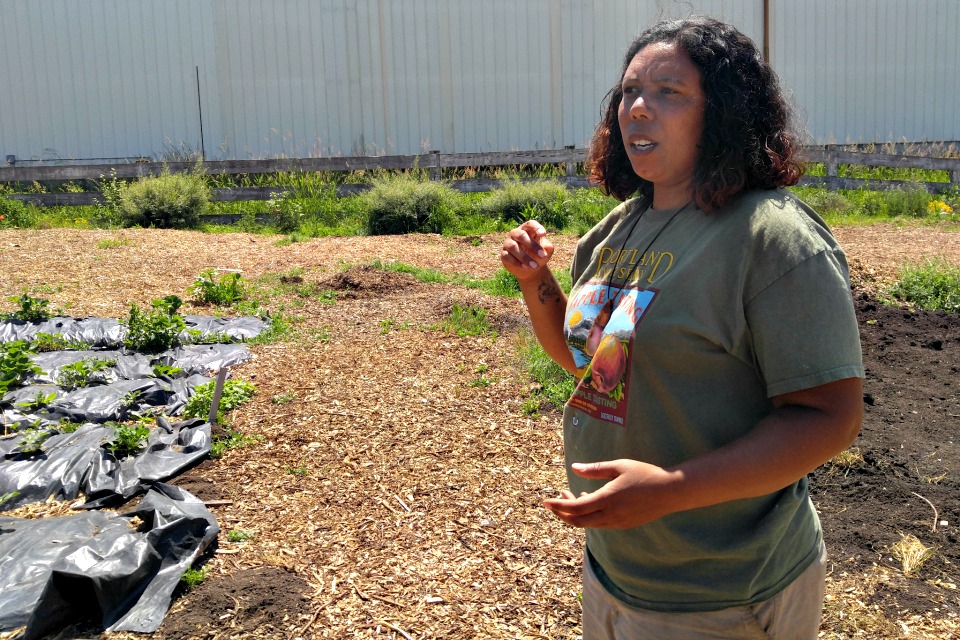 Johnson’s great-grandmother grew berries for the J.M. Smucker company, and her family grew much of its own food. Shavers helped his grandmother in the garden when he was young. After they met they kept a garden wherever they could – in community garden plots or in the back yard of a condo – but dreamed of having their own farm.

Prior to the company’s launch, Johnson worked for Multnomah County as a community health worker and breastfeeding peer counselor. Shavers had worked as a leather smith, firefighter and emergency medical technician.

Having inherited an interest in growing food, they wanted to pass that on to their children: they each had two from previous relationships when they met, and have since had two together.

“We wanted to teach our kids to be self-sufficient,” Johnson said.

They also wanted to create a community space – one where diverse groups can learn and work together – and finally found the opportunity to do so when they were asked to help manage the food bank’s farm earlier this year.

The farm is situated right next to the Oregon Food Bank’s Portland location, and people who volunteer there can go home with food they harvest. School groups come to learn and volunteer, and recently, Johnson said, a group of adults with developmental disabilities started coming to work on the farm. Johnson and Shavers are working on creating an outdoor classroom space, and also making sure there are kids’ activities nearby for adults who come to work and learn at the site, since a lack of child care can be a barrier to volunteering for some people.

“We have a really heavy youth and child engagement direction that we want to go,” Shavers told The Skanner.

Johnson and Shavers also work at other sites, assisting with community gardens and teaching gardening classes throughout the community.

The couple are also cofounders of the Black Food Sovereignty Council, and engaging African Americans and other people of color with their work – including advocating for more opportunities for people of color to grow food and own their own land.

“You don’t see a lot of folks of color in urban farming,” Johnson said.

Many people who come to volunteer at the farm, she said, have gardened in the past but have lost their yards or community garden spaces due to gentrification.

“Everybody’s looking to grow food because they’re losing that space,” Johnson said. “Even container gardens in apartments are not an option to everyone.” Some property managers don’t allow containers, and other spaces just don’t afford enough space or light for even small pots, she said.

In addition to working with youth in schools, Johnson and Shavers are working to engage older generations. MudBoneGrown is working with Nathan McClintock, an associate professor at Portland State, on a series of interviews with older people about their gardening practices to document them for posterity.

“Our elders are dying off, and I think there’s a lot to learn from older folks that’s useful to us,” she said.

MudBone Grown was launched in 2016, and was the culmination of years of sacrifice. Johnson and Shavers even moved into a motor home last winter to save money for land. When they were approached earlier this year to partner with the Oregon Food Bank, it was a dream come true.

“It was an honor to be given such a big space,” said Roberta Eaglehorse-Ortiz, who manages a community garden at the same site. A doula and midwifery student, Ortiz’s garden focuses on growing herbs for women’s health, and she works with Johnson to engage and educate those to who come out to the site. “I really want the best for all of our families.”

Eaglehorse-Ortiz had never grown food before, but makes a ready connection between food and her other work – and Johnson, a former doula herself, sees that connection as well.

“It’s been really great. I don’t mind working really hard days out here,” Johnson told The Skanner. “There’s a lot of healing in the soil that can happen and that’s why I believe it’s important to return to the land.”