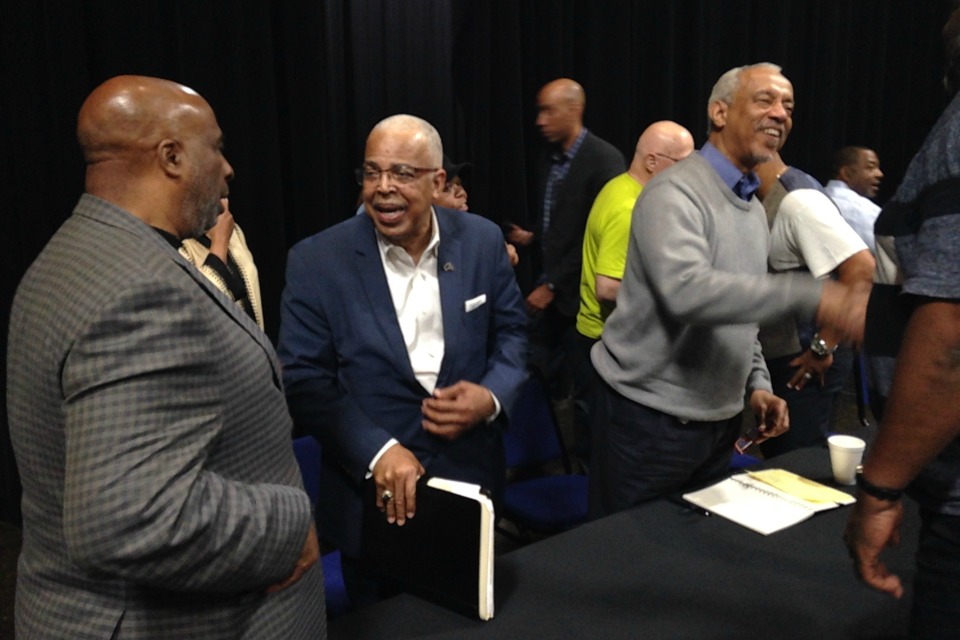 In the wake of recent community violence – the Gresham shooting of a mother and child, a fatal hate crime on public transportation, and a racist threat to the annual Good in the Hood event – Black community organizers and members came together last Wednesday morning in North Portland to rally around positive change.

“We’ve gone way too far,” said Tony Hopson, addressing the audience of around 200 at the headquarters of Self Enhancement, Inc., where he presides as CEO. At the heart of his message was a commitment to unity.

“When we’ve made strides historically, we’ve been unified in a common goal,” he said. “We’re here to take a stance and have a voice.”

Initiated by Hopson and Albina Head Start CEO Ron Herndon, the public forum was headed by a panel of some of Portland’s prominent Black leaders. Its intent was to draw Black men whose presence, according to organizers, has been missing.

“When you talk about voices around the violent issues that are happening, the Black men are not there in mass, there’s no unified effort,” Hopson told a group of reporters, which included The Skanner.

Wednesday’s meeting was about fortifying that effort.

“Realistically, there’s a lot of things that are better, but it’s not nearly as good as it ought to be,” Hopson said. He mentioned SEI’s success in boosting graduation rates for Black students, in the face of persistent unemployment and criminal activity. “We still have a long way to go… But I look at all of these Black men who care and have congregated here, it gives me energy.”

Ronnie Herndon, who moved to Portland in 1968 from Harlem, reflected on the socio-economic plight of Blacks at that time. Some 50 years on, he believes the core issues remain the same: unemployment and a lack of decent housing and education.

“But what’s important is that people still have the spirit to want to change,” said Herndon. “People are here to listen and their questions are about the next steps.”

Recent violence has been sent shockwaves through the Portland and Black neighborhoods in particular. “Our community is under siege,” said panelist Rev. Dr. LeRoy Haynes, Jr. of the Allen Temple and the Albina Ministerial Alliance.

He likened the resurgence of White supremacist activity to the civil rights movement of the 1960s.

“White supremacy will not win,” continued Haynes. “We are not going back. We will move forward.”

He also acknowledged the necessity of Portland’s police to be “community-oriented and willing to respect Black men and boys.”

C.T. Wells, pastor of Emmanuel Church, congratulated the efforts of the anti-gang organization Enough is Enough, as well as SEI for work in providing positive alternatives to youth violence.

But while addressing racial and gang violence was crucial to the conversation, organizers steered the focus on how to better housing – in particular, bringing Black families back to the neighborhoods from which they were ousted – alongside education and employment opportunities.

"We want to come up with specific steps to make it possible for those Black folks who were forced out – at least 5,000 Black folks – to come back to this community,” said Herndon.

The urgency to restore Jefferson High School ignited a passionate response from both panelists and audience members. "Renovate Jeff now!" repeated Herndon. In serious need of an upgrade, Jefferson in North Portland is Oregon’s only remaining majority-Black public high school, yet was left off the recent record-setting $790 million school bond.

Others in the audience came forward to encourage the public to engage in Black businesses, and in turn, for businesses to open their doors to young people seeking jobs.

Commissioner Loretta Smith spoke of the Multnomah County’s SummerWorks program, in partnership with Worksystems, which has provided some 650 permanent jobs for young people – the majority of which are low-income and youth of color.

“I have never seen a kid doing a drive-by on their way to work,” said Smith.

While the event’s organizers noted that community conversation is the first step to actionable change, Pastor Wells’ comment hit the message home with an uproarious applause: “If we don’t pay attention, we’re complicit in what’s going on.”