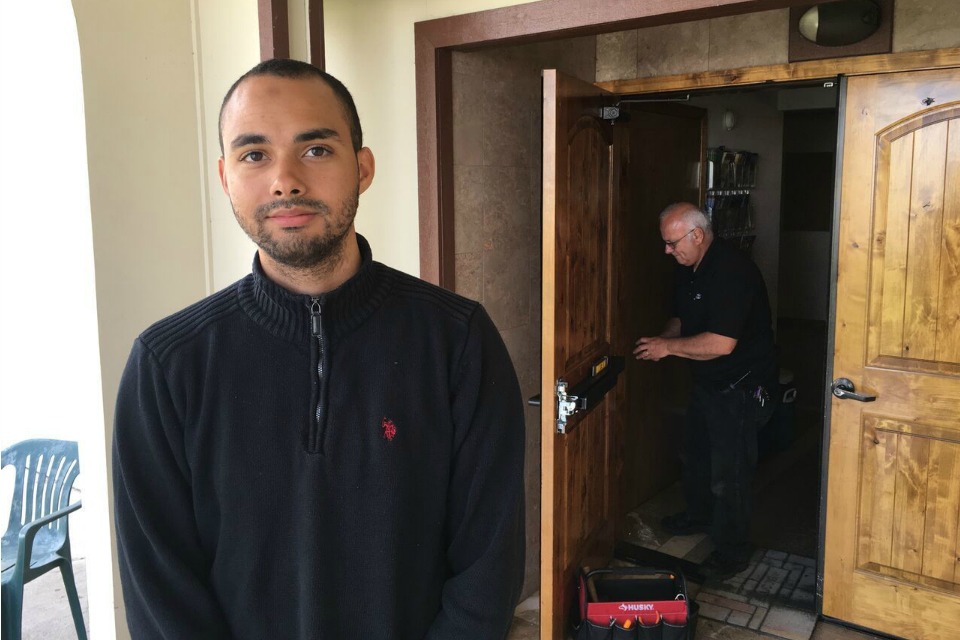 EUGENE, Ore. (AP) — Inside a mosque in the college town of Eugene, a half-dozen men prostrated themselves on a carpet while another man led the midday prayers. Over their melodic recitation came a tapping sound as a locksmith installed higher-grade locks on the front door.

The worshippers at the Eugene Islamic Center are worried about their security. A man recently appeared outside the mosque and threatened to kill Muslims.

Barely two weeks later, an assailant stabbed two men to death and wounded a third on a commuter train in Portland, 110 miles (180 kilometers) to the north. The victims were trying to protect two teenage girls, one of whom was wearing a hijab, as the man shouted anti-Islamic slurs.

Looking ahead, Muslim leaders and others are concerned about anti-Shariah, or Islamic law, marches planned for Saturday in Seattle and about two-dozen other U.S. cities, saying the marches are really anti-Muslim. They consider the incidents in Portland and Eugene, and other recent anti-Muslim crimes in America, part of an alarming trend that came to the forefront in last year's presidential election with far-right activists portraying Islam — and all Muslims — as a threat.

"Our Muslim community is feeling a tremendous amount of stress and pressure," said former Seattle Mayor Mike McGinn, who plans to attend a counter-rally Saturday. "It's important for local leaders to express solidarity and make clear we stand against bigotry, against racism and with our Muslim neighbors in the state and beyond."

The group organizing the rallies, ACT for America, has chapters around the country and says it is focused on fighting terrorism and promoting national security. It says it condemns bias against religious groups and is "proud to stand shoulder to shoulder with peaceful Western Muslims as well as peaceful Muslims worldwide."

Yet many Muslims and others say the group promotes a distorted and prejudiced view of Islam.

ACT for America activists portray Shariah as largely incompatible with American democracy and often warn of a stealth effort to replace U.S. law with Islamic law. Muslims call the claims ludicrous and say Islamic law plays a role similar to Jewish law, as a guide to religious life rooted in the Quran.

Aneelah Afzali, who heads a Seattle-area group that works against discrimination and hate crimes, said she will be putting up an "ask a Muslim booth" near Seattle's anti-Shariah rally, "so people can ask questions directly about Islam, and we can counter conspiracy theories, accusations and lies that come from that hate rally."

She said she has noticed increased hostility toward Muslims, evidenced by the destruction of a granite sign in front of the mosque she attends in Everett, Washington, by someone apparently wielding a sledgehammer. A temporary sign was destroyed a few weeks later.

"What was so beautiful was the outpouring of community support," she said, explaining that many community and business leaders showed up for a ceremony and left their handprints in the concrete base that holds the new sign.

Two far-right groups, the Oath Keepers and the Three Percenters, are to provide security at some of the rallies, apparently the first simultaneous anti-Shariah rallies in the U.S. Members of a third group also confirmed they'll attend, according to the Southern Poverty Law Center, which monitors hate groups.

"With the recruitment of anti-government groups and the Proud Boys, the potential for violence increases," the center said.

The marches come amid a rise in reports of anti-Muslim incidents in the U.S., including arson attacks and vandalism at mosques, harassment of women wearing Muslim head-coverings and bullying of Muslim schoolchildren.

"Things happen so fast, it's so hard to keep up," said Ibrahim Hooper, communications director for the Council on Islamic-American Relations.

Muslim leaders hear echoes of the views of groups like ACT for America in President Donald Trump's temporary ban on entry into the U.S. from six Muslim-majority countries — a measure currently blocked by federal courts — and in his claims of dangers posed by immigrants and Muslim refugees. Trump has said his policies are critical for protecting national security.

Those who attend the Eugene Islamic Center, in an off-white building in a lower-income neighborhood, are still coming to grips with the May 10 threat from a man who was arrested the next day while carrying a knife.

Mosque member Drew Williams said the man claimed to have killed Muslims while serving in the military in Iraq and told witnesses, "I have no problem killing you." The man was charged with intimidation, menacing and harassment.

"Many people are worried and saddened and very shocked, but we still hope to be able to practice and to be part of the Eugene community," Williams said as the locksmith worked next to him.

Besides installing stronger locks, the mosque is raising funds to erect a fence around the building and possibly hire a security guard for Friday prayers, when the number of worshippers peaks.