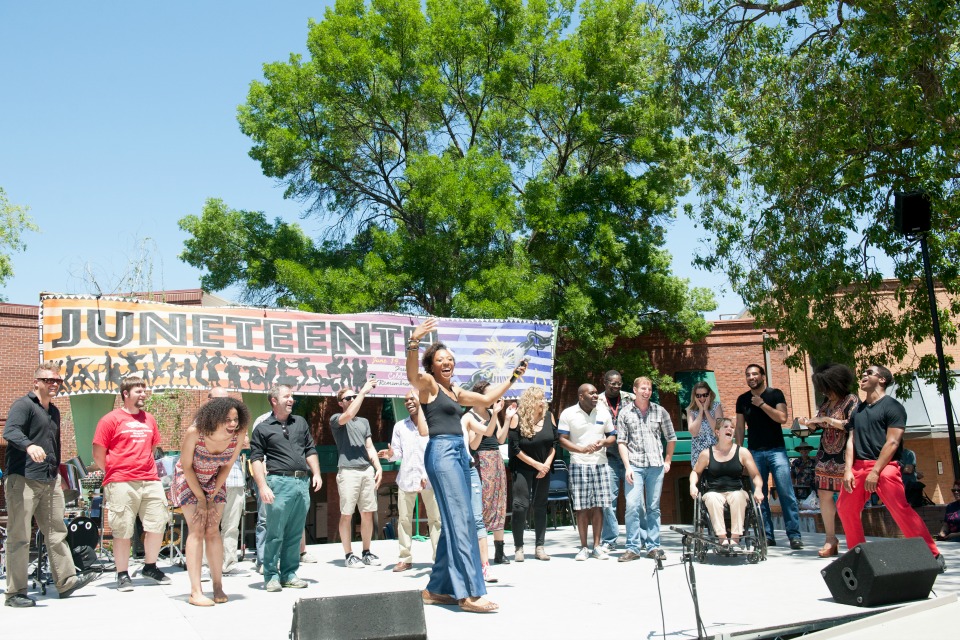 Ashland, Ore.— The Oregon Shakespeare Festival will host its annual Juneteenth celebration on Monday, June 19 at noon on the Courtyard Stage. The event is free, though donations will be accepted for the Juneteenth Scholarship Fund.

This year’s theme is “For Us, By Us.” The approximately hour-long program is a celebration of joy and resiliency as expressed through spoken word, dance, music, hip hop, visual art and theatre excerpts—including the sounds of local celebrity and the official DJ for the Oregon Ducks football and men's basketball teams, DJ Gemineye from 107.5 KISS-FM in Medford, Ore. and 104.7 KDUK in Eugene, Ore. ASL interpreters will be provided for the event.

Juneteenth is the oldest-known commemoration of the ending of slavery in the United States. On June 19, 1865, Major-General Gordon Granger led his Union soldiers into Galveston, Texas with the news that the Civil War had ended and that the enslaved were now free. This was 2½ years after President Lincoln’s Emancipation Proclamation became official January 1, 1863. Today, Juneteenth commemorates African-American freedom and emphasizes education and achievement. In cities across the country, people of all races, nationalities and religions come together to acknowledge a period that shaped our history and continues to influence our society.

The 2017 event is co-curated by members of the OSF company: Nemuna Ceesay, Roberta Inscho-Cox, JaMeeka Holloway-Burrell and Sam White.

“It’s been an incredible experience, collaborating with members of our OSF family in creating our Juneteenth event,” Ceesay said. “We couldn’t be more thrilled to share in such an important, yet relatively unknown, American holiday with our community, while raising funds to provide this once in a lifetime opportunity for students of color!"

OSF Community Producer Claudia Alick shared the urgency for the celebration this year. “It is important, now more than ever, for our community to explicitly reaffirm our values in the public,” Alick said. “We are anti-racist and pro-Black in Ashland, and we must state this loud, proud, and with joy.”

OSF has celebrated Juneteenth since 1998, when actor Aldo Billingslea, originally from Texas, hosted a fundraising barbecue to help African-American students attend the OSF Institute’s annual Summer Seminar for High School Juniors. The Juneteenth Scholarship Fund was created for that purpose.

This year’s hashtag is #OSFJuneteenth2017. Tag @osfashland and share what Juneteenth means to you and your photos and video from this year’s performance.

Founded by Angus Bowmer in 1935, the Oregon Shakespeare Festival (OSF) has grown from a three-day festival of two plays to a nationally renowned theatre arts organization that presents an eight-month season of up to 11 plays that include works by Shakespeare as well as a mix of classics, musicals, and world-premiere plays and musicals.

OSF’s play commissioning programs, which include American Revolutions: the United States History Cycle, have generated works that have been produced on Broadway, throughout the American regional theatre, and in high schools and community theatres across the country. The Festival draws attendance of more than 400,000 to approximately 800 performances every year and employs approximately 575 theatre professionals.