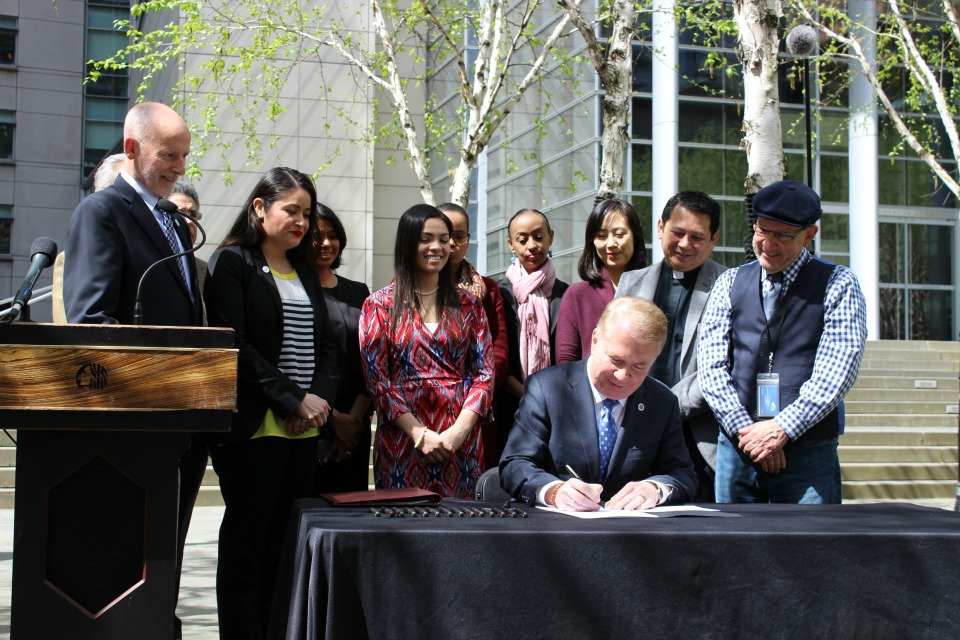 The measure was introduced in response to the Trump administration’s actions in its first 100 days against immigrants and refugees, which will likely increase the number of people in need of legal services in court.

“President Trump has spent his first 100 days attacking immigrants and refugees and threatening Constitutional cities like Seattle,” said Mayor Murray. “We have reinforced our values and our promise to be a welcoming city that embraces everyone who lives here. The legal defense fund will provide immigrants, who are increasingly and unfairly targeted by the Trump administration, with critical resources they need to ensure they have representation in court. It is one way Seattle is showing a better, progressive vision for America.”

“The scales of justice are out of balance when immigrants, and oftentimes children, appear alone in court without legal representation or any viable way to defend themselves, while the government has seasoned immigration attorneys working every single case,” said Councilmember González (Position 9, Citywide). “Everyone deserves access to legal aid, and this legislation will help make that a reality.”

“Seattle had an opportunity to strengthen our communities and we rose to that challenge,” said Councilmember Burgess (Position 8, Citywide). “Together, we’re providing a fighting chance for our immigrant neighbors, friends and families, and that’s good for all of us as Seattleites.”

The legal defense fund will be structured as contracts that eligible community-based organizations can apply for to hire immigration attorneys, legal staff, and services to aid immigrants who are detained, as well as those who are not detained but facing deportation and other complex cases. Unlike other courts, people in immigration proceedings do not have the right to a court-appointed attorney. The Office of Immigrant and Refugee Affairs will administer the program, which will become available this summer.

Recent incidents at SeaTac International Airport, where refugees and immigrants from several majority-Muslim countries were denied entry into the U.S., and the detainment of Daniel Ramirez-Medina, a young man who was brought to the U.S. as a child, highlight the need for legal assistance for people facing immigration proceedings initiated by the Trump administration.

In the first national study of access to counsel in immigration courts, the American Immigration Council found that immigrants who were represented in court were up to 10 times more likely to obtain relief than those without representation.