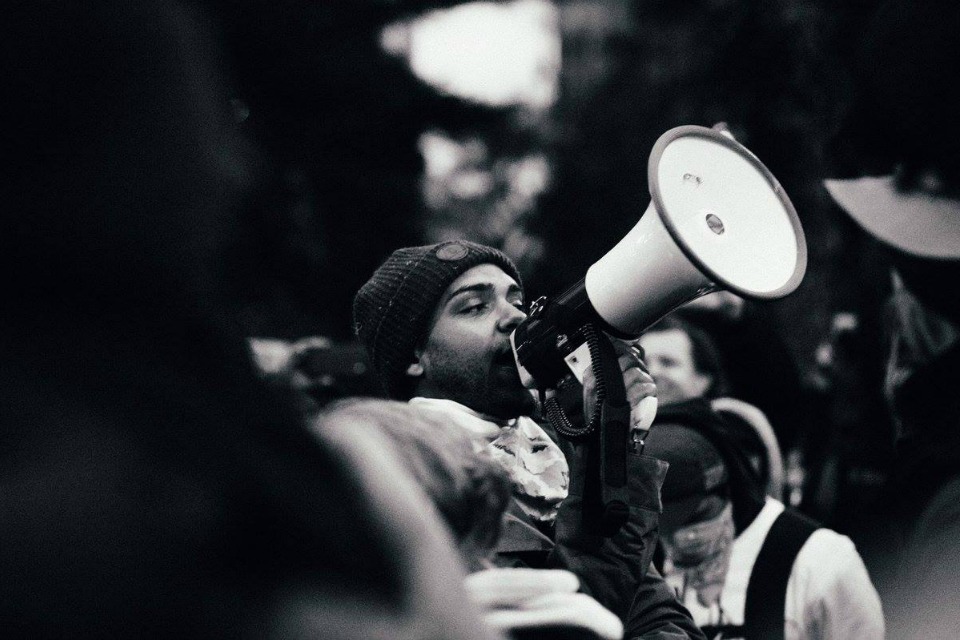 In the months following the presidential election, Portland has become a hotbed of protest and resistance which has largely decreed, “Trump is not my president.”

Through the galvanization of marches and masses – and $1 million worth of damage to downtown Portland – one group has emerged as the city’s largest activist movement: Portland’s Resistance.

One of its organizers is 24-year-old African American law student, Gregory McKelvey, who has become the charismatic face of Portland’s anti-Trump stance.

While the organization has garnered national attention for its wide-spread anti-Trump protests, the Portland native admits that the media has been more focused on its clashes with police, rather than the movement’s message. For McKelvey, that can sometimes be detrimental to the cause.

“For anybody that comes to our events , they get a different feel for things than from the media story,” McKelvey explained to The Skanner. “I’m not going to go to a protest and tell the followers of Portland’s Resistance to intervene with anybody’s action, because that’s not our job. But what we can do is set a peaceful example, and I think we’ve done a good job in doing that.”

In a gesture to separate itself from violent  protest, the resistance is raising money to help repair Portland’s vandalized property.

Having formed “in order to survive a Trump presidency, the rise of White nationalism and the widening income inequality” Portland’s Resistance is striving to connect people to local politics, progressive causes and community development.

It’s why the group has partnered with art and activism group, Know Your City, to ignite a new program called Resistance Talks in an effort to make sense of a nation divided.

“One thing that has seemed to create a lot of conversations and changed peoples’ perception of community is the general election,” said Cameron Whitten, executive director of Know Your City.

Beginning in March, the monthly series of talks will cover pressing social justice issues to inspire critical thinking and call the community to action.

The first talk, ‘The Rise of Corporate Rule,’ will hash out how the financial establishment has attained new positions to influence public policy. “There are a lot of examples of work that’s happening here where people are seeing undue influence of corporation. That talk is really going to be locally focused,” said Whitten.

Speakers will include People’s Co-op, to discuss how co-ops can help maintain a local economy; Portland Tenants United, which will address renters’ plight in the face of real estate interests; and Direct Action Alliance, the people of color anti-fascism organization, will talk about divestment on a city level. Rounding out the roster is XRAY FM, which will speak on independent media as a conduit for local voices.

“I think one of the main things Portland’s Resistance can do in this partnership is amplify the message,” said McKelvey. “It’s going to be all for nothing if all we do is protest. So we need to funnel some of the people we have going to protests into workshops and events, such as the Resistance Talks.”

Next month’s talk will focus on the First Amendment, attacks against the press, freedom of assembly, and police use of excessive force.

McKelvey added that issues surrounding criminal justice reform, the housing crisis and climate change will likely be included in future Resistance Talks, stressing their importance on a regional level. “Above everything, it’s going to be important for cities to pick up the slack on stuff that the federal government can’t be trusted to do right now.”

The end game, naturally, is to ignite change.

“That’s the reason why we’re uplifting a diversity of organizations,” said Whitten. “We encourage everybody to organize in their community. And by being able to meet these leaders and connect with them after the talk, it gives people an opportunity to do something more.”

The first of the Resistance Talks will take place on March 24 at People’s Co-op. RSVP is requested early, due to limited space.