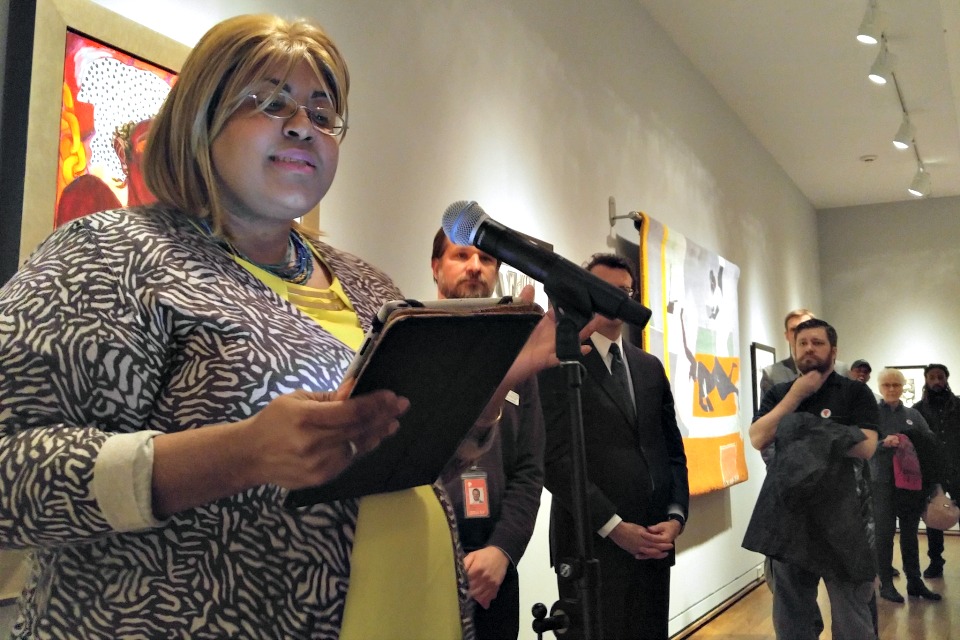 When Trayvon Martin was killed, Monica Montgomery was working as a preschool teacher in Washington, D.C. Suddenly she found herself fielding kids’ questions about whether it was bad to eat Skittles or wear hooded sweatshirts.

“It made my community feel very unsafe,” Montgomery said.

She started to create curricula around community care that imparted the Black Lives Matter message to children. Soon after, she said, she was fired.

She started the Museum of Impact, which she describes as the world’s first mobile social justice museum. It’s mobile partly because she can’t afford a brick and mortar space in New York City, where she lives and works, but also because she wants to “hit people at all levels of society” – from established museums to church basements.

Montgomery is working with the Portland Art Museum on a series of community projects in conjunction with “Constructing Identity,” an exhibition of African American art that opened at the museum Jan. 28 that will remain on display through June 18. That includes community discussions, talks by local artists, collaborative events with local schools and a project wherein local artists will create work responding to the collection – and that work will be displayed later in the spring.

The Pettrucci Family Foundation loaned its collection of African American art to the museum, and according to Michael Murawski, director of education and public programs for the Portland Art Museum, this is the largest exhibition from the Pettrucci collection ever publicly displayed. Works in the exhibit date back more than 130 years, and include creations by Black artists from all over the country, including several works by African American artists local to the Pacific Northwest, including Portland painter Arvie Smith.

Smith was not able to make it to a community reception held Jan. 28 for the exhibit’s opening, but his wife, Julie Kern Smith, addressed the crowd of more than 100 people briefly on his behalf.

“Portland needs more visibility for Black art and Black culture,” Kern Smith said. “More than ever, we need to celebrate our differences.”

In remarks to the crowd and in a brief interview with The Skanner, Murawski said the exhibit and attendant events reflect an emphasis that the museum should belong and respond to the community.

“This is a public institution. You are here because this is your museum,” Murawski told the crowd.

In addition to engaging local artists to create responsive works, the museum is planning an artist panel discussion Feb. 11 engaging artists whose works are on display in the exhibit. The Museum of Impact is working with Don’t Shoot Portland to engage more local artists, and Hana Layson, the Portland Art Museum’s school and teacher programs specialist, said she’s working with local schools on response projects, including a planned display of student art later in the spring.

Murawski said planning for community projects and partnerships is still in progress, and community members are encouraged to not just view the art, but reach out with ideas for collaboration.

“One of our goals is to empower community members to direct what’s here,” Murawski said. “As ideas come up for projects, we’ll make it happen.”