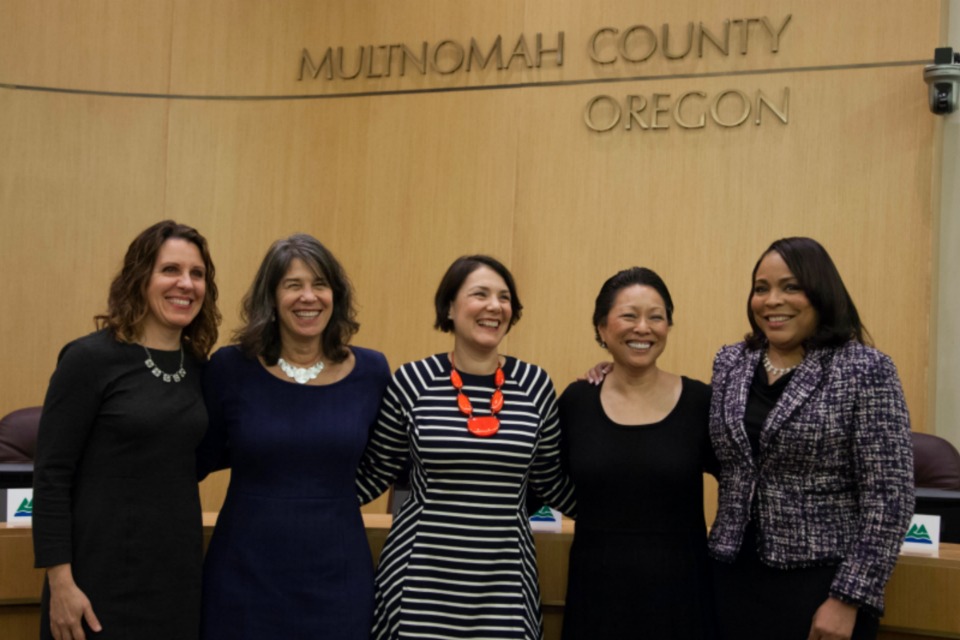 Tuesday marked a milestone for Multnomah County with the swearing-in of three new commissioners to its county board. For the first time in the county’s history, the board is comprised of all women, with the majority of its members being people of color.

The board is rounded out by African American Commissioner Loretta Smith of District 2, who has held her position since 2010, and County Chair Deborah Kafoury.

“District 3 is really at the heart of Multnomah County,” Jessica Vega Pederson told The Skanner shortly after being sworn in. Pederson’s diverse district encompasses the western edge of Portland’s Laurelhurst neighborhood, south along the city’s thoroughfare Cesar Chavez Boulevard, and  East at 148th Avenue. “I think being a woman of color and representing my district is a really good fit.”

Pederson, who lives in East Portland with her family, said her primary goals include, “making sure that we’re serving all people of Multnomah County in a way that is equitable and allows access to prosperity.”

She also added that the variety of perspectives and backgrounds of the commissioners will likely prove to be the strength of the board. Hailing from the typically male-dominated technology sector, Pederson said entering politics marked a transition into working alongside empowered women.

“I think it’s fantastic that Oregon is really leading the way in progressive government that has women in leadership positions, and is especially supportive of people of color in office,” she said.

Looking towards a new year, the board is united in its efforts to make mental health care a top priority. According to Commissioner Sharon Meieran, an emergency physician, addressing the widely cast net of mental health issues means fixing holes in homelessness, addiction and the criminal justice system.

“We have great people providing excellent services, but our system isn’t working for those who need it the most, those who are most vulnerable,” said Commissioner Meieran, who noted that working with all women presents a new opportunity for her. “We need to look at the system holistically and see where we can create a meaningful impact.”

But moving beyond the board’s individual members, Commissioner Pederson is relying on their collective values to serve the people best.

“We are progressive and we know Multnomah County can be a positive solution to tackle the big problems that we have, like homelessness, affordable housing, and better access to mental health services,” said Pederson. “I think those things reflect what all the people of Multnomah County want, regardless of ethnicity and gender.”