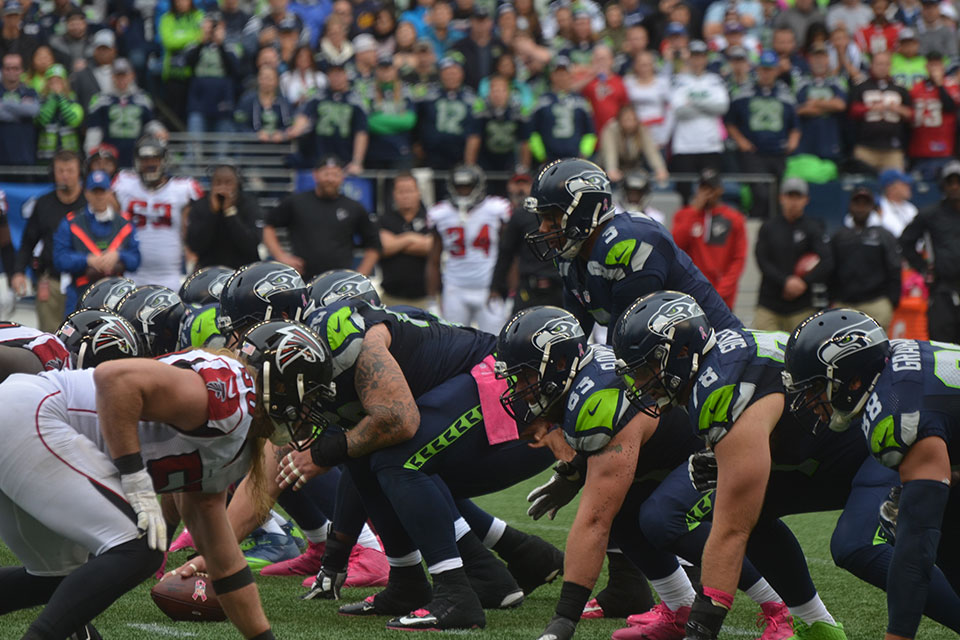 Another nail biting, come-from-behind victory for the Seattle Seahawks Sunday, Oct. 16, 2016 as they battled the Atlanta Falcons at CenturyLink Field up until the very end of the fourth quarter. While the first half of the game was dominated by the Seahawks, the second half belonged to the Falcons.

The Seahawks, donned in pink and blue for Breast Cancer Awareness Month, looked like they may not win this one at home but as they have shown, they don’t give up even when Atlanta top-ranked offense racked up 21 third quarter consecutive points. Running back Christine Michael scored on a 2-yard touchdown run and trailing 24-23 with 4:47 left in the fourth quarter, Steven Hauschka’s kick was blocked for the game-tying extra point and the ball was back in Atlanta’s possession. Falcons quarterback Matt Ryan’s pass, intended for receiver Julio Jones, bounced off his hands and was tipped by cornerback Richard Sherman, then intercepted by safety Earl Thomas midfield and the Hawks were down by a point with 3:48 left in the game. Seattle marched 24 yards and Wilson connected with running back Alex Collins for a 9-yard completion and Hauschka, after missing a 29-yard field goal earlier from a bad snap, went on to kick the game-winning 44-yard field goal with !:57 remaining in the game.

“I was doing my part, just trying to make myself available,” Collins said.”I feel honored my coaches and teammates trust me enough to be out there at this time in the game.”

The Hawks offense started off with a 9-yard touchdown run by Michael with 2:02 left in the first quarter taking a 7-0 lead and rookie Alex Collins scored his first NFL touchdown on a 2-yard touchdown run early in the 2nd quarter. Seattle lead 17-3 going into the half and the defense held the Falcons to just 52 rushing yards in the first half and forced two turnovers, holding Ryan to just 83 passing yards and sacking him three times.

"These wins are hard to come by and we just gotta keep pushing,” tight end Jimmy Graham said after the game. “This is a big win for us, that’s a good team over there,my hat’s off to them.”

“They kind of changed the game plan, they tried to slow us down up front by play action and different things so they could have more time to go deep but once we got the feel for what they were trying to do we made some adjustments and made some plays when we needed them," defensive end Cliff Avril said of Atlanta’s third quarter run in the game. Avril finished the game with two sacks and as he has committed, the number of sacks he gets each game he will build homes for the people in Haiti.

Wilson finished 25 of 37 for 270 yards, pulled out his 20th career fourth quarter or overtime comeback and is now the fastest player in NFL history to reach 50 wins in his five-year career, with a 50-19 record. Having started every game played with 79 (69 regular and 10 postseason) Wilson continues to prove he just keeps getting better with time.

The Seahawks are now 4-1 and will face the division rivals Arizona Cardinals on Sunday Night Football.