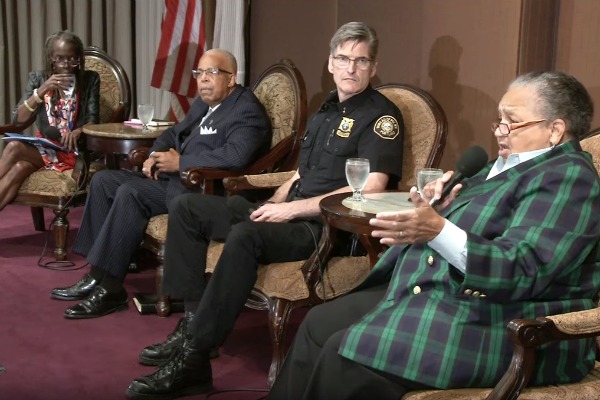 Police accountability has been the topic of numerous conversations in recent weeks, as many factors are poised to change the landscape in Portland.

Proposals to change the Citizen Review Committee and Community Oversight Advisory Board, looming Department of Justice deadlines and the change from Mayor Charlie Hales to Mayor-elect Ted Wheeler -- could all potentially shift police accountability processes.

At city hall, Mayor Hales and Commissioners Amanda Fritz and Steve Novick tabled discussion on a proposal to merge the Citizen Review Committee into the Police Review Board.

The decision came after a combative late-evening council meeting where stakeholders asked the council to hold off making the decision.

Bethel expressed “serious concerns” about the proposal to remove public meetings in the new accountability system -- a concern that was echoed by nearly every person offering testimony that evening.

In addition to the AMA, members from Portland Copwatch, the National Lawyers Guild, the ACLU of Oregon and the Oregon League of Women Voters voiced opposition to the proposal in its current form.

Community members also objected to a plan for the CRC to form smaller work groups. Dan Handelman of Portland Copwatch said there will be diversity issues under the new proposal. The current CRC configuration has been constructed to balance gender and racial representation -- which he believes would be lost in a smaller group.

“Breaking the 11-member panel into three-person panels will create a number of problems,” Handelman said. He suggested expanding the number of members and bringing in more Police Review Board panelists to round out a seven-member group.

Portland Auditor Mary Hull Caballero said the changes to the CRC were in response to the DOJ recommendation to reduce the rate of dismissals, investigate more cases and to resolve appeals within 21 days.

Hull Caballero said appeals haven’t been resolved in that time frame, and the problem is getting worse: “We are experiencing an increase in appeal requests, and the current backlog extends to next June,” she said.

Hales and Fritz expressed hope that the community and city could come to consensus on the key issues outlined. Hales called for a stakeholder group to form and the session was adjourned.

When Saadat was asked what the biggest challenge was when she worked with the Community Oversight Advisory Board, she immediately responded: “institutional barriers.”

“We are working with several bureaucracies all of which have their own set of policies, their own individual goals,” Saadat said, adding that none of the current systems have a good way of incorporating community input.

Haynes said his ideal police accountability system would empower community members with the ability to subpoena officers involved in excessive and deadly force cases and compel testimony. Haynes said that “trust is a two-way street,” where community members trust police to treat them fairly and without racial bias.

“If you are really going to be able to develop trust in the community, being able to hold officers accountable for the excessive force and deadly force is critically important,” Haynes said.

Marshman spoke optimistically about a cultural shift around police reform. He said that he believes the time for reform and community engagement is now -- but not everyone in law enforcement agrees with him.

Marshman spoke of changing internal police culture and efforts to educate the police force on racial discrimination and racial bias. He said the wording of the DOJ agreement is nearly perfect, and that it was up to the city to implement it. Marshman said the city, police bureau and community groups were in uncharted territory as they work through the agreement.

Additionally, the city of Portland may be removing the 48-hour rule that allows police officers 48 hours before answering questions on use of force.

As first reported in The Oregonian, there is a tentative contract deal between the Portland Police Union and the city to drop the controversial rule. In exchange the city would raise the pay of officers three percent per year for three years in addition to cost of living increases.

It is estimated to cost $6.8 million a year. The deal would need to be approved by the Portland Police Association and put to city council vote on September 28.