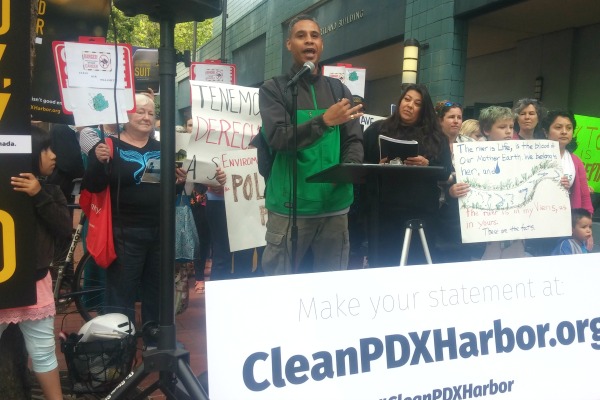 A diverse coalition of community organizations have come out in opposition of the proposed Environmental Protection Agency plan to clean the Portland Harbor Mega Superfund site. The Portland Harbor Community Coalition is pushing for a more aggressive clean-up plan and more time for public comment.

The superfund site is a 10-mile stretch of the Willamette River from the Broadway Bridge to Kelly Point Park. Water and sediment in these areas has been contaminated with hazardous substances accumulated over a century of industrial use.

The EPA has listed 64 contaminants of concern at the Portland Harbor that pose a risk for human health. These contaminants include cancer-causing polychlorinated biphenyls (PCBs), toxic chemical byproducts dioxins and furans, the banned pesticide DDT, arsenic and mercury.

Justin Buri, an organizer with the Portland Harbor Community Coalition, said most Portlanders do not realize just how toxic the superfund site is.

All of the EPA plans make use of four techniques to clean up the Portland Harbor: removing the hazardous material by dredging, capping over the contaminated sediment and monitored and enhanced natural recovery where new sediment covers the contaminated areas.

EPA’s proposed plan, called Alternative I, relies mostly on monitored natural recovery for 1,876 of the nearly 2,200 acres of the site.The plans calls for 150 acres to be dredged, 17 acres to be dredged then capped and 64 acres to be capped with a confining layer of plastic or other material.

The table below shows some of the other cleanup alternatives from the EPA. (Photo from the EPA superfund proposed plan document.) 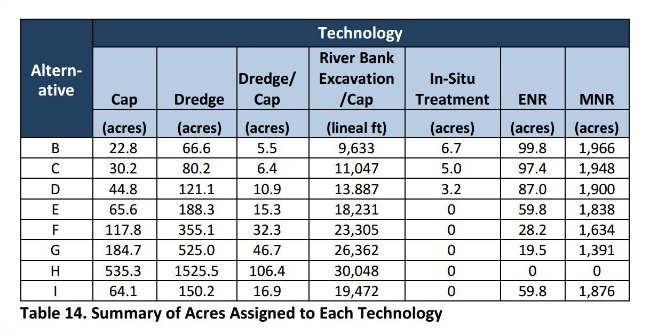 Alternative I would take seven years of in-river construction work and the monitored natural recovery, would occur over the next 23 years. The cost for cleaning up the mega superfund site would be $746 million.

The cleanup costs would be split between over 150 potentially responsible parties; local organizations like NW Natural Gas, the City of Portland and the Port of Portland and multinational companies Exxon-Mobile and Shell Oil. A full list of can be found here.

“We think it strikes the right balance of all the different factors to consider, it’s a remedy that is we believe protective of human health and the environment,” Grandinetti said.

But Buri says the proposed plan is insufficient to deal with the toxic contaminants and relies too heavily on natural processes to clean the river.

“The scariest thing is that, what they refer to as Monitored Natural Recovery, the principle element of what’s in the plan, and that is nothing more that do-nothing and take samples and see what happens,” Buri said.

Grandinetti says that the most polluted sections of the superfund site will be dredged but the areas with low concentrations of contaminants would not.

“We have a lot of confidence that (Monitored Natural Recovery) can work -- the question is to what extent do we rely on that and that’s something that we want the public to weigh in on,” Grandinetti said.

These communities have special relationships with the Willamette River say advocates; from the houseless communities that live by the river to the Native American communities who fish in the river.

Rahsaan Muhamed of Groundwork Portland said the Black community in Portland has been greatly affected by pollution and development. He said the history that can be traced back to Vanport, where pollution and people were dispersed by the 1948 flood.

“The displacement, going all the way back to Vanport, of Black and Brown and original people,” Muhamed said. “That move that caused us to migrate down from Vanport into the North and Northeast Portland areas, we were victims of the pollution from the beginning.”

Both Muhamed and Buri see the cleanup as an opportunity for equity and community building. Muhamed wants to see a pre-apprenticeship program to come from the millions of dollars of cleanup money -- a program that would develop a workforce for the construction work and stewardship for the future life of the river.

“We can set up the training to train Black and Brown and original peoples to not only clean up the river but to establish institutions of education based on water usage, and water purification,” he said.

Grandinetti said that people who are interested in jobs related to the cleanup should look at the EPA Superfund Job Training Initiative to become good candidates trained to deal with toxic and hazardous materials.

Both the EPA and the coalition ask for people to weigh in and make public comments on the plans. Grandinetti asks that people visit the EPA’s Portland Harbor project page to look at the proposals. Public comments can be made at www.cleanupportlandharbor.org or through the EPA’s public comment page. The 90-day period for public comments will end on September 6.

Buri says that the time to act is now because superfund sites are evaluated 30 years after the work was first done.

“Once the plan is adopted, you pretty much have to wait another 30 years in order to see if we’ve done enough, Buri said. “That’s too long of a time for communities that have been suffering the impacts of what the pollution has brought over the last 100 years.”