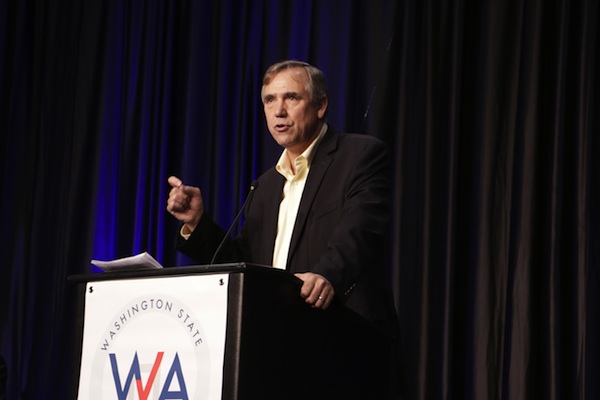 During several hours of speeches, about 200 people lobbied for a spot at the convention in Philadelphia in July. Sixty-seven delegates previously were elected at the party's May congressional caucuses.

The delegate selection was a formality. Presidential candidates are awarded delegates proportional to their finish at the Democratic caucuses in March.

Bernie Sanders, who won the caucuses, will have 74 delegates from Washington state at the national convention. Hillary Clinton, the presumptive nominee, will have 27. In addition, 17 superdelegates, most of whom have already pledged their support to Clinton, will represent the state at the convention.

State convention delegates passed their party platform on Saturday and voted on various party charter amendments and resolutions. One resolution had the state party officially endorse Sanders, and the conference room broke into loud cheers after the vote. Party officials said before the vote that the motion was symbolic.

Another resolution that would have had the party officially endorse both Sanders and Clinton failed.

U.S. Sen. Jeff Merkley of Oregon, the lone Democratic senator to have endorsed Sanders, told the gathering Saturday that the party must unite behind Clinton to defeat presumptive Republican presidential nominee Donald Trump.

His remarks were met with boos from Sanders supporters, mixed with cheers from the smaller Clinton camp.