PFLAG Black Chapter to Show “Holler if You Hear Me” 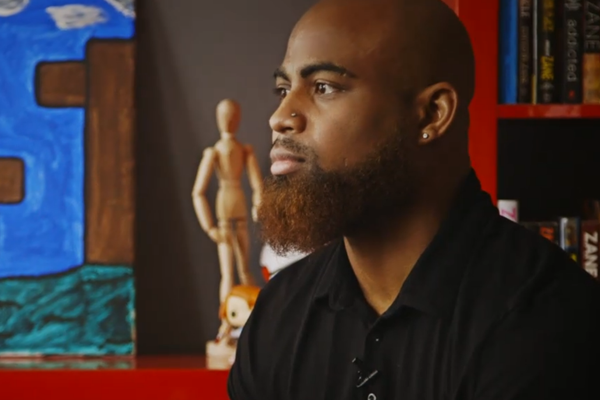 Tonyka wants her mother to come to her wedding, but she knows her mother won’t arrive. They love each other, but Sharolyn says she can’t support her daughter’s union.

Both are driven to tears over this rift in the family. Tonyka is a lesbian who is marrying her partner, a woman named Jonita, and Sharolyn is a Christian woman who believes homosexuality is wrong.

Tonyka’s story and others are told in the Black Entertainment Television documentary “Holler if You Hear me,” which explores the sometimes difficult relationship that exists for Black queer folk and their faith communities. PFLAG Portland Black Chapter will host a screening of the film from 6 to 8:30 p.m. Saturday at First AME Zion Church in North Portland.

This free screening will be followed by a discussion panel featuring the Rev. Cedric A. Harmon, the executive director of Many Voices, a Washington, D.C.-based nonprofit focusing on the Black church and LGBTQ justice.

Khalil Edwards, the PFLAG Portland Black Chapter coordinator, said the film screening is needed to bring about discussion and outreach between faith leaders and the queer community.

“We know that the relationship that the Black, lesbian and gay, bisexual, transgender and queer community have with our faith community is one that comes with different challenges,” Edwards said.

Edwards noted many of these challenges came to light when PFLAG Black Chapter partnered with the Urban League of Portland to research the Lift Every Voice report in 2012. The report focused on the experiences of Black queer residents in Oregon.

Many focus groups were held to research the report. These groups spent a lot of time talking about questions of faith, and participants said queer people did not feel fully accepted in their faith communities. People felt pushed out, ignored and they had to endure slurs, Edwards said.

This prompted PFLAG to start their faith outreach program to work with religious communities to be more accepting of LGBTQ parishioners.

“Holler” shows a number of LGBTQ youth who are alienated from both their families and their family churches. All the youth featured in the movie describe themselves as being Christians, but they struggle with finding a safe place to practice and be affirmed. Many hide in plain sight as part of the music ministry, but are unable to be true to themselves.

They describe being bullied by family members for not conforming to strict gender roles, being kicked out of their homes and having frequent thoughts of suicide.

Hannah, a lesbian portrayed in the film, said that she pretended to be straight to please her mother and to have a safe place to sleep at night -- but she couldn’t keep up with the façade.

“Two years ago, I was engaged. I was not in love with this dude at all,” she said. “It was horrible. I actually felt like I was a prostitute.”

The documentary also highlighted an affirming faith community, The Vision Church, in Atlanta. This church, headed by Bishop O.C. Allen III, is part of a national fellowship of Black churches that welcome LGBTQ people.

Pastor Steven Sawyer was part of The Vision Church, and will be on the discussion panel at the film screening. Sawyer told The Skanner News that the Black church will often accept queer believers -- as long as they hide their sexual orientations.

“One of the biggest things we struggle with, especially with the African American church in general, is ‘don't ask, don't tell,’” Sawyer said. “It's that notion that this can be a loving place for you, but if you just don't tell us anything.”

Edwards said this attitude has been changing through faith outreach. He said there are a number of fully-affirming churches in the area such as Ainsworth United Church of Christ,  First AME Zion  and St. Philip the Deacon Episcopal. He said these churches have gone through an intentional process to become welcoming to the LGBTQ community.

He also said there was LGBTQ-affirming work being done by Bethel AME, Vancouver Avenue First Baptist  and the Straightway Services community organization. Pastor Sawyer has moved his ministry to Tacoma, Wash., at the welcoming Living Water International Church.

Edwards sees this outreach as helping the LGBTQ community and also working to debunk racist assumptions about homophobia in the Black faith community.

“The community is not a monolith,” he said. “There are folks of faith, Black faith leaders that are not only open to this conversation but folks that are fully accepting.”