Mayoral Candidates Sound Off on Justice 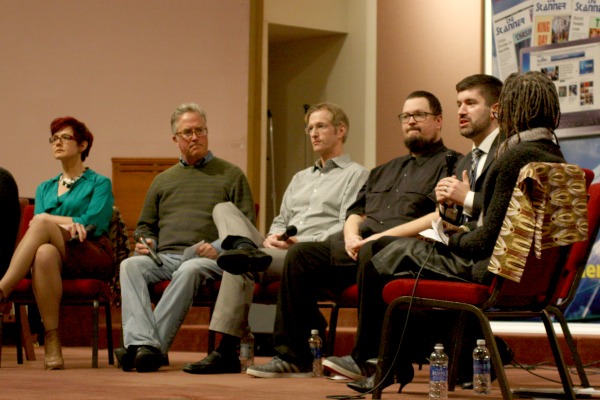 The City of Portland is at a precipice of livability: skyrocketing rents turn families out into the street, Black people experience disproportionate representation at every step of the criminal justice system and those with mental illness risk mistreatment and death at the hands of the police.

Portland’s city slogan is “the city that works” -- but the larger question is “for whom does it work?”

This question was at the heart of the mayoral candidate forum for social justice held March 10 at Maranatha Church. Ted Wheeler, Jules Bailey and Sarah Iannarone squared off on the issues of police accountability, homelessness, mental illness and economic equity.

The Skanner News was among the sponsors of the event, along with the NAACP, the Mental Health Association of Portland, In Other Words, Street Roots and others. A racially diverse crowd of more than 200 people attended the event.

A related controversy preceded the discussion itself. Instead of having an open forum for all 15 candidates who’ve filed for candidacy, only the three best-funded candidates – those who had raised $5,000 or more by March 8 -- were invited to speak at the event. Moderator Jason Renaud, co-founder of the Mental Health Association of Portland, said the format was necessary to bring about an in-depth discussion.

“We are not having an open debate and big panel, we are trying to have a quiet discussion - our issues are quiet and our issues are fragile,” Renaud said.

The decision caused tension in the activist community, with some pointing out the irony of restricting participation in a social justice forum based on who had enough money to speak. Other mayoral candidates Dave Schor, Steven J. Entwisle Sr., Deborah Harris and Jessie Sponberg sat in the front row and protested their exclusion – silently for the most part, though Entwisle and Sponberg each interjected once during the discussion.

The forum was moderated by Renaud, Jo Ann Hardesty of the Portland NAACP and Israel Bayer the executive director of Street Roots.

Wheeler framed many of his answers around problem solving; from himself, from city government officials, even advocating for the police to be community problem solvers. Wheeler described himself as the “jerk” that Portland needs.

“You need to elect somebody who's a bit of a jerk,” Wheeler said in reference to a question about homelessness and the housing crisis. “I'm just the guy for the job,” Wheeler said.

Bailey presented himself as both the everyman who empathized with the plight of Portlanders and a policy wonk who knows the rules of local government. Bailey took heat for his recent Portland Police Association endorsement and his answer to reform the Portland police by adding more officers.

Bailey defended his PPA endorsement and said it would not affect his ability to lead the Portland Police Bureau as the Police Commissioner.

“I am honored to have that endorsement,” Bailey said. “But that doesn't mean that I can't be a mayor who's willing to have tough conversations and hold people accountable.”

Both Iannarone and Wheeler took a tougher reform stance in their answers on police accountability. They both pointed to the “having enough police matters” billboard erected by the PPA as being inflammatory and insulting.

Wheeler and Iannarone were also quick to criticize the 48-hour rule in the PPA contract. This provision allows officers 48 hours before they have to answer questions in deadly force incidents.

Bailey struggled to provide a clear answer on his stance on the 48-hour rule. In a lengthy back-and-forth exchange with Hardesty, he said he would make an effort to slowly move away from the rule. When pressed by Hardesty, Bailey wouldn’t unequivocally commit to removing the rule.

Throughout the debate, Iannarone had some of the strongest criticisms of Portland’s “progressive” culture, which leads in some areas but consistently fails its most vulnerable residents. In her opening statement, she took on the idea of Portland as a livable city and pushed for greater human rights progress.

When asked how she would address the disproportionate treatment of Black residents in the criminal justice system, Iannarone called for a prioritized effort to address racism and curb implicit biases.

“You can't begin to address those (disparities) unless you start calling that for what it is, which is racism. ‘Hi, we're Portland, we're racist. Hello, we've got a lot of work to do.’ We have to have the courage to say that,” she said. Iannarone said Portland could truly earn its progressive reputation by pushing to be the number one human rights city in the world.

As Hardesty gave her closing remarks, she reminded the candidates that all of the moderators are lifelong advocates who will hold them accountable to the promises made that night.

“I will work with you to help you be successful, but I will be your biggest pain if I believe you are not working,” Hardesty said.

For more information read the candidate position summary from the forum.