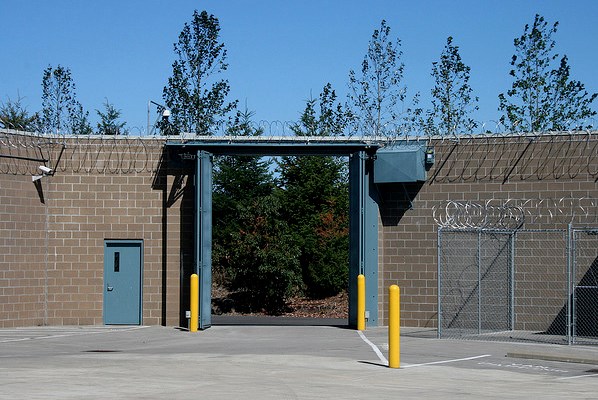 Amid this week’s freezing weather, a debate heated up about using Wapato Jail as a homeless shelter.

On Thanksgiving day of last year, homeless advocate Jeff Woodward submitted a Change.org petition petition to open the never-used Wapato facility. Nearly six weeks later, the petition has been signed by more than 1,700 people, and has sparked discussion among county officials, business leaders and non-profit organizations.

Woodward’s vision for the Wapato facility is to address both the temporary need to shelter the homeless, and to foster treatment of roots causes of homelessness -- such as mental illness, substance addiction and community disconnection.

“The idea behind Wapato is that people aren't going to leave until they are set up for success,” he said.

In 1996, voters approved a bond measure to finance the construction of the jail and simultaneously passed a tax-limiting measure that cut off the funds needed to operate the facility. Multnomah County owns the 189,670-square-foot, 525-bed jail that has never housed a single inmate.

The facility cost over $58 million dollars to build and requires $300,000 a year to maintain since it was completed in 2004. Since then it has found some use as a filming location for TV shows like “Grimm,” “Leverage” and “Portlandia,” as well as commercials and documentaries.

Multnomah County has also been trying to sell the property. In June of 2014, the county collected seven proposals to repurpose the facility. The proposals included a community garden with a rehabilitation facility, a film production house and a commercial prison for high-profile criminals.

Woodward would like to see Wapato emulate other prisons that have turned into shelters like Grace Marketplace in Gainesville Florida and Fort Lyons in Colorado.

Critics say the plan will isolate and warehouse vulnerable people away from the city center and necessary services. Other critics say Wapato is being touted as a silver bullet solution that pushes the homeless out of public view and keeps camps out of neighborhoods.

In November, Multnomah County released its official assessment of the use of Wapato as a homeless shelter. The letter from County Chair Deborah Kafoury, addressed to the Home for Everyone Executive Committee, said Wapato was not a viable option.

The reasons include a bond condition that Wapato can’t be sold to a non-governmental agency while the bonds are being paid off. The county stated operational costs to get the facility ready for use could cost $ 5 million, and more money would be needed to run Wapato as a shelter.

Wapato would also need to be zoned for a shelter and changes made to the city’s transportation plan. Accessibility is an issue as well. The closest bus line to Wapato stops three-fourths of a mile away and doesn’t run on weekends.

“Certainly there are issues, but I don't believe there are any that cannot be overcome,” Woodward said. “They only see things for what they are. They don't see them for what they could be.”

Instead of having the homeless navigate multiple support agencies, Woodward thinks Wapato should provide full services such as meals, job training, clothing, and addiction support meetings.

There has been growing support for Wapato as a homeless shelter. On Dec. 8, the Portland Business Alliance President and CEO Sandra McDonough sent a letter to Deborah Kafoury, urging the county to start a pilot project to use a portion of Wapato as a shelter.

On Jan. 1, the Oregonian Editorial Board endorsed the use of Wapato as a temporary shelter. The board stated that the city of Portland’s homeless state of emergency necessitated creative solutions from decision makers.

Woodward said opening Wapato would require systemic changes to how money is being spent on the homeless in Portland. He said local governments spend up to $40,000 per year for each homeless person, but those efforts go towards short-term stop-gap efforts like the Sears Armory shelter which will operate for 6 months and then close.

He hopes the petition, endorsements and discussion will encourage Multnomah County to hold a public forum on using Wapato.

Woodward sees a deep irony that the facility is vacant while tent camps are popping up throughout the city, and the Oregon Department of Transportation runs sweeps to upend the homeless.

He sees it as a matter of life and death. The Multnomah County Coroner recorded 56 deaths of the homeless in 2014, more than one death every week.

“How much is a life worth?” Woodward asked. “Since Wapato was available to be used as a poor shelter, over 500 homeless people have died in Multnomah County. That’s almost the same number of beds available at Wapato.”