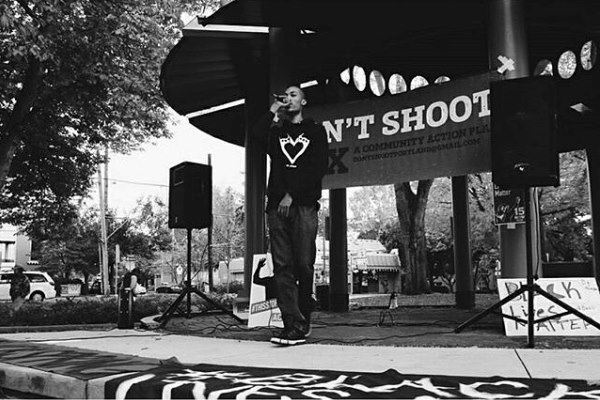 Since releasing his debut project, “NorthBound,” two years ago, Portland rapper Glenn Waco has built quite a name for himself. In those two years Waco, whose real name is Loren Ware, has become a staple in the burgeoning local hip hop scene, as well as emerging as one of the prominent voices in the  Don’t Shoot PDX movement in the past year.

The Skanner caught up with Waco just days before his departure from town, to find out more about why he decided to cross state lines and discuss his vision for the future.

And  though he has yet to set a return date, Waco is promising that, whatever he gains in the Golden State, he will  bring back home to the Rose City.

The Skanner News: This is the most generic question, but tell us why you’re leaving now?

Glenn Waco: Life circumstances. This past year and a half has just been super stressful. I dedicated my life to the social justice aspect of what’s going on in the town, and it’s weighed on me a lot mentally.

I’ve had a lot of losses in my family [recently]. I buried my mother—my great-grandmother, but I refer to her as mother. I always was looking to move to California in 2016, but it just seems like life has been pushing me out there. So me and [my partner] Alia Zin made a split-second decision, and we just went for it.

I don’t just make moves to say I did it. I already have a lot of stuff lined up and Alia does too. Since I met her, we’ve been building and helping each other out. My resources are her resources, and her resources are my resources — that’s my girlfriend. The thing is, the roles have kind of been switched. When she first came [to Portland] it was like I had the connections, and she was initially able to get plugged into everything. Now, on the flip side, she’s going back to Cali, I’m going to live with her and it’s like her opportunities are mine too.

I have a lot of different opportunities waiting for me out there, and I want to use my different resources to bring what I get back to the town. So I’ll still be able to help the scene, it’s just from a different vantage point.

TSN: You’ve really been pushing the #DontShootPDX movement, and that’s been part of how your clout has grown. Will you continue community activism in Cali?

GW: I’ve always had that mindset that I went into Don’t Shoot PDX with, just wanting to help my community, wanting to affect people, wanting to effect some type of change, leave some type of imprint on the world and just lend my opinion and help facilitate that any way I can. I’ve always had that, even before I got into [activism]. So when I got into that, it was like, ‘Alright, [it’s time to] walk my talk,’ the physical action of it. So I take that in my music. My music is my protest. Just the same as me being in the streets, or going to classrooms and talking to kids about the prison industrial complex, or simply typing out my thoughts and facilitating dialogue on social media — I’ve always tried to do that.

I’m always going be supportive of the local movement. Teressa Raiford [lead organizer for Don’t Shoot Portland], she was my connection to getting involved, and she's been at it non-stop. If anyone I meet wanted to know what's been going on she would be the person I'd forward them to.

TSN: You’re one album deep; a lot of people are behind you. How’s that feel now that you’re leaving?

GW: NorthBound was originally supposed to be an EP. And then the idea just kept formulating into an album. From something that small to turn into what it’s turned into, to have people around the country, and really around the world inboxing me about it, it’s no feeling to really describe that. But I have to utilize the influence that I’ve gained from my music and from being a community leader into the next project, titled “Human.”

At the end of the day, home is always going to be home. Everyone I know is from here—[outside of] my Dad’s side of the family, but everyone I’ve grew up around and knows me is here. So I don’t look forward to leaving in that aspect, but I do look forward to taking advantage of these opportunities that are set for me, so I can bring the resources back and shine light on the city a little bit more.