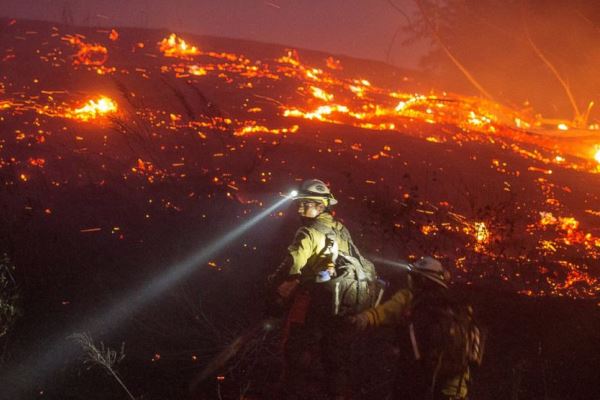 Crews tried to beat back blazes raging across the parched West on Wednesday, complicated by high winds in some places and resources strained by the amount of flames. Here's a look at large wildfires in several dry Western states:

A wildfire burning for weeks on the western slope of the Sierra Nevada grew substantially Wednesday and led to the evacuation of more than 2,500 campers, hikers, employees and residents in central California.

Warm, dry weather could pose a challenge to firefighters trying to stop the blaze tearing through timber, brush and tall grass in the Sierra National Forest. Sparked by lightning July 31, the fire expanded to nearly 48 square miles and was largely uncontained.

About 100 miles to the southwest, crews dogged by persistent winds protected 339 homes threatened by a wildfire near Santa Margarita, a rural town north of San Luis Obispo in the Santa Lucia Mountain foothills.

About 800 people remain evacuated from the small town as the nearly 4-square-mile blaze chewed through steep terrain in San Luis Obispo County.

More than 10,000 firefighters are trying to combat 16 wildfires in California.

A blaze in eastern Oregon that destroyed 36 homes and threatened 500 more has become the nation's top priority for firefighting resources Wednesday.

The alert for the fire about 150 miles east of Portland was based on the danger to people and homes and the closure of a highway that is a major artery for the region and cuts through the fire perimeter, said Carol Connolly, spokeswoman for the Northwest Interagency Coordination Center.

Since starting from a lightning strike last week, the fire has burned through 75 square miles, mostly in the Malheur National Forest. There are 649 firefighters assigned to the blaze, one of 11 large fires burning across Oregon.

U.S. Forest Service Chief Tom Tidwell and Gov. Kate Brown were to be visit the fire command post on Wednesday at the Grant County Fairgrounds, where food, clothing and household goods for victims were being handed out.

Firefighters braced Wednesday for high winds and heat that could fuel wildfires that have evacuated towns and destroyed houses in Washington state.

Winds were expected to increase to 20 mph by Wednesday afternoon as temperatures climb above 90 degrees, producing more problems for crews combating a wildfire in Okanogan County that has forced the small town of Conconully to flee, officials said.

The evacuation order was issued Tuesday night as the blaze keeps menacing the town of about 200 people, fire officials say. But the fire has not yet reached Conconully, in the eastern part of the state.

Meanwhile, authorities battled large blazes near the mountain resort town of Chelan in central Washington. The complex of fires has grown to 67 square miles and destroyed 36 houses.

More mandatory evacuations have been ordered in northern Idaho and other residents have been told to be ready to leave as a group of fires burning timber and brush in rugged terrain expanded to more than 100 square miles Wednesday.

It's not clear how many residences are involved or how many people have been forced from their homes near Kamiah. Shelters say they're having a hard keeping up with the number of evacuees.

The fires destroyed 42 homes earlier this week but there have been no reports of additional losses. More than 850 firefighters are battling the blazes, which are only partially contained.

In west-central Idaho, visitors to part of the Payette National Forest are being evacuated due to a 9-square-mile wildfire.

The houses are in a canyon on a highway north of the small town of Noxon. One fire is burning about a quarter-mile away from the nearest home, fire information officer John Head said.

The residents of at least 20 more residences south of the evacuation area have been given notice that they may have to leave, too.

© 2015 The Associated Press. All rights reserved. This material may not be published, broadcast, rewritten or redistributed. Learn more about our Privacy Policy and Terms of Use.