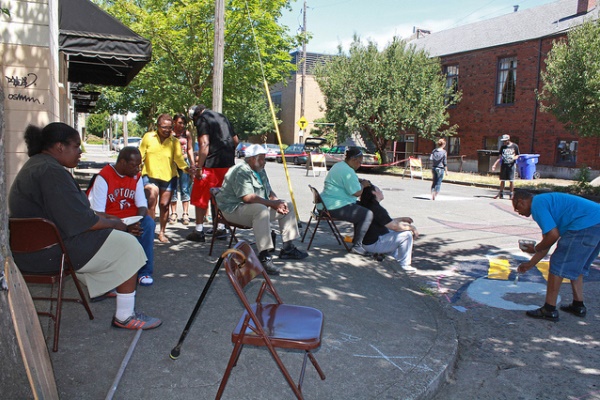 Ask Nicky today, and she will say the gang wars she once front-lined for are “pointless.”

Stopping today’s youth from following her path by  joining the ranks of this same “pointless” war she and so many other thousands have fought since the late 1980’s is the reason she has launched the new initiative Neighbors Against Violence.

The alliance comprised entirely of female ex-gang members—some once rivals—aims to steer young people into job opportunities, camps, and provide scholarships with the hopes that paths like these will fulfill their bottom line, “trying to save some lives.”

Most organizations combating  the ills of gang-life tend to be male-led and male-centric as the overwhelming majority of those in gangs are young boys—but the ladies of Neighbors Against Violence are taking a different approach.

“The girls are the ones having the babies and having to raise them when these men die,” Lunita Renfrow, one of the group’s members says.

“The girls are the ones that are stuck afterwards and end up having to be single mothers and not being able to take care of the kids, or the kids keep going back to the street and raising little gang members again.”

Renfrow adds that though they will keep their focus on women, certain resources like scholarships will be available to boys as well.

But they also hope to other services such as daycare so mothers can go to school.

Neighbors Against Violence acts only as an initiative at the moment, but Taylor, the group’s creator, says she is working on getting it to 501c3 status.

After 24-year-old Andre Lee Coggins was killed in one of the city’s three gang-related homicides last year in her North Portland neighborhood, Taylor says she was ready to move head first into the idea -- one she says she’d been sitting on for close to three years.

She began reaching out to the women she felt could translate their tales of street life into inspiration for the kids of today, putting any remnants of animosity to the side.

How? They were all friends at one point. 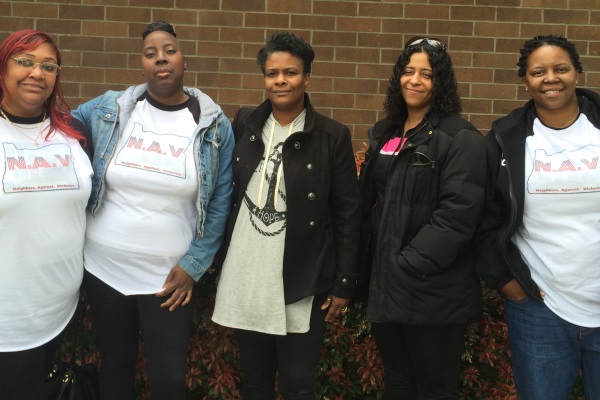 These women, all former gang-members have all banded together to provide youth with alternate paths to street life with the formation of their new initiative: Neighbors Against Violence. Pictured here from left to right are: Lunita Renfrow, Dyrenda Waller, Loretta Rogers, Selmene Rodriguez, and Nicole Taylor. --Photo by Donovan M. Smith

Since forming, the women have been doing presentations and small-scale community events throughout the city using as an entry piece Taylor’s autobiographical book penned  in 1998, “Ask Nicky…A Young Person’s Workbook for Building Dreams.”

The book works more or less as the group’s “Bible” right now, detailing real-life scenes from Taylor’s life. The goal is for kids to use it as critical thinking to debate how she could best have handled her adversities, growing up as a youth influenced by gang culture.

Taylor’s initiative comes during a time when gang violence is on a noticeable uptick, after nearly a decade of record lows. City officials say the violence peaked in 1997, when 15 died in gang violence citywide.

Many others who did not lose their lives were hurt in other ways, with lengthy prison sentences or criminal records that prevent job opportunities, leaving the long-neglected and impoverished residents of the city’s North and Northeast an even more unstable community.

Unlike the time they came up ‘banging, they say much like the ever-gentrifying areas they once branded their allegiances to (neighborhoods like Woodlawn, and avenues like Kerby) there is a growing disappearance of organization within these gangs.

“So it’s just [kids claiming a gang] then seeing each other and [having a conflict],” says Renfrow.

“There’s no rules to this. It’s not like it used to be before. It’s extremely scary,” adds Rodriguez.

Nonetheless, the women say they are taking responsibility for their pasts and trying to plant positivity and opportunity into today’s generation with community organizations, schools and churches alike.

“When they start seeing that we’ve come together as a collective, we’ll be able to tackle the streets and those youngsters.”

At one of their first events as a collective, Neighbors Against Violence were approached by a young girl.

“Are all of them your sisters?” the girl asked.

Neighbors Against Violence will be serving up home-made goods this week at First AME Zion Church (4303 N. Vancouver Ave.) , Friday and Saturday, May 15-16, as part of a fundraiser to start their own summer camps.

Friday, chicken is the main menu item coming in both regular and spicy flavors, with french fries and toast as sides, and dessert.

The following day’s menu includes spaghetti and fried fish, accompanied by garlic toast and dessert.  All meals come with your pick of water or soda.