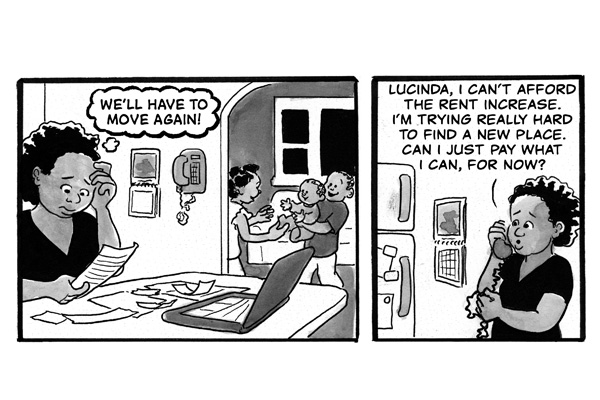 Candace walks up to her apartment and finds an eviction notice taped to the door. She had been behind on her rent and making partial payments, but her landlord wants her out. Clutching the notice, she wonders what she is going to do.

Candace’s tale is one of three stories represented in the new Community Alliance of Tenants’ comic book “Know Your Rights: Don’t Get Evicted.” The free comic will be released on March 30 at the Oregon Public House.

The comic book is a reference to help people understand their legal rights as a renter. It covers the process of eviction and what to do if you are faced with eviction. It also addresses termination notices, evictions court, being locked out by a landlord and more.

Educating people on eviction is a formidable challenge according to Justin Buri, executive director for the Community Alliance of Tenants.

“There are so many different ways that evictions take place and so many different possibilities that happen through the process,” Buri said. “It’s been hard for us to really convey the entire process when we are talking to tenants that don't have an immediate situation.”

CAT is the only statewide, tenant-led tenant’s rights organization. They educate about these rights through their Renters Rights Hotline 503-288-0130, their Landlord-Tenant Law Booklet and community outreach workshops.

Often, the CAT volunteers will help tenants write letters to their landlords and support them through the eviction legal process.

Buri acknowledges that evictions are often a terrifying experience and tries to alleviate that with education.

“Not a lot of people know about (eviction), it carries a lot of weight in terms of losing your housing and destabilizing communities,” Buri said. “Sometimes it can feel like a dark hole for people.”

Evictions are a part of a much larger affordable housing crisis. Research from the National Association of Realtors (NAR) has found that skyrocketing rent costs are far outpacing wage growth. Between 2009 and 2014, Portland rents have increased 20.45 percent, the 6th highest increase in the nation.

These homes in low-income areas which used to be purchased by first-time homebuyers have been increasingly acquired by developers. A recent report by Governing magazine found Portland to be the most gentrified city in the United States.

The report tracked census data from 2000 to 2010 and determined that 58 percent of Portland’s lower-priced neighborhoods had been gentrified. The national gentrification average is a 20 percent of neighborhoods.

When facing a possible eviction, Buri suggests two things: calling the Renter’s Rights Hotline to speak with an evictions specialist, and preparing good documentation of your rental agreement and landlord communications.

“If the tenant and the landlord have a good communication with thorough documentations, sometimes it is much more likely to come up with an agreement with your landlord and negotiate something long term,” Buri said.

Landlords need to provide only a 30-day notice to increase rent. Coming to an agreement with a landlord can give more time for the tenants to find other housing.

Tenants are not often aware of all of their rights. Buri said most people don’t know that a landlord needs to give 24-hours notice before entering your home.

People with disabilities also have housing protection through the Fair Housing Act. One of the stories featured in the comic shows a disabled man in a wheelchair requesting a reasonable accommodation to avoid eviction.

“Evictions can be very traumatizing, or inevitable, often. We hope to at least be able to help tenants that can avoid an eviction arm themselves with the right information and preparation so they can make the right decisions,” Buri said.

The “Know Your Rights: Don’t Get Evicted” comic is part of a year-long partnership between the Community Alliance of Tenants and Know Your City. The stories were developed by the first-hand accounts of people called the CAT Renter’s Rights Hotline.

The comic was inspired by the work of The Center for Urban Pedagogy, whose Making Policy Public initiative uses graphic design to explain policy. The work is funded by the Regional Arts & Culture Council and the Sappi Fine Paper’s Ideas That Matter grant.

Illustrator Becky Hawkins and CAT members who helped write the stories will be at the comic release event on March 30. The event also serves as a fundraiser for the Community Alliance of Tenants and Know your city. For the entire day, a portion of all food and drink purchases will be donated to CAT and KYC.

The comic will be available at the event and at the Know Your City office at Union Station. Digital copies of the comic can be found on the CAT and KYC websites.

For more information about the comic and the release party, click here.