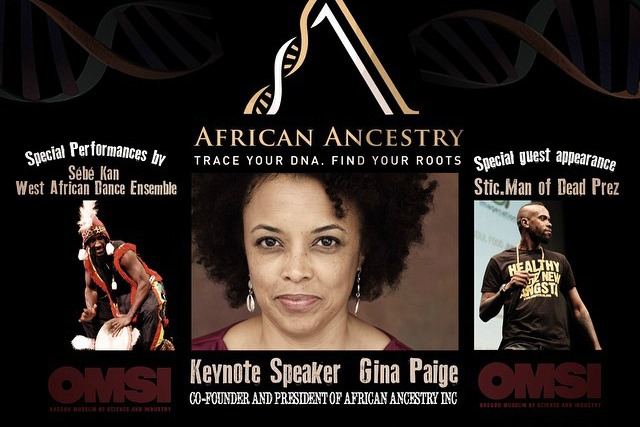 Tracing Black heritage is often a difficult task. White people can trace their genealogy through birth records, death records and census data. But due to the devastating effects of the Trans Atlantic Slave Trade, African American people are often faced with a paucity of information.

Where culture fails, science can now help African American people trace their roots and have a deeper understanding of their identity. On Friday Feb. 27, OMSI is presenting an evening of art and science about genetic testing, African culture and discovering one’s lost heritage.

“Without genetic ancestry tracing, there really is no way for an African American to know where their ancestry was prior to the slave trade,” Paige said. “The system of slavery was designed for complete disconnection.”

Paige is the keynote speaker and her speech will cover the historical context of ancestry tracing and the science behind genetics.

The event will also feature a drum and dance performance by the Sébé Kan West African Dance Ensemble and a special guest appearance by Stic.Man of Dead Prez.

Event organizer Karanja Crews brought Stic.Man to OMSI as part of his documentary “Sounds of Our Roots.” He has been reaching out to hip-hop artists to help them discover their African ancestry with the intent on creating a soundtrack inspired by this journey of identity.

A highlight of the evening will be the public revealing of the genetic heritage of Stic.Man, local artist Mic Capes and other audience members who previously submitted their DNA for testing.

The submitted DNA will be compared to the DNA samples in a lineage database. African Ancestry Co-founder Rick Kittles spent over 10 years working with historians and anthropologists to develop this collection of genetic information.

The result of the genetic test will tell the person which present-day country in Africa they originated from. In many cases, the test can also determine their specific African ancestral ethnic group.

Paige has witnessed a number of people get their genetic test results and says it is a stunning experience.

Crews learned his genetic history last year; he has Nigerian roots on his from both sides of his family tree. His mother’s people came from the Yoruba tribe, while his father’s people were Igbo. This new information has changed his overall sense of identity.

“I identify myself now, not as two continents - African American, now I can say I'm Nigerian American,” Crews said.

Paige describes this work as being cross-cultural -- where previously there was a void of identity and connection only to a broad continent, African American people can find kinship within a shared history and culture.

“It helps Black Americans, Black people in the diaspora to dispel some of the stereotypes they may have been raised with about Africa and also helps Africans to connect better with the descendents of Africa,” Paige said.

To RSVP for this event, click here. The event has now sold out.